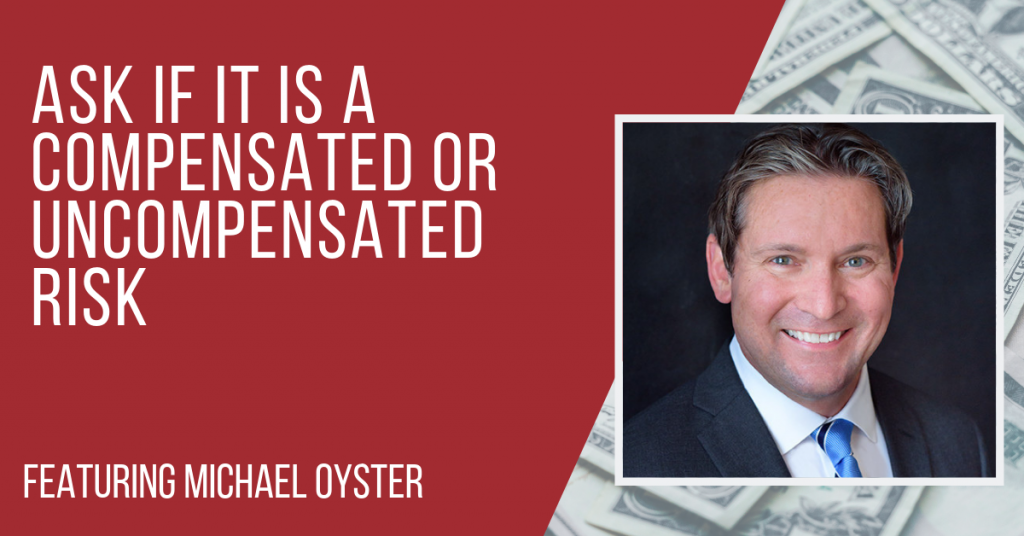 Michael is the author of countless papers as well as two books: Mission Possible, Achieving Outperformance in a Low-Return World, which was published by Dearborn Trade in 2005; and his new book, Success in a Low-Return World was published by Palgrave Macmillan in November 2018. Michael is a graduate of the University of Cincinnati with a BBA in finance, a CFA charterholder, and a CAIA charterholder.

“Now I’m thinking this is the worst possible case scenario. And it really ended up being a terrible situation because everything that I had put into the portfolio that I thought was a terrific long term investment turned out to be absolute garbage.”

In the middle of 2014, Michael was head of the portfolio management team at FEG, a group of talented people who advise institutional investors, and non-profit institutions, which are mostly endowments and foundations. His job at the time was to build portfolios for the clients that had given them discretion. Within a range of asset allocation targets, he and his team could build portfolios out of whatever investment ideas they thought were going to make the best return on investment with the least amount of risk. He was the primary investment person, part of a team, but he ultimately was responsible for the decision on what was the best for the portfolio.

Based on firm’s philosophy, portfolio is diversified well

His firm believed: it should take a very long-term approach with investing; valuation criteria should drive investment decision, that portfolios should be built out of cheap investments, not expensive; and, in the importance of diversification in portfolio construction as it is a good risk mitigator that opens opportunities to other areas of the investment world that you might not otherwise consider. Philosophically, that is where Michael and his team were starting. At the time, his investment choices were diversified into such directions as domestic equities, international equities, emerging markets, many types of fixed income, commodities, master limited partnerships, and real estate investment trusts.

But then in the second half of 2014, something terrible happened for Michael’s portfolios. It was the beginning of the United States’ flooding of international oil markets with increasingly more capacity, and the start of the realization of what US fracking was doing to unlock the massive amount of supply coming out of the country. So the oil price collapsed. The price of oil is inversely correlated to the US dollar, meaning that the dollar rose strongly in value.

So now he had two facts working against him. He has commodities in his portfolio (for diversification) and they are being crushed as the price of oil is collapsing. All the while, the dollar was strengthening, meaning all his emerging markets and other international investments were affected as in the value of currency in those offshore spaces was weakening rapidly, inevitably damaging his investments. Emerging market currencies were collapsing, because they were working inversely relative to the dollar. At the same time, China’s economic growth, which had been skyrocketing for years, was slowing a lot faster than people had expected. So you had emerging markets, currencies collapsing and China’s weakness putting even further downward pressure on their own currency, plus those of all of the emerging market countries that sold products and raw materials to China were not growing as much.

It was the worst possible case scenario and it put him in a terrible position because everything that he had put in the portfolio that he thought would be a winning terrific long-term investment turned out to be absolute garbage for many years. He and his firm lost clients due to this bad performance and it was a situation that took a long time to recover from. He and his team were building portfolios based on what they had established as a long-term, fundamentally strong investment philosophy, but it was completely wrong. When clients left as a result of bad decisions on his part, he said, it was extremely painful.

Currency risk can have a dramatic impact on your investments

This is especially true if an investor has an excessive allocation or an overweight situation to portfolio contents that have a high degree of concentration of that risk.

“I had a high degree of concentration of risk in currency, which I didn’t really fully appreciate at the time.”

Investors can take risk in excess of what is justifiable based on an expected return. Currency is a very real risk that does not exhibit a commensurate amount of expected return.

Consider diversification even away from fundamentally sound targets

This is because ordinary diversification tactics may not work all the time.

Do research on and understand momentum

Avoid limiting research to whether asset categories are expensive or cheap. Go beyond that and look at their momentum and fine-tune your asset allocation based on how they are performing. Then go with the positive momentum and avoid the negative.

“We should more than happily accept risk for a commensurate amount of expected return. But we should avoid risks that don’t have a return that justifies taking that risk.”

Understand your risk relative to factors rather than asset classes

Ask to what extent you are diversified? What are you missing?

The risk-return relationship of a currency is different from all other assets. Currency doesn’t provide a return commensurate with the risk involved.

Always ask yourself: ‘What can go wrong?’

Be completely honest and objective and ask yourself what can go wrong? Especially early in your career. You get excited about an idea and you’re only looking at the positive outcome. The challenge is to see if you’re strong enough emotionally at that point to be able to ask this question. Sometimes you really have to force yourself to do it. But, if you can, then it can help you sidestep some of the pitfalls that many of us have stepped into over the years.

“Take the intellectual challenge, to be able to truly investigate what could go wrong. And I think, if you can do that … not only are you saving yourself potentially from this type of mistake, but you’re also strengthening your ability to analyze situations objectively, and that is a valuable skill.”

In the next year, Michael is going to continue to tell the story of the fact that we are entering in a low-return world and how investors need to be objective about that and plan for it accordingly.

It is hard to look in the mirror and say, “I could have done better here.” Michael said that the strongest among us, who can survive in this brutal investment field and remain professional for any length of time, are those who look at their mistakes and grow from them.