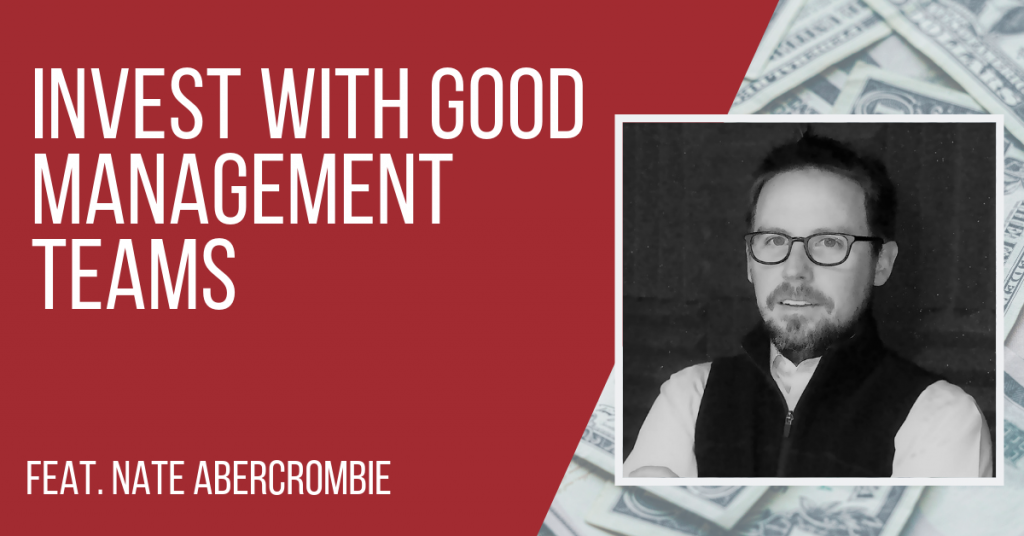 Nate Abercrombie lived in Syria for two years trying to learn Arabic before attending graduate school. He had hoped the language skills would help him secure a job in the oil and gas industry. Ironically, he ended up working in the renewable energy industry as a financial analyst. He loved having the opportunity to analyze and research large capital projects, but financial analysis in the wind energy business can become very repetitive. He needed a new challenge and equity research was something he really wanted to do. Nate then got a shot at Janus Capital Group (now Janus Henderson Group). It was a phenomenal learning experience and he got to know some great investors. But Nate ultimately came to realize that corporate objectives were often misaligned with fund-holder returns, so he started thinking about his next steps.

Something he really did enjoy about the equity research process was meeting management teams. Considering that the average investor never has the chance to listen to management, Nate decided to start his podcast, Investing with the Buyside, which has now become The Stock Podcast, and is described as: “The only investing podcast that gives everyone the chance to hear fireside chats with public company CEOs and CFOs regarding their business, industry, and financial outlook.”

“In autumn 2018, the company decided it would cut its distribution (dividend payout) by 67% … the stock went down something like 45%. So when I bought in, it was probably at around US$10/share, and it declined to about $5/share. But then over the next few days it just kept going down.”

Nate said he has made a couple of bad investment missteps, but the one he spoke to Andrew about was one that remains in play as he still owns some of the shares in the company he mentioned. As an energy industry financial analyst, he covered the midstream space (“Midstream” is a term used to describe one of the three stages of oil-and-gas industry operations, and delineates the processing, storing, transport, and marketing of oil, natural gas and natural gas liquids). One of the things he did as an investor was that he could invest outside of the portfolios he was managing, but also invest in some of the stocks he was not covering that were within his sector.

He was a big investor in exchange traded funds (ETFs), because it was very difficult to trade in and out of individual equities back then. Also, he had been cleared to invest in a couple of midstream stocks on an individual basis, and one in particular was Sanchez Midstream (SNMP:US, SNMP.K), a subsidiary of Sanchez Energy (SN.US), an oil and gas exploration and production company in the United States. These companies pay a lot of their profits out to investors, but in this industry, rather than call them “dividends”, they call them “distributions”. The distributions that they were paying out at the time were very attractive, some in the double digits, and Sanchez Midstream was no exception.

Nate had been exploring what was going to come next for his livelihood. He was thinking about starting his own podcast and that he was going to need extra income. Sanchez Midstream was paying out a 20% distribution yield, it had a very solid balance sheet, and it had growth. The important indicator for a midstream company, Nate pointed out, is to see volume growth in its system. And that was there too. Despite the contemporary commodity price collapse, there were some quarters during which volume growth had slid a little. But by the same token, its distribution looked very stable, because most importantly the distribution was covered more than one time. Rather than call it a payout ratio, this sector does the inverse, and calls it the coverage ratio. So as long as coverage is north of 1x, that means that they have enough cash flow to pay that distribution out.

Things were looking good. Nate even had a member of the Sanchez Midstream’s management team on his podcast to talk about how positive the outlook was and how well things were going. This was a stock he had bought thinking that it was going to provide him with an income, just given the fact that he was moving to a new career and that his outlook was not very bright from a revenue standpoint. So he bought and owned the stock, and had management on his podcast to talk about the business and they said how well the company was doing.

Then, in the autumn of 2018, the company decided it would cut the distribution 67%. When that happens, the stock usually goes down a lot. That day, Nate recalled that the stock fell by around 45%. So when he bought it, it was probably around $10 a share, but after the announcement, it declined to about $5 a share. Then, over the next few days, it just kept going down. The parent company, Sanchez Energy, was also going through its own financial difficulties. They’re currently going through a strategic decision–making process to decide on the best next steps for the company. Nate, as an outsider, has no accurate insight into what will happen with Sanchez Energy, but there’s a good chance that is it going to either restructure its debt, be bought out or bondholders will end up owning the company. From his perspective as an investor in the midstream company, his thought process is always that the firm will probably come out of this period doing alright.

So the stock is now at around $2 a share, the company pays a 60-cent annualized dividend, which amounts to a 30% yield. The coverage last quarter was at around 1.4x. Therefore, Nate still has some hope, but he described the whole experience as a very painful lesson for an investor.

Listen carefully to what management says, and what they don’t say. This discipline is part art and part science. Investors need to learn to sense and arrive at a solid opinion as the whether or not management is being completely forthright, truthful, genuine, and honest.

“There were probably some … red flags that cropped up that I may not have paid enough … attention to … (this would include) the fact that they (management) didn’t really want to talk about the distribution (dividend) all that much.”

Ensure you’re as diversified as you can be. That means not relying too much on any one company. Andrew suggests to Nate that if he wanted to get income from a midstream company, maybe it would have been a better idea to own shares in five or 10 of them. Diversification teaches us to forgo the really high return from perhaps one of the companies in exchange for reducing the risk when one or two companies go bad. Sadly, if all midstream companies suffer, diversification by adding just other midstream companies to your holdings may fail to protect you.

Management almost never tells you the risks. They are however always excited about their story and it’s very hard to get information about risk. We also have to remember that management can’t tell you the risks. If a risk is very real, ethically and legally speaking management must announce that to the overall market, not just analysts or investors. So Andrew likes to think that as we invest, the very reason we like to invest with a company is because management are so optimistic and positive, and they are creating this business. But that warmth and trust in management can also be the seeds of destruction.

Meetings with management do not add much value. Andrew says this after observing about 1,000 meetings between fund managers and analysts. This is because the fund manager could have gotten almost all the information in the meeting from the company’s website.

Many fund managers confuse understanding a business with getting a benefit from investing in it. Sometimes understanding the business more deeply can actually be misleading, because you start to build confidence that you really know the management, the company and its goods and services. This can sometimes blind you.

Andrew’s take on that

Nate is trying to figure out what he will to do with his podcast. It’s harder than he ever thought to grow a podcasting business, but he also has some ambitions of becoming a fund manager, and he would love to manage money again. His goal therefore right now is to get back into the investment management business, where he can help fund holders, shareholders or investors make a lot of money, and also grow the podcast.

“If I can do both (fund management and podcasting), that’d be perfect.”

Talking about our worst investments is maybe one of the most helpful ways of learning lessons in the investing world.