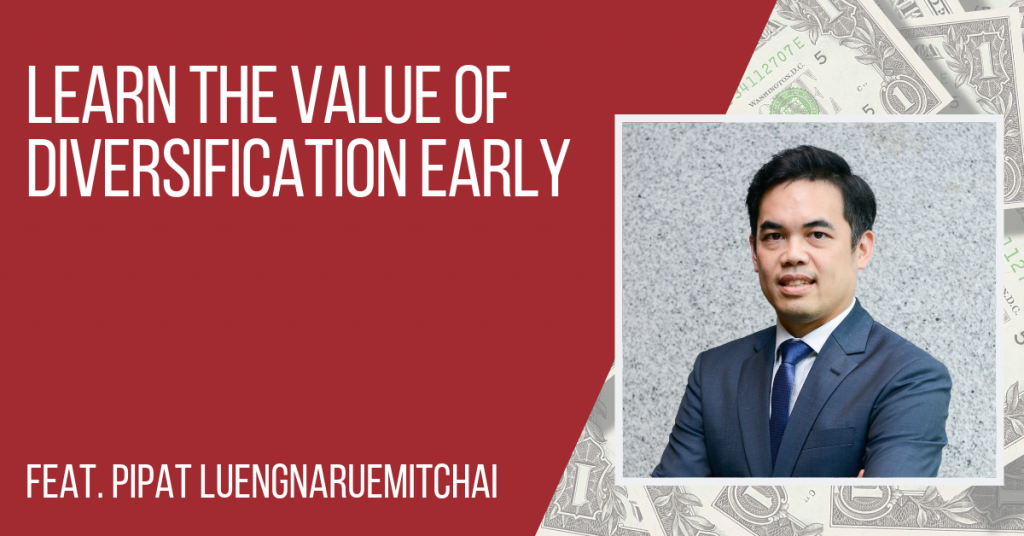 Pipat Luengnaruemitchai is an assistant managing director, the co-head and chief investment officer of the office of wealth management, and the chief economist at Phatra Securities. He leads a team of analysts responsible for giving clients investment advice on global asset allocation and product selection. Previously, he was a research analyst covering the Thai financial sector at the same company. Prior to joining Phatra Securities, he was an economist at the International Monetary Fund in Washington DC, where he worked on several policy and market issues, including monetary policy and financial markets. Subsequently, he was a senior research analyst at Mellon Capital Management (now Mellon Investments Corporation) in San Francisco, where he worked on global macro fund strategy. Pipat received a PhD in economics from the University of California, Berkeley and a BA in economics from Thammasat University.

“We have to at least understand exactly what we are getting ourselves into when it comes to investments.”

Pipat’s story starts during the rally before the global financial crisis in 2008. Around 2006-2007, “nothing” could stop the very bullish market. Pipat was already invested in equities but had little time to focus on individual stocks, and instead had holdings in passive, managed equity funds. Buoyed by optimism from successes with those funds, he felt adventurous enough to try investing in individual stocks, but he didn’t know which stock to buy. His very first stock was Apple Computer (Apple Inc., AAPL:US; AAPL.OQ), which actually became his best investment ever.

Later on, however, he was consulting with some engineering friends working in the San Francisco Bay area at technology companies, so he asked for a tip. One suggested OmniVision Technologies (OVTI), which Pipat had never heard of. He was informed that the company produced and designed advanced digital imaging for mobile devices. As not many mobile phones had cameras back then and that he was told every mobile phone would need such tech from now on, and that this friend worked for one of the biggest chip producers in the area, it appeared the stock was a winner.

The next day Pipat came home and bought about US$3,000 of OVTI. It went up considerably at the outset, but when he looked at it a year and a half later, his holding had crashed down to total value of around $500. So he felt a loss of about 80% from his original investment within a year and a half. Part of the loss can be blamed on the global financial crisis, because the value of the market was cut in half anyway, but his more diversified equity fund lost around 30%-40% on the value of the funds invested. So this was one of his biggest losses in percentage terms.

He went on to explain that close to the bottom of the market, he had sold his holdings for around $600. But after that, it rebounded again.

A good company, a good story, doesn’t necessarily make a good investment. This is a classic lesson, but it is sadly one that many people have to figure out for themselves through pain. When you hear a good story about excellent past return that someone has made, it is human nature to think that this upward story will continue. But it doesn’t guarantee that it’s going to be good investment for the next investor. Many things must be considered, such as the valuation, the growth, the momentum and much more.

Investigate any tips. Do not believe in or rely solely on a friend’ advice. You have to do your own study, your own work and be convinced by your own analysis. Then if you make a mistake, you can take responsibility for it rather than blame a friend.

Diversify: Whatever you do, don’t put all your eggs in one basket. Pipat’s loss could have been a lot greater but he already had savings invested in an equity fund. So the foray investing in OVTI was more of an adventurous type of play.

Do the work. After interviewing and reading the stories of loss of many people, Andrew has arrived at six basic types of mistakes, general categories of mistakes that people make. No. 1 applies here, and it is: Failed to do their own research. Nothing in this life comes without some work, and this applies just as much to investing.

Pipat didn’t lose all his money for good reasons. He had already diversified most of his savings. He didn’t commit all of his overall assets or all his funds to one idea. But, he did also learn the core lessons that make him a better financial advisor and analyst for his clients today.

Diversification is very important. If you have a diversified portfolio, you can reduce the risk to your overall wealth and manage your portfolio according to your risk profile, which is very important. The risk level must be suited to your needs, whenever you make decision about investments. In the past year, the whole equity market fell 15% globally. If you have a diversified portfolio and you don’t have 100% of your wealth in equity markets, you’re not going to suffer a big loss.

Stick to what you know best. Many people believe in investing in individual stocks. But if an investor doesn’t have the time or want to exert the effort to do all that homework, maybe the best role for them would be as an asset allocator.

“Take care of my health and wealth are my two key words. I try to exercise at least three times a week.”

“I want to do my best in terms of my job and responsibilities and try to achieve advance further in my career and deliver what I have promised up-line managers.”

“I hope my lesson is going to be something that you (listeners) can apply for your own investments and helps you try to avoid the losses. Good luck with your investments.”