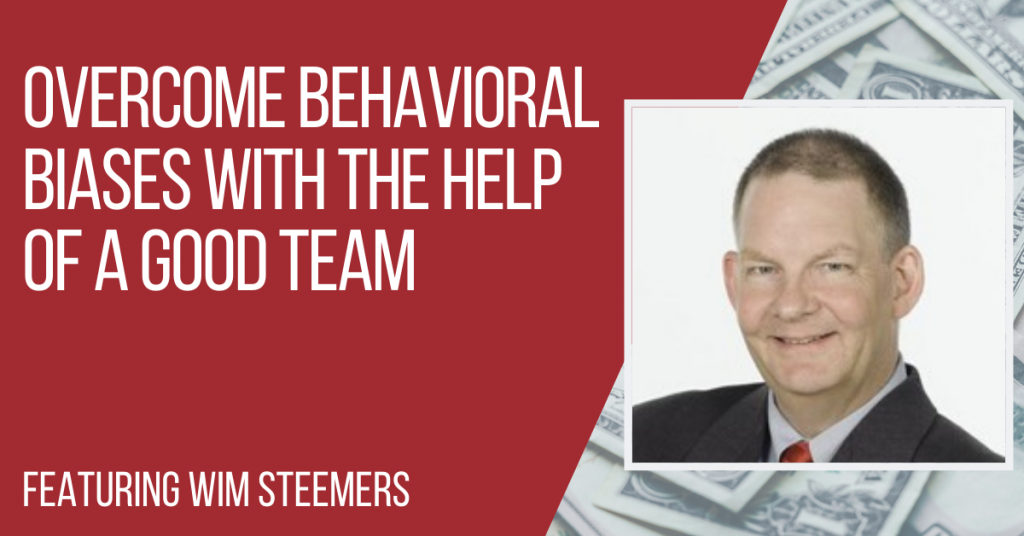 Wim Steemers has a 30-year career working in over 40 countries around the world, of which the last 20 years were spent in fund management at AllianceBernstein, Macquarie, Colonial First State, and AL Capital.

While educated at the University of Chicago’s Booth School of Business, he always had his doubts about the Efficient Market Hypothesis, and he followed the development of Behavioral Finance over the years with keen interest.

While he has a traditional fund management role at AL Capital, he spends his free time with his

Rosevalley Funds, where he puts into action what he suspected for a long time: there has to be a way to take advantage of the systematic biases that exist in human behavior.

“People do not always behave rationally. They make errors in a particular direction, and if you’re aware of these behavioral biases, you’re gonna make money.”

In 1999, a new technology of doing laser operations on eyes to correct vision piqued Wim’s interest. Wim had been wearing glasses since he was four years old, so anything to correct his vision was bound to interest him.

Though the technology was relatively new, it had been proven to work, but it was still quite rare and expensive. Wim, however, decided to do it.

Falling in love with the product

The laser procedure took about 15 minutes, and voila Wim had perfect vision. For 30 years, Wim had not been able to see further than a meter ahead without glasses. When he walked out of the room, and he could see perfectly. It was literally as if the sun had risen for the first time in his life.

The machine used for the laser procedure was big and cost a million dollars at the time. It was made by a Canadian company that was listed in the stock exchange. When Wim walked out of that operation, he was so impressed and believed that this machine was going to take the world by storm. So he bought shares in the company that made that laser equipment.

The company wasn’t as good as the product

Within about a year, Wim lost all his money after the company went bankrupt. Wim had done no research and simply thought that the laser machine was so great the company must be doing well.

So it turned out that there were competitors that had cheaper products and better laser machines. So the company just couldn’t compete, and that’s how Wim lost all his money.

Delving into the Korean investment market

In the year 2000, while working as a junior analyst, Wim got a chance to delve into the Korean stock exchange. At the time, Asia was just getting out of the 1997 Asian financial crisis.

The crisis caused widespread bankruptcies as banks in Asia continued to fail. Banks now had to find new ways to attract customers.

Banks in Korea discovered credit cards. Credit cards hadn’t existed in Korea before, and the only credit card as we understand it, which means you can rollover the balance and borrow money, was Citibank’s.

What existed were charged cards that were automatically debited at the end of each cycle. You couldn’t use them to borrow money, so they weren’t actual credit cards. Credit cards hence became a nice source of income for the banks.

The government loved the idea too

The Korean government saw this as an opportunity to stimulate the economy. But more importantly, when people pay with credit cards, the government could track those transactions making it easier for taxation purposes. So the government put in measures to promote the credit card idea.

Looking into investing in banks

As a junior analyst, Wim had prepared a research package, and his recommendation was to buy the shares of Kookmin bank. Kookmin bank was one of these banks that had a rapidly growing credit card business. The bank had a separate entity called Kookmin credit card, which they had listed on the stock exchange. Wim liked the idea of investing in this bank because it was more diversified with a business bank and a deposit business.

As a professional analyst, Wim was not quick to make the recommendation. He did his background research first. He had a few doubts, but it happened that every objection he would make in his analysis and every risk factor he would flag, mostly, there was an answer for that.

Buying into the stocks anyway

The company went ahead and bought Kookmin bank shares. Shortly after, credit card arrears started to rise rapidly, then they became relentless, and soon the share price started to go down. Now all the credit card companies in Korea were releasing monthly arrear stats and aging profiles.

As the analyst responsible for the stock, Wim did his research and was able to predict that things would only get worse. Shares prices had now gown down by 50%. When a window of opportunity showed up, Wim went to the chief investment officer and the portfolio manager. He told them it was time to cash out.

Wim explained to them that they would make all their money back in the next 18 months; however, when the shares start going up, Kookmin bank would take out the minorities and keep all shareholding inhouse. Thankfully, the bosses listened and sold the company shares before that happened. Unfortunately, the company had lost about 50% of its investment money.

Liking a product doesn’t make the company a good investment

Buying a stock in a company because you love the company’s product is not a good strategy.

Stand up for your convictions

As an analyst, always fight for and state your convictions unapologetically. Also, avoid groupthink because it is a potent but dangerous thing.

Be wary of something that seems too good to be true

Cultural biases are not a guarantee of the success of an investment. Put culture aside and do your usual due diligence when conducting your research.

Risk management is not always straightforward

The job of risk management, ultimately, is to say, we know the risks, and we’ve got them covered. But the reality is, it just doesn’t happen that way.

Make your buy-sell decision after your research

It’s imperative from an analyst perspective when analyzing a situation that you do not make your buy-sell decision until the end of your research process.

Avoid groupthink at all costs. However, to be successful at investing, you need a team approach, but make sure that the team is set up properly.

The company Wim is working with has a grand vision of turning the small idea they have now into something bigger. Wim’s number one goal for the next 12 months is to see that through.

“Don’t learn from your mistakes; learn from somebody else’s. So please, listeners learn from these mistakes.”