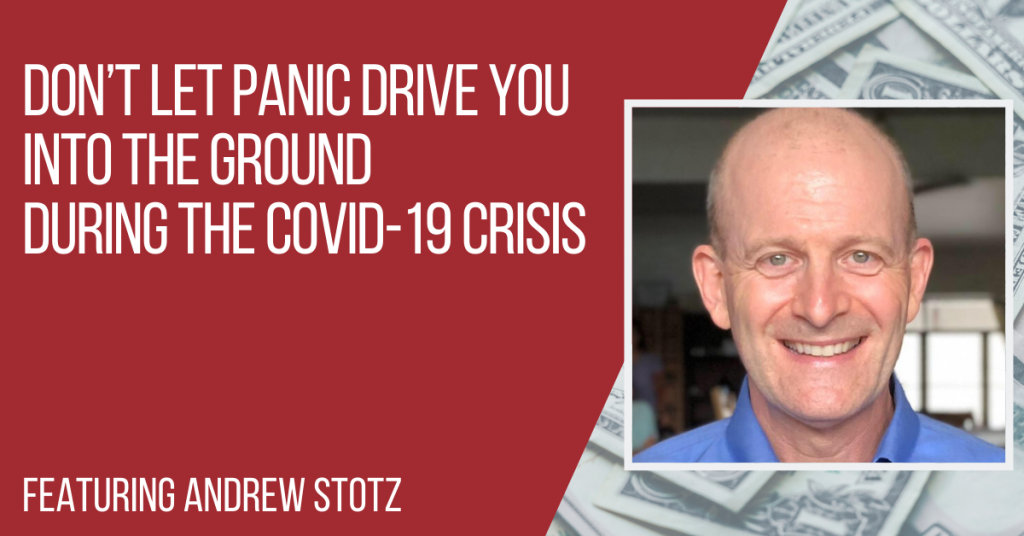 With the novel coronavirus spreading like bushfire all over the world, it is a terrifying time for both individuals and businesses. The future is indeed uncertain, and the anxiety is setting in.

Andrew Stotz has lived through many different personal and financial crises over the years. Today he shares his story of loss. It’s not his worst investment but his worst personal moment, and it came with lots of lessons that we can all borrow from to carry us through the current COVID-19 pandemic and the looming economic crisis.

“Stay calm, and look forward to a great future because things will turn around.”

The calm before the storm

It was around 1995, and I was riding high as a stock market analyst in Thailand. I had been promoted to be the head of research of W.I. Carr, which was the number one foreign broker in Thailand at the time. All was going well.

My best friend Dale came to visit and suggested we set up a coffee business in Thailand. Initially, we were going to buy coffee from other roasting companies, package it, and then sell it. However, we couldn’t find companies that would be able to produce the coffee to our standard, so we decided to build a coffee factory.

Well, no problem. I was making good money and had already saved a lot. Dale moved to Thailand, and we set up CoffeeWORKS. We started our sales in 1996.

Riding my first wave of a financial crisis

In 1997, the Asian financial crisis happened. I remember walking into work in July, and the news was that the Thai government could no longer defend its currency, the Thai Baht, and it was going to collapse.

The collapse soon started. The Baht at that time was 25 to the US dollar. By the end of 1997, it was at 60 Baht to the US dollar. Companies that had US dollar debt were in serious trouble because they didn’t have enough money to pay it back. The economy started to collapse, and everything got worse.

Our plans for our business soon disappeared. We had plans to sell coffee to many companies as the economy was expanding in Thailand before the financial crisis. But instead, our sales dried up to almost nothing. Every day, we saw no new customers come in, and existing customers disappeared. And of course, no income. Yet we still had a factory and people working in it. Gloom was setting in fast.

Riding my second wave of loss

As if the poor launch of our coffee business was not enough, in April of 1998, I lost my job working in an investment bank. All of a sudden, we had a business and a factory, and a lot of costs, but no revenue, and no employment for me to feed the cash needs of the company.

There was very little hope that I would get a job again in the financial industry because everything seemed to be decimated by the collapse that had now hit Thailand, Indonesia, Malaysia, and later on many other countries in Asia.

Time to scale down

Dale and I had lived together in a house in Bangkok. We decided to move out to cut down costs. So we moved into the coffee factory. We moved the sales team out of one of the rooms that had air conditioning, put two beds in it, and it became our new home. It was like going back to college days, two beds, one room, and a bathroom outside of that room.

The angel of doom visits again

One day in August of 1998, Dale and I had woken up to an empty factory. No workers, nothing going on, it was raining heavily outside, and it was just a depressing day. I got a call from my sister Kelly, and she said that her cancer had come back.

The doctor said she had only one month to live. She asked me to go home to see her. When I hung up the phone, Dale and I looked at each other and just cried. We were at the absolute bottom that August Sunday of 1998. A professional bottom and a personal bottom.

Within one week of arriving in America, my sister passed away. I got one week to spend with her. I stayed for a couple more weeks with her family, and then I had to come back to Thailand. I came back completely depressed and defeated.

Time to buckle up and deal with all the loss

Dale decided that living in the factory would eventually break us and so we moved into a tiny low-cost apartment nearby that cost $150 per month for the two of us.

I was so depressed to even think about our coffee business. Dale is an Iron Man, and he kept doing the next best thing that he could do to continue the business. Dale was a very honest and sincere man during these desperate times, and he continued slowly.

In 1999, I got a call for a job offer to work for a bank. The economy was starting to go up slowly. CoffeeWORKS began to recover as Dale continued making the next right steps. We made mistakes along the way, but today we’re a company with more than 100 staff in a robust business, and we’re celebrating 25 years in existence.

You can’t stop an economic crisis

When a financial crisis comes, there’s not a lot that you can do to change it. You’ve got to buckle down, keep your costs low, and come up with ways to cope with the situation because it isn’t going to turn around quickly.

Don’t cheat, lie, steal, or do other things that some people do in times of desperation. Everyone is suffering, don’t add to their suffering by being inhumane.

In times of crisis, small businesses are trapped. You can’t sell the company because no one wants to buy, and you are not making any sales to secure your future. All you have to do is to keep moving forward until the dust settles down.

When a crisis comes, take it easy. Don’t let panic and fear drive you into the ground. You will make it. It’s just going to happen slowly, step by step. Don’t cheat or defraud people. But if you can’t pay, just tell them, “I can’t pay right now.” And work it out together.

My number one goal for the next 12 months is to have 80% of my company’s revenue come from my online courses and other digital assets.