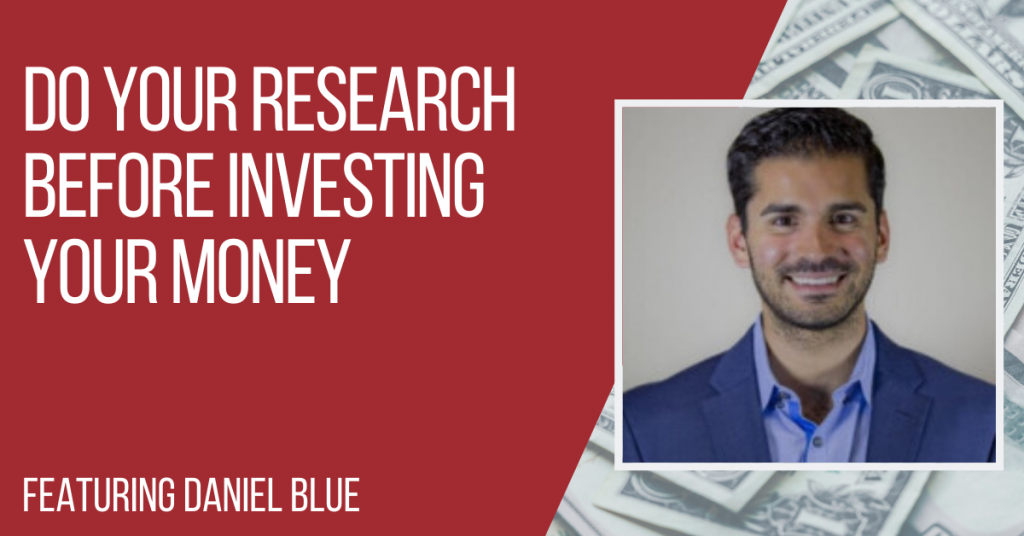 Daniel Blue is the owner of Quest Education in the US. He educates business owners on self-directed retirement accounts to help them accomplish their financial goals.

He teaches financial education to business owners to help them understand how to: save for the future, protect their assets, save money on taxes, get the funding they need, and eliminate debt.

Daniel has worked with over 1,200 business owners and is a contributor to Forbes magazine. He is driven by his passion for helping people shape their retirement dreams into reality.

“To invest money wisely, know your options, and use less emotions and more logic.”

Making it in life at just 18 years

Daniel got a sales job when he was 18, a job that he was quite good at. He was doing well right off the bat, making about $10,000 a month. He was ecstatic and on top of the world.

Time to become a homeowner

Daniel was feeling good about his success, and he figured it was time to live as the rich do. He was feeling invincible and knew that he deserved all the nice things in the world. First, he bought a Range Rover; next, he went shopping for a house.

He decided to get a mortgage. He was approved for a loan, put a down payment, and bought a house in Utah for $260,000. Life was perfect for this rich 19-year-old. What could go wrong?

While everything seemed perfect on the outside, on the inside, he was a wreck. He was a 19-year-old dad addicted to OxyContin. He was spending thousands of dollars every month to fuel his addiction. On top of that, he was still living a larger-than-life lifestyle spending more than he was making. Eventually, he had to get clean, which meant leaving Utah.

His investment mistakes come to haunt him

It was first when he had to sell the house after moving to Nevada that he realized the costly mistake he had made when buying his home.

Daniel had put zero thought into his home purchase. He did not do any research. He just went on to buy the first house that looked good to him.

When selling his home, he realized that he had bought a home in a bull market, and now the market had turned. Daniel ended up losing the house to a short sale losing all the money he had put into the house.

Had he done his research, he’d known to rent instead of buying and would have avoided making his worst investment mistake ever.

Understand your investment before you invest

Do your research before buying a house. Understand the interest, the current market, and future market projections. This kind of information will let you know whether your investment is viable or not.

Have an exit strategy

When investing your money in a house, think about how long you intend to stay in your new home and how moving in the future will affect your selling price.

Forget the keeping up with the Joneses idea

Keeping up with the Joneses is a fallacy that needs to be thrown out the window and instead create sustainable success. Create your own success; that’s based upon what works for you. Don’t be driven by what society defines as success, because, if you get caught up in that, you’ll be chasing a dream that leads you to emptiness or disaster.

Don’t compare other people’s outsides to your inside

Everybody is messed up, even the people that appear to have it all together. So when thinking about how to invest your money, don’t fall for what you see when you look at other people; focus on what you have.

Try to overcome your addiction

If you have an addiction, and you don’t overcome it, your problems will only get worse.

Do more research and know your options before you buy a house. Don’t buy without putting thought into it.

Daniel’s goal for the next 12 months is to get his book out there. The book is about the power of self-directed retirement accounts and how people could get more creative and access money in their IRAs and 401 K’s without paying penalties and taxes.

“If more people could be truthful and talk about failures, I think people would realize that they’re not alone, and there are lessons that we can extract from those different failures.”