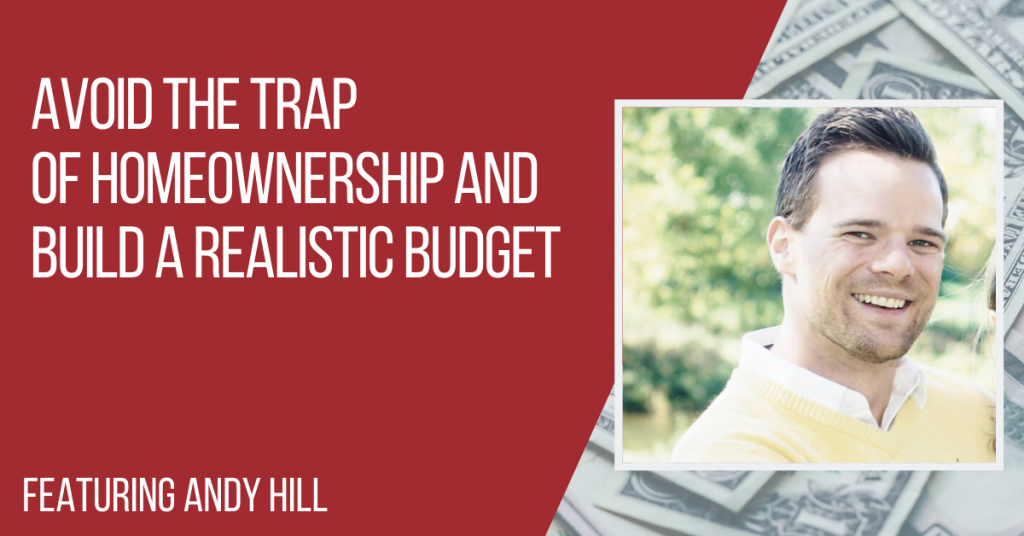 Andy Hill is the award-winning blogger and podcaster behind Marriage, Kids and Money Podcast. His podcast and blog are dedicated to helping young families build wealth and thrive. His advice and personal finance experience have been featured in major media outlets like Business Insider, Market Watch, and NBC News.

Trusted as a personal finance influencer by National Financial brands like Quicken Loans, his message of family financial empowerment has resonated with listeners, readers, and viewers across the US.

When he’s not talking money, he enjoys wrestling with his two kids and singing karaoke with his wife.

“I made a promise after that home purchase that I would never buy a home that took up more than 25% of my after-tax income.”

Excited to be a young homeowner

When he was 22, Andy decided to invest in his first investment, buying his first house. He had saved $20,000 working odd jobs and couldn’t be more proud of himself. All along, he had heard that the best thing one could do with money is to buy a home and become a homeowner. So this was a big deal for him because he had worked hard and felt proud of that.

Andy ended up looking in a great suburb where a lot of young people lived after they graduated college and found a $200,000 house. He put 10% down and bought the home. He was

excited; it was going to be his bachelor pad close to downtown where he could hang out with friends.

The bills start trickling in

Once he got the keys, he started to get the bills. He quickly realized that this mortgage was going to take up about 70% of his income.

As if the mortgage was not enough, things started breaking. The roof needed replacing, and the kitchen needed some work. Andy didn’t have the income or the funds to properly fund this investment that he had plunged all his savings into. He ended up taking out a home equity line of credit (HELOC) on his home to keep up with his living expenses.

Shacking up to pay up

The bills started to rack up, and he got into debt. This was not the investment that he thought it was going to be. So he ended up getting some roommates to help him pay for his living expenses. Some of them worked out; some of them didn’t.

Getting out of his worst investment ever

To get out of that mess, he worked harder to grow his income to pay his mortgage. Eventually, he just had to sell the house. At this point, he had done some updates to the kitchen and the backyard. And all in all, when he sold the house, he barely broke even. He sold it for $225,000.  But he had spent more than $25,000 in repairs.

Don’t buy more house than you can afford

While it was commendable that he could get a loan at 22 years of age, at the time, he was making $28,000 a year, meaning that he would have to cough up almost all of his income to pay the loan.

Keep your mortgage payments below 25% of your income

Andy made a promise that he would never buy a home that took up more than 25% of his after-tax income.

Buying a house can be a trap, so be prepared to be trapped for the next five years if you’re lucky, or 10 if you’re not so lucky. And if you’re very unlucky, you might lose it all.

Widen the gap between your income and your expenses

Homeownership, unless you do your research very well and get the right place, is not the best investment out there. Don’t take homeownership advice from just anyone. Do thorough research before you take the first steps to homeownership.

Before you jump into homeownership, plan out a budget beforehand that showcases your entire living costs or your potential living costs. Calculate how much your mortgage is going to take up from your income.

Also, look at things that are not normally factored in, such as furnishing. Plan for repair costs. Make sure you also factor in an emergency fund. So you’re not relying on credit cards or a home equity line of credit to cover you. Think about those things before you make what could be the largest purchase of your life.

“Before making any big investment, do a lot of research first, plan it out and make sure it’s a good fit for you in your specific situation.”