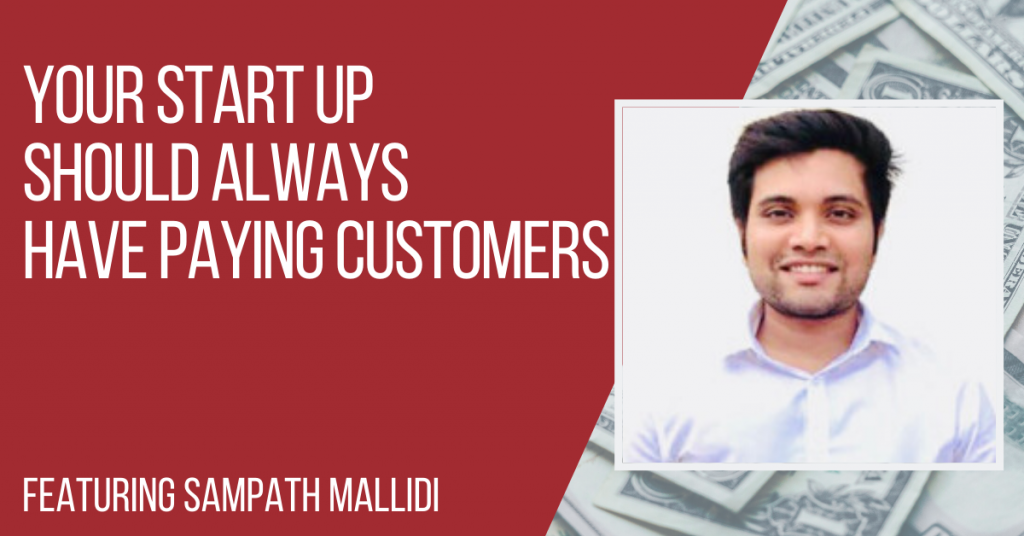 Sampath Mallidi is the Founder and CEO of Intandemly, a successful startup that helps organizations execute Account-based Sales through their software. Bootstrapped and formed in 2017, Intandemly has been profitable since year 1. Today, more than 200 organizations from 10+ countries use Intandemly to generate sales in the five figures!

Sampath is an MBA from Indiana University of Pennsylvania with an obsession for entrepreneurship, sales, and salsa.

“Cash is not the king. Cash flow is the king, so always have paying customers.”

Before starting, Intandemly, Sampath worked two jobs, both in sales. But it was in the second job that he got his aha moment. Having been in B2B sales for all this time, he felt there was a need for an affordable account-based sales software for Small and Medium-sized Businesses. And if he could help them execute high quality targeted outreach to customers, he would be making an impact.

So together with his then-boss, they formed Intandemly. They felt great about the new startup company, but they had no money.

Sampath went out knocking on doors, speaking to lots of potential prospects pitching his new platform and showing them how his platform would give them a higher ROI. He met about 20 companies and three of these loved his idea.

Wearing his heart on his sleeve

Sampath went out on a limb and told the three companies interested in his software that he had no money to develop the software for them. He asked them to pay him upfront.

He used the money as his starting capital and put together a team of developers that started working on his idea. Soon enough, he delivered the software to the three customers who had put their faith in him.

From there on, he continued meeting as many customers as possible. That’s how he was able to fund the company and in exactly a year and a half after starting the startup, they were at a pretty comfortable stage with roughly 50 to 70 customers.

The startup becomes a household name

One gentleman that comes from a pretty big background took notice of the company and wanted to take a little stake in the company. And he was ready to invest immediately. So the deal was that he would be pumping in money two months after giving him the go-ahead.

With the anticipation of getting good funding from the gentleman, the company changed its entire strategy and started thinking very big. They had all these huge strategies that they were going to implement with the money. They spent all the money they had in the bank because they knew a lot of funds were coming. They even had a grand party with all the employees.

The deal that never was

One day as Sampath was coming back from the temple, he got a message from the gentleman saying that he was ill and would not invest in the company. Sampath went numb. He was in total shock and didn’t know how to react for a day. It took him a day before he could try connecting back with the gentleman.

However, after a lot of thought, he decided that he would not try to convince the investor to give him money. Instead, he decided to go out and look for customers just as he had done in the past, something that had brought him huge success. So he wore his shoes, got into his car, and started meeting as many people as possible.

This was Sampath’s worst phase and the worst investment in terms of time. For the three months, he was in talks with the ‘investor’ he had stopped looking out for customers. Instead, he was more focused on restructuring the organization and lost his original focus. Now he had to start all over again.

The deal is never done until the money hits the bank

Whether it’s winning the customer or getting an investment, the deal is never done until the money hits the bank.

The more you take time to let the suffering and the depression sink in you, the more you’re letting yourself suffer. The faster you bounce back, the better it gets for you.

Start figuring out how to move on because shit happens.

Cash from someone dries very fast, but cash flow from your sales are recurring.

You need sales not investments

The majority of startup crises can easily be solved with sales, not with investment.

It’s lonely at the top

As a founder and a visionary, you need to keep a positive mindset and keep motivating the whole team to go in the right direction, no matter what ups and downs come your way. And that’s just hard to do. There’s a small number of people that you can talk to, and it’s probably not the people that are in your company.

Have enough cash to fund your runway

Have enough cash to take off but also cultivate confidence in your employees because if they lose confidence, it’s over no matter how much money you have in the bank.

Sales, unlike cash in the bank, give you recurring revenue.

Whether you’re building a product or a services company, make sure that you always have paying customers. Don’t quickly buy into the valuation game projections. All those are great. But the reality is, how many paying customers do you have? The more you have, the more you grow in confidence and eventually, you also grow in valuation.

Sampath’s goal for the next 12 months is to enhance his product to a world-class level.

“When you’re building your business, first, you need to love what you do. Second, find a way to blend creativity and the commercial aspect of your business.”