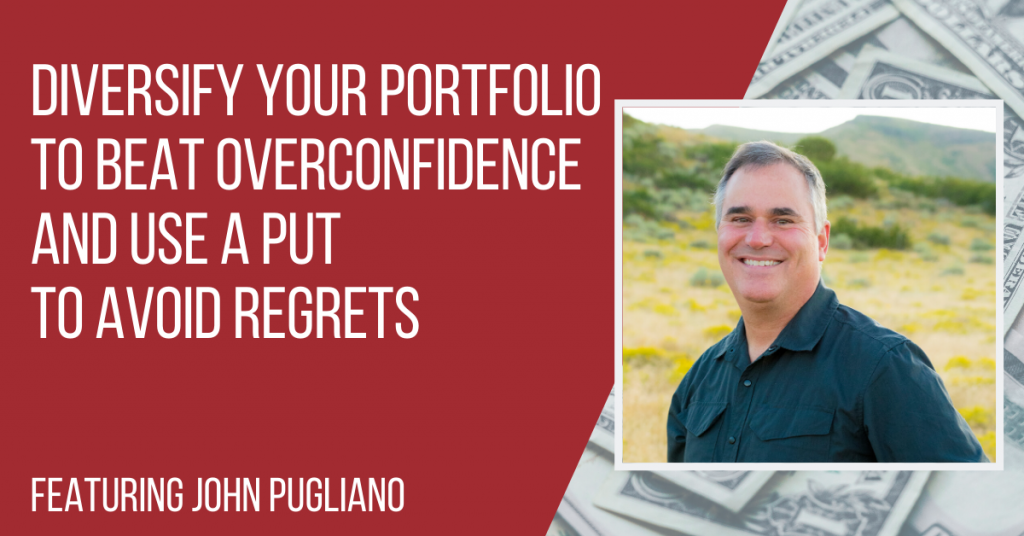 John Pugliano is the author of The Robots are Coming: A Human’s Survival Guide to Profiting in the Age of Automation. He is the host of Wealthsteading Podcast as well as the founder and money manager at Investable Wealth LLC.

John’s circuitous career path includes military services, both enlisted and officer, corporate career in industrial sales, and finally, a late-blooming entrepreneur. John has an MS in Systems Management from the University of Southern California and a Bachelor’s of Science and Environmental Science and Engineering from Penn State. In a nutshell, John is the quintessential Millionaire Next Door.

“First, learn how to earn, then you have to save, and then and only then you invest.”

The arrogant and overconfident investor

Having escaped the internet bubble unscathed, John became arrogant and overconfident. With so much confidence, he invested a very large percentage of his portfolio in a brick and mortar, retail type of service company.

He invested in Boston Market, a concept restaurant that served good healthy, home-cooked kind of meals. But the big concept of it was you didn’t have to eat there. You could take it at home. Take out was a new thing, and this made the company all the rage.

His entrepreneurial instinct told him that the technology stocks would go down, but the brick and mortar type of restaurants would always be there. And besides, the company had great reviews. Everybody loved it.

So feeling all smug and overconfident, he put a large portion of his portfolio that he’d already made a profit on from getting out of the internet bubble into Boston Market.

Falling off the high horse

The Boston Market stock listed at about $20 and was selling at around $45 when John decided to invest in the company.

Within a short 18 months, the stock went to zero, and the company went bankrupt. So John didn’t lose 10% or 20% or even 50%, he lost a whopping 100% of a large portion of his overall investing portfolio.

John was overconfident in his investment plan so much so that he didn’t even consider diversified investments. He put all the money he had in one stock.

John learned the hard way that you don’t have to believe in the rich man’s hype. You don’t have to take big risks to win. The way to win is through portfolio diversification. So instead of investing in one stock, diversify your portfolio by investing in many different stocks. This cushions you from making your worst investment should one of your stocks go bankrupt.

John’s style now is to have very large diversification. He prefers to have a minimum of 30 stocks at a time, which gives him roughly a 3% position in any one stock. Now even if another disaster happened and one stock went to zero, he’ll only have lost 3% of his overall portfolio.

He now believes that if you can’t have a diversified portfolio, you’re not an investor, and you shouldn’t be doing it.

Ignoring the hype is especially an important lesson for people who are interested in how to start investing in stocks. Forget the people on Wall Street; they’re simply interested in getting your money, so don’t take them at face value.

Being cynical when getting into the stock market will save you from losing your wealth. Ask the hard questions before you get sold.

Don’t be a conformist

Don’t fall for fear of missing out, aka FOMO. Just because everybody else is investing in a particular stock, you don’t have to do it. Whenever you conform you risk getting mediocre performance.

Protect yourself with a put

If you want to buy into one stock, you can protect your wealth with a protective put option. A put option allows you to know upfront what your losses stand to be. So you know how much you’re willing to risk.

Be careful not to be overconfident

Confidence or overconfidence is the problem, while diversification is the solution. Overconfidence will bring you losses, but learning how to diversify your stock portfolio will increase your wealth.

The number one investment mistake that people make is that they fail to do their research. We fail to properly assess and manage risk leading to poor investments.

John’s number one goal is to get out of the unpredictable stock market before it falls apart. He doesn’t want to be the last guy standing. He wants to get out before the music stops.

“The best way to build your wealth is to do what works for you and not what others are doing. Do what you know.”