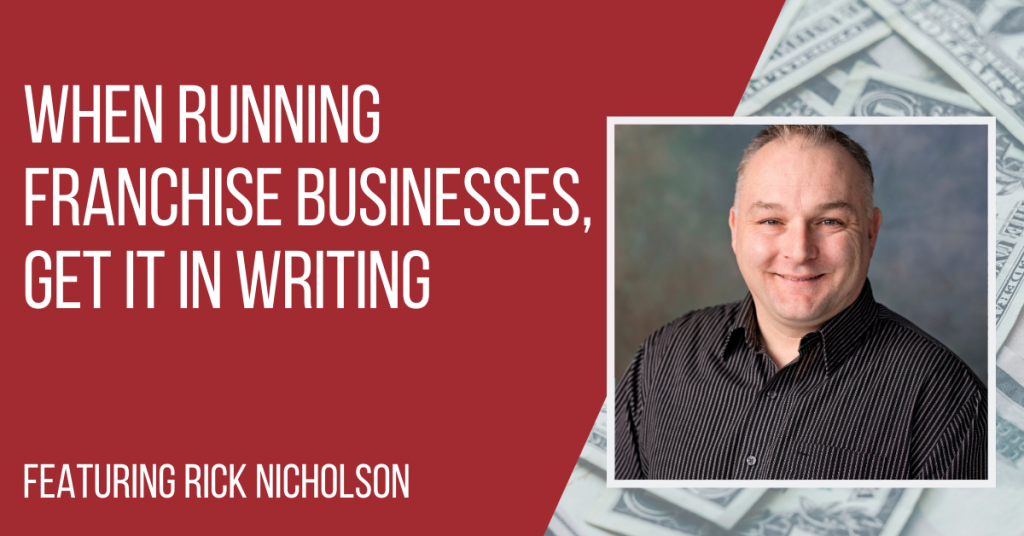 Some would say, Rick Nicholson, owner of several franchise businesses is a serial entrepreneur because of the seven restaurants he has owned over the past 13 years. He would say he’s just a guy trying to do the stuff he loves to do while trying to make enough money to survive. He hates the term “serial entrepreneur”.

He has a strange combination of skills that include a solid understanding of account and marketing, which helps him identify potential business opportunities. He owns three restaurants, a consulting business and is a partner with Wizard of Ads in Austin, Texas. In his spare time, he coaches his son’s AAA baseball team, sits on multiple boards and wonders where the world will take him next.

“Just because you say something doesn’t mean it’s going to happen. You need a legal document for everything.”

Rick started as an executive in a franchise business. He continuously got excited about hanging out with franchisees and decided that it was time for him to get into the business. He tried teaching entrepreneurs but he still had the itch to be an entrepreneur.

An entrepreneur is born

He quit teaching and decided to explore available franchise opportunities. He decided to open a franchise restaurant and in no time he was able to finance half a million dollars for his first restaurant. About two or three years later he bought his second franchise in the same group.

With two franchise businesses to run, his wife joined him and they ran the two restaurants turning them into the fastest growing franchise operations in the network. The businesses were growing at 43% annually, where the average was about 3%.

Scratching the itch to have his franchise businesses

While being part of the franchise group was working well for him, the entrepreneur in him wasn’t satisfied. He wanted his own business and create franchise opportunities from it. He always had this dream of owning a coffee shop that he could franchise. With the experience he had earned running the two franchise restaurants, he decided to live his dream. But he was bound by a franchise agreement that contained a non-compete clause.

A man’s word is not always his bond

Not wanting to violate the non-compete clause, he called the VP of operations and told him about his plan to start a coffee shop. He talked to him about the franchise agreement and whether he’d be violating it by opening the coffee shop. The VP told him not to worry about it and gave him his word that it wouldn’t be a problem.

As fate would have it, just when he was ready to open his doors to his first customers, the VP was fired. At this point, he’d already invested $50,000 into the coffee shop. When the new VP came in, Rick called him just to make sure that he was still in the clear to run his coffee shop alongside the restaurants.

The new VP sent him a few questions via email to which Rick provided the answers. The VP assured him that there would be no problem, so he went ahead and realized his dream.

Word of mouth – no chance against written contracts

Six months later, he got a lawyer’s letter in the mail saying that he had violated his franchise agreement.

Now you see, Rick is a rural guy from a town where if a man says something that’s taken as a bond and there’s no need to get legal documents drawn up. So he was in total shock when he realized that the VP had gone back on his word. He thought it was probably just a misunderstanding.

However, the VP was categorical that Rick had violated the agreement as he didn’t get the board’s approval, a requirement of which Rick was unaware. He certainly should have had legal documents drawn up after the discussion with the two vice presidents.

His dream comes to a bitter end

Rick’s lawyer was ready to put up a fight against the franchise group but the entrepreneur figured that it would be a waste of energy. So he decided not to fight them. Instead, he negotiated for some time before he could close the coffee shop.

The coffee shop wasn’t the only dream that had to come to an end. Rick felt betrayed and disrespected by the franchise group and he just couldn’t continue doing business with them. He simply couldn’t trust people who couldn’t keep their word.

At this point, he was so exhausted and he just wasn’t feeling a creative outlet working in this franchise environment. He decided to sell his two franchises. The decision to sell both franchise businesses cost him about $250,000. It was a painful loss and definitely his worst investment.

Get those papers signed

Rick learned the hard way that just because someone says something it doesn’t mean it’s going to happen. When drafting franchise agreements always make sure that the agreements are executed with legal documents. Legal documents leave no room for ambiguity or misinterpretation. Go ahead and spend that $1,000 and get some legal advice because it might just save you from losing a whole lot more.

Know when to walk away

Not every problem has to be escalated into a big problem. Sometimes it’s better to walk away from a fight because it’s just not worth the time and energy, especially if it’s going to cost you a lot more.

Agreements are not set in stone. Just because it’s in writing, doesn’t mean that it can’t be changed. Always try to negotiate. It doesn’t hurt to ask for what you want.

Not everything has to go into a confrontation

A confrontation is not always the best solution in the business environment. Try to talk about it and if this does not work out then walk away.

Make sure that anything that is of consequence is contained in a legal document and everyone has a clear and mutual understanding of what is written there. It may not always protect you, but it’s at least one barrier to prevent further mishaps.

Rick has three successful brick-and-mortar businesses and a couple of consulting businesses. Next, he wants to try online businesses to allow him to travel more and probably live a digital nomad life enjoying different cultures.

“Before you spend any money, get some legal advice and draft up a piece of paper.”