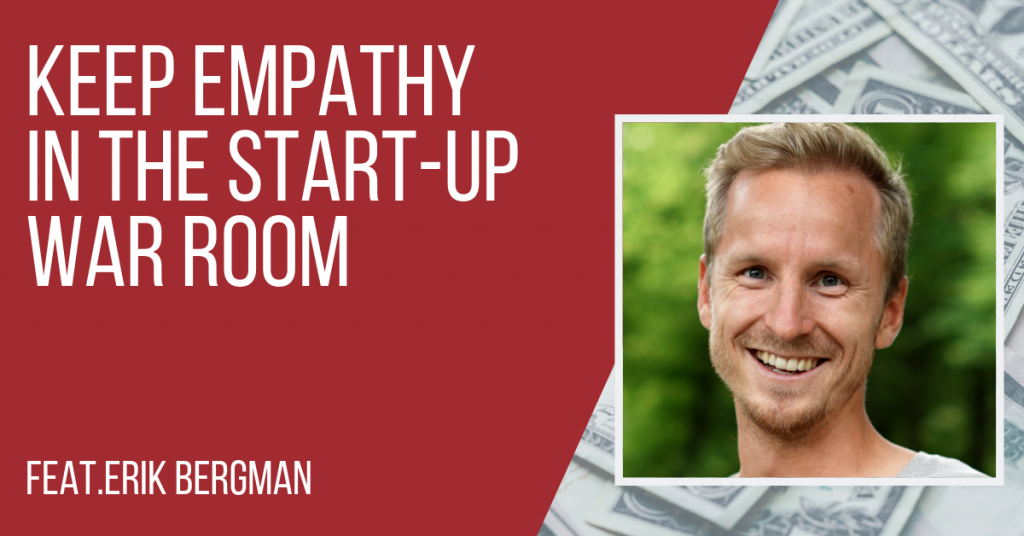 Erik Bergman started his career as a professional poker player while he was still a teenager. At the same time, he founded his first companies. In 2012, at age 24, he started Catena Media, a company that only three and a half years later would be listed on the Stockholm Stock Exchange with a US$200-million valuation. He left Catena Media a few years ago and today is just starting his latest project, Great.com, a company for which the name alone cost $900,000. But this time around, he wants to do everything differently, which means giving away 100% of the profits to charity.

“We invested so much emotions and so much pride and ego into not failing, and into something that should have failed long time beforehand.”

Cash losses were never as bad as this

In 2012-2013, he was busy starting several different companies at the same time, including that of a venture capital firm. One company was working with payday loans. His team were running a marketing company that had a lot of payday-loan clients. So they decided that if they could do the marketing, they could do it all. Of course it turned out much harder than they had ever anticipated it would be, and that was the first mistake they made: thinking it would be easy to jump into a business area about which they had no understanding and with far too little research.

So they started building the company and hiring people to run it. However, very early they realized that it was much harder than they had expected. Nevertheless, they soldiered on, and Erik hired one of his closest friends and a few others to help run the company. But the venture just never found any traction. They had many technical issues and struggles. Erik’s old friend was in charge of the technical side, which kept facing major challenges due to the size and complexity of the big system they had built. By the time the system was up and running, they ran into troubles with the bank, which didn’t want to co-operate because they were competing with them. Thus, they couldn’t finance the operations and they needed to find other ways to fund it. Whenever they managed to solve one snag, they would be hit by the next one. It took a year before the venture became somewhat sustainable.

Having already lost a lot in time and having spent a lot of money, there was then a change in the legal requirements that forced Erik and his team to change all of their back-up systems and they had major problems getting access to more data. So they had to change the entire back-end. Erik’s friend and business partner was already overworked and he and two others were in charge of running the operation. Right in the middle of the regulatory changes, the two others resigned. One, his friend’s girlfriend, got pregnant and the other just wanted to leave Malta and move home.

So Erik’s friend had to do this three-person job. He had to rebuild everything and worked day and night for weeks. Erik was unable to help because of his lack of tech expertise. The friend put one system together but it had been put together hastily. Because his friend lacked the time and energy to do it optimally, the system crashed within around two weeks from being made operational.

So Erik and his friend had struggled for so long and just when they could see the light at the end of the tunnel, the legal requirements changed, his friend had to build the entire system alone, and then it failed. Erik’s friend had a complete breakdown out of physical and mental exhaustion. Busy with other projects, Erik was unaware of his friend’s condition or the pressure he was under. His friend, who had not slept for weeks, didn’t come back to work. Erik admits being too distracted looking at the numbers instead of being there for his oldest friend, who would take three years to fully recover.

Financially, this was a small side business compared to the bigger companies he and his team had put together. But they had invested so much emotion, pride and ego into it not failing and into something that should have been allowed to fail a long time beforehand. They just kept focusing on it, and it cost them a lot more than money. They never got it up and running and had to sell the remainder of the database and other assets at significant losses. It also took Erik a long time to recover from such strong emotions as well, because he felt that his friend would not have cared so much about the project if Erik had not pushed himself and his friend so hard.

Not a big money loss, but big losses in every other way

This was one of the darkest chapters in Erik’s business career and life, during which he admits being “way-to-narrow minded to deal with it”. So the financial loss was insignificant, he said. But he has learned from it, and has never since done something that could put someone else’s health at risk, and especially has not endangered the well-being of close friends.

“So a lot of his physical health and his emotional health was at stake because of my stupid ego, pride, and greed … I still feel a lot guilt and shame over this, but I have found a good way of dealing with it.”

Erik hastens to add that he’s talking about the company, not your friends, when talking about what to do when reaching a crossroad decision of whether to forge on or walk away from a start-up company or an investment. When things go wrong, step away and think: “Would I really think this was a good idea now as a totally new investment?”

Relationships are so much more important than money

Think about the other people involved and put yourself in their shoes, especially if you are pushing people into something. Ask yourself: “How is this experience through their eyes?” Be better at assessing what is happening to all the people involved.

“I don’t regret the loss in terms of money, but I really regret how I dealt with my friend.”

It is fun to talk about the numbers, growth, opportunities and the “agile, lean” exciting things when investing in a start-up, but people’s livelihoods, futures, families, health and state of mind are all effected by the decisions we make, or refuse to make.

The solution is being open, and it is difficult. When you’re in in the middle of a situation, it is not easy to go into your company and say: “You guys want to give up? Should we stop?” But it must be done, even if you individually have to step back and, without necessarily sharing it with the others, look at what you’re doing. Empathy is needed and that is something Erik also has surely taken away from this story.

Ask yourself at crunch times: “Knowing what I know now about this situation (whether it’s an investment, a start-up, or even a relationship), would I enter it now if I wasn’t in it already?” And if the answer is no, some serious thinking and researching needs to be done immediately.

If anyone listening to (or reading) this has a business idea, whatever it might be, start it. If it doesn’t work out, it’s much easier to quit once you’ve started than it is to deal with the idea of never starting, or going on with an idea to the bitter end until you lose everything.

Erik has the domain name, Great.com, for which he is building a lifelong company intention, and that is for 100% of its profits to go to charity. His number one goal for that enterprise is to find someone to help build the project with his team, someone who can be CEO, CTO or whatever title they want, as long as they really resonate with the ideas that he and his team have. He needs someone who is technical, emotionally intelligent, and has long-term strategic vision. Anyone listening can go to his podcast, Becoming Great.