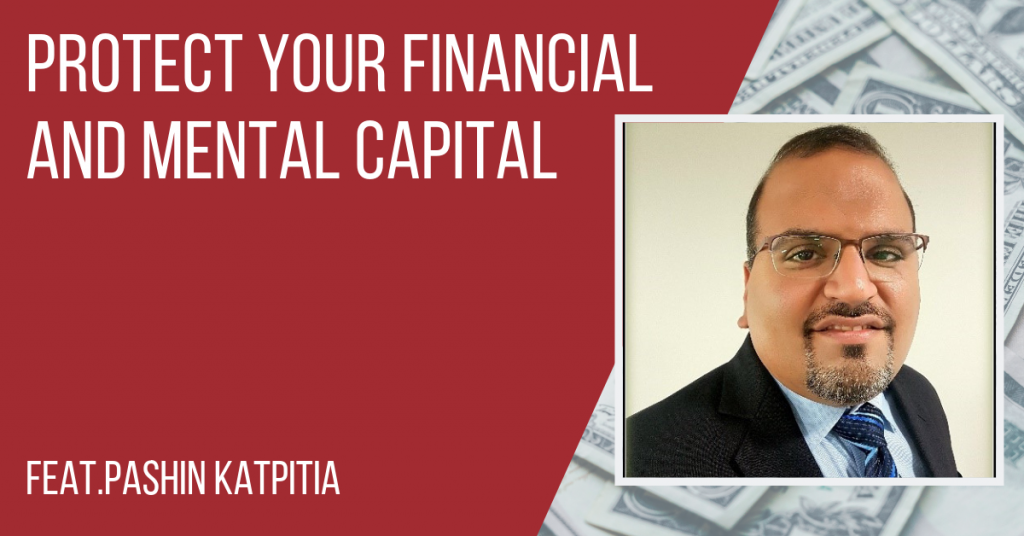 Pashin Katpitia is the chief technical officer and a director at Inspiron investment consultants based in Mumbai, India. A third generation entrepreneur, stock trader and technocrat, Pashin is a highly disciplined trader who focusses on market realities at all time. He is committed to the growth of the investor and trading community and has trained thousands of novices and experts. Pashin has developed real-time trading systems and is a point of reference for many traders seeking support. He and the founders of Inspiron have recently deployed a fully-algorithm-driven rating and curation app for stocks and commodities that provides innovative features, such as a triple-layer market outlook for the short, medium and long term, as well as a star rating for each stock listed on exchanges. The app, Shazpha (which means success), is available on App Store and Google Play, and currently offers coverage on all exchanges in India, as well as the NYSE and Nasdaq bourses in the United States.

As Pashin is an engineer by training, and as Andrew has met a lot of engineers who are thinking about entering the world of finance, Andrew asked him as a prelude to his story what his one piece of advice would be for the young engineering student or engineer interested in joining the investment industry.

Pashin’s experience is that engineers, doctors, housewives and students from any field are actually better stock traders and investors than professionals because they come into the field without “a lot of baggage”. On the other hand, professionals do carry a lot of mental baggage.

Pashin’s story starts when he first got involved in fund management in 2010. He had inherited a fund from a previous fund manager who hadn’t performed well and it was down 40%, so he was left with 60% of the initial capital to work with. It was difficult, but because he had a system, he just followed that and remained unaffected by personal feelings.

Following a system, he regains losses and makes a profit

It was a decent-sized fund, small by global standards, but it still held US$1 million, which he invested in a total of four stocks. That portfolio helped him recover the losses and generate profit in the first year, so he and his investors were back to square one. The clients though had regained confidence in Pashin and it was a great feeling for him to have recovered clients’ losses and also made them some money.

Now in 2011, the year started off well, and Pashin moved in and out of several investments. On the whole, however, he was riding on just three stocks for about eight months. By December, he and his team decided that since they had generated a good profit (about 40%), they would take those funds and spread them among the investors, who were on a high because just the previous year they had recorded losses. Now in this year, they were looking at a 40% profit. So most of the investors said: “Let’s re-invest the money and just keep trading.” So they were all confident and began 2012 with a program of re-investing their profits.

So they all started off in January 2012 with the clients having re-invested their profits, and with a larger fund amounting to capital of around US$1.4 million. With that, they started larger positions in the same stocks because they had found that those stocks were still the best. Then the markets started to shift unpredictably, and by the end of March 2012, they had lost all the profits that were made in the previous year. That moment was a real wake-up call for Pashin that the markets can go wrong. It was only thanks to his system, which included stop-loss points, that he was left with the capital intact, and he had only lost the profits that were generated in the earlier years.

Realization that as markets can rise, they can also fall, without warning

He realized that markets can move in the absolute opposite direction to what you are expecting. And because he had increased his positions, his losses were magnified. While re-investing returns is a good thing, he said, it can also be counterproductive, especially if you have not managed risk well. So he had his team continue to trade in 2012, which was a really volatile year, and ended up losing another 18% on the capital. By the end of 2012, they were left with a little less than the level of capital they had held at the beginning of the year. That said, the clients had not lost all confidence and they allowed Pashin and his team to go on trading. Later on, that paid off as all losses were covered in 2014, followed by some impressive returns from then on.

Despite recovering losses, fund boss starts to question self and system

He said the point of the story was that the losses here brought him to a place at which he wondered if his system was effective, questioning himself. And that, he said, is the question most people face when they encounter this kind of scenario.

Stay in the market. Pashin says the number one behavior that pulled him through was that he kept invested, calculated the risk, and managed that risk well.

When intending to re–invest your profits, take a different direction. If you’re making plays on stocks, perhaps invest rather in commodities, such as metals or crude or another sector. Or if you want to invest in stocks, buy some other stocks and don’t invest in the same package again.

We are human. Sometimes investing can really take a toll on our various forms of energy. Pashin referred to “mental capital”; Andrew talked about “emotional capital”, and goes on to say that our energy stores, especially in times of crisis, can be depleted because of the situation. Maybe it is confidence, or maybe it is the thinking power, or the ability to step back and see the situation we’re in clearly. These times can have a real impact on us, physically and mentally.

Diversification has its benefits and its limits. Andrew here talks about the trade-off between risk and return. Owning many stocks, and therefore being extensively diversified, will certainly reduce risk, but it will also reduce the probability of outperformance. If you get to 20 or 30 stocks in your portfolio, chances are the performance of a portfolio is going to be the same as an ETF.

Use investment method that fits you and your thinking processes. Pashin is an engineer, so having a structured way of trading certainly fits and makes sense to him.

Since Pashin has been developing a new system of trading, he has been trying to get someone else to manage his portfolio in the same manner as he would. He has found this a major challenge because most people find it difficult to trade in a mechanical way whereby emotions are completely removed from the equation. So his true goal for the next 12 months is to be completely emotionless, continue trading, assign capital, turn his system on and take stock of the results after a year or so.

“You have to be invested in the stock market, and since you have to, you had better do it wisely.”