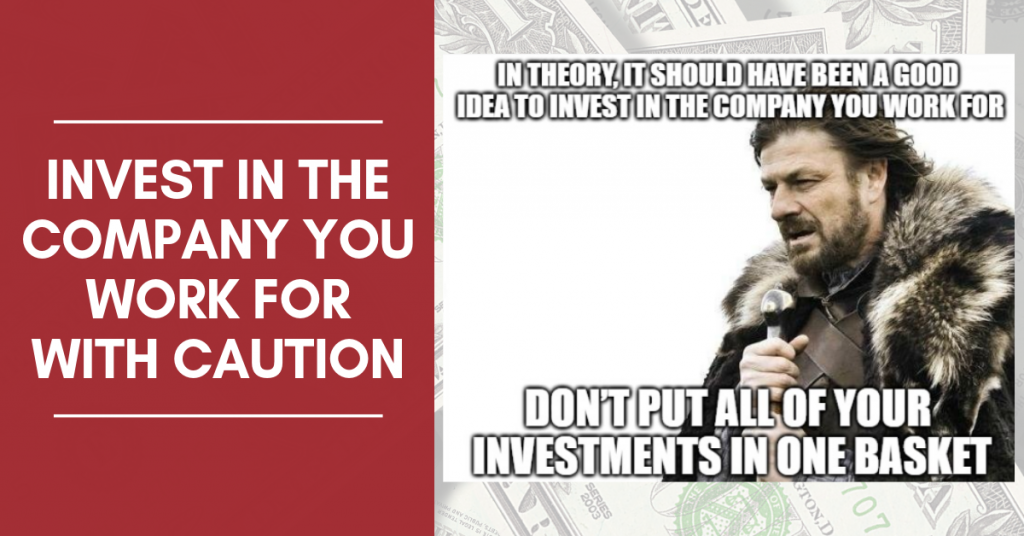 When I was younger and not so financially “sophisticated”, I used to work for one of the largest international general contractors in the world.

In theory, it should have been a good idea to invest in the company I worked for

Note: In the United States, a 401(k) plan is the tax-qualified, defined-contribution pension account. Under the plan, retirement savings contributions are provided, and sometimes matched, by an employer, and deducted from the employee’s paycheck before taxation.

Giant company operated across generations ends up in bankruptcy court

Tragically, even though my company had been around for generations, it eventually went bankrupt and my shares in the company became almost worthless. And by almost worthless, I mean, I eventually received a check stemming from the court proceedings about six years later for about US$2.75.

Don’t put all of your investments in one basket

Investing your retirement money into the same company where you work is a terrible idea so a dividend reinvestment program offered by your own company may sound nice on paper, but you are only making others rich and are not properly diversifying your personal risk.

Invest in the company you work for with caution

Many companies offer employees stock-ownership opportunities. If you can buy the company’s shares at a discount to the market price or if the company matches your investment, it could be very valuable. If that’s the case, it could be in your best interest to put as much money as possible into it. Just don’t stay invested in that stock forever.

Many stock-ownership plans require you to own the shares over a long period. In such cases, you are locked in. So, if you put your maximum amount into the program and you’re locked in for a long time, you will be very exposed to this one company. Of course, we all like to think we know that this company will survive and thrive, but in reality, nobody knows. Your best solution is to maximize the contribution that makes you the most money but to try to exit portions of that position as soon as you reach the time that you are allowed to sell. In this way you capture part of the benefit that the company is giving you, but you don’t get yourself overexposed to that one stock.

1. Failed to do their own research

5. Failed to monitor their investment

Posted in 1. Failed to do their own research, 2. Failed to properly assess and manage risk, 5. Failed to monitor their investment, Assumed past performance would continue, Failed to diversify, Failed to review investment strategy regularly, Invested in the company they worked for, Relied on the assumptions of others
← ‘Try Before You Buy’, If at All PossibleSilent Restaurant Partner Finds His Voice Too Late After Too Much Golf →