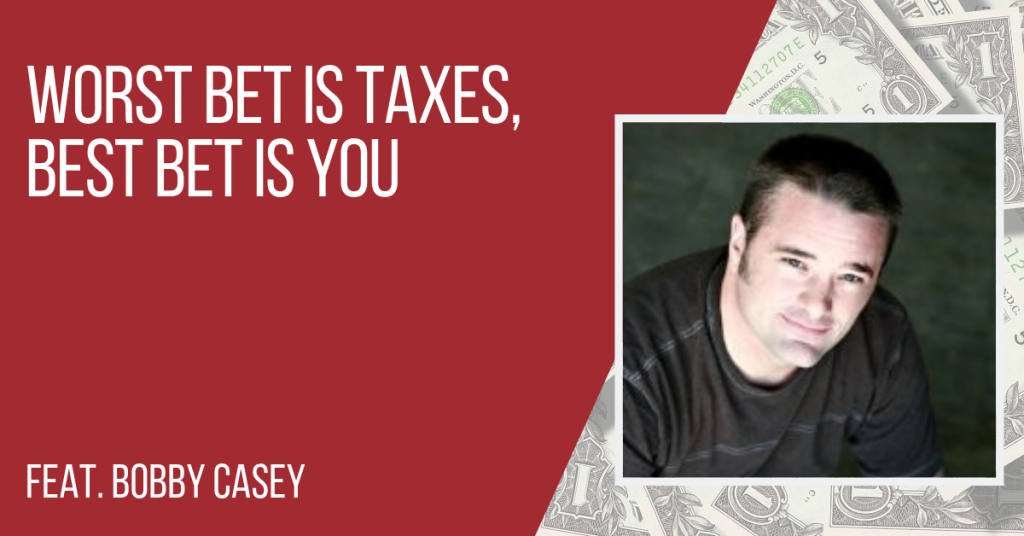 Bobby Casey is managing partner of Global Wealth Protection. His company helps clients from around the world to internationalize their assets and take advantage of unique investment opportunities globally. Bobby is a lifelong entrepreneur, investor and student of life. He is a believer in privacy and freedom and fights this fight via words and actions globally. As a renowned speaker on anarcho-capitalism, free-market economics, and offshore business, Bobby travels the globe working with like-minded clients to help them properly structure their businesses and their lives to minimize risk and maximize reward. He holds two bachelor of science degrees: one in finance, with a minor in economics; the other in international business, with a minor in Russian. He also holds a master’s degree in entrepreneurship from MIT.

“In reality, the worst investment ever related to taxes is not taking the time to properly plan and minimize your tax obligation.”

Not putting effort into minimizing taxes is an error of omission

He says his No. 1 worst investment ever was probably the same as it is for every person listening to the podcast – taxes. In a way, he is joking. But what he is really saying is that people don’t think about taxes as being a bad investment, because most people think they’re doing something they must do. However, the first time they write a six-figure check for taxes, it should make them think about what other better actions could be done with that money than pay those taxes. He doesn’t mean breaking the law. But he says, while abiding by the law, there are a lot of things people can do to minimize taxes. Many people don’t think about it and write it off as the cost of success, but Bobby points out they could have reinvested that US$40,000 or $80,000 into something significantly better if they had taken the available and necessary steps.

For several years, Bobby used to host around two offshore investment conferences a year, primarily in the Caribbean. Around that time, he developed connections in the private investment sector with people who had opportunities they were promoting and the events gave people a chance to learn about alternative investment solutions other than just building a stock and bond portfolio. Bobby become close with one apparently hard-working guy, “Rick” (not his real name), who was offering such private investment options on the conference circuit, giving presentations, and raising money for his private company. At the time, he was selling preferred shares in his company, and Bobby bought about $100,000 worth of private preferred shares, for him a substantial sum at the time.

Rick was doing press releases that told of his success in bringing in lucrative investors, sometimes $5 million clients, sometimes $10 million, and saying what returns were going to be achieved. One release said: “We’re going to be up 300% this year.” Bobby was impressed.

Adding considerable credibility to the investment was that Rick gained approval to take the company public on NASDAQ, and Bobby watched him on TV ringing the opening bell on the first IPO day of trading. Bobby thought he was going to make a killing on the stock. Rick even employed a friend who Bobby had introduced.

Enterprise exposed as a complex fraud

The result was something far from a success. From top to bottom, the operation was a complete pump-and-dump scam. Rick was raising money selling preferred shares, speaking at conferences everywhere, in order to raise the stock price. With the millions of dollars he took for preferred shares, with all the press releases, Rick really did have a business, but it was not nearly as profitable or busy as he had claimed.

Rick was arrested at an airport during an SEC investigation of his fraudulent pump-and-dump scheme. He had been taking money from the company promotions and funneling it through multiple offshore companies in Belize. In turn, those companies had brokerage accounts with tiny firms in the US, which were buying up all the shares to inflate the share price of the listed company in a big money circle.

By doing that, if the share price was $10, Rick would take all the money he had raised at a conference, $5 million for example, funnel it through the Belize companies, and would buy $5 million worth of stock. This blew the price up. He was also paying “analysts” to write glowing reports on the listed company. The stock would then rise from $10 a share to $15 to $20, and he would through his private holdings, sell them the shares at a profit through the Belize companies.

It is difficult to believe that NASDAQ actually listed this company without enough due diligence to realize the scam for what it was. Sadly, Bobby’s friend who worked for Rick was named in the SEC charges and was jailed for six months, because he was a “public figure”, and even though he had no knowledge of the scam side of the business.

Don’t take anybody at their word on an investment. If you’re investing in a project, especially one that is within an alternative asset class, such as a condo in Panama, don’t just look at a smooth-talking salesman and a really great PowerPoint presentation and give him a $50,000 deposit. Go to Panama, look at where they’re putting shovels in the ground, see if they’re actually building something, do a little bit of homework and spend a little money to investigate, fly down to Panama, for example, and if that $1,000 in an air ticket saves you $50,000, it will surely be worth it.

Know yourself and find your investment comfort zone. Invest in an area you know about and stay in it. Bobby has a comfort zone that works for him, but when he has strayed from it, he has paid the price.

“I’ve been investing for 30 years, and every single time … I started making investment decisions that were outside of my area of expertise and my comfort zone, they would never go well.”

If you go outside your comfort zone, do a great amount of due diligence before you throw your money down.

“Whether the project is a complete scam, or just poorly executed, the results are the same – you’re still going to lose your money – so do your homework.

Mistake No. 2. Failed to properly assess or manage risk.

Believe no one. Try to make sure that people can prove their claims or that proof is made readily available.

Don’t hesitate to ask for advice. However, usually people fail to ask for advice until it is too late, because they are too excited about the potential return, which blinds them to possible risks.

Find someone whose interests are aligned with yours. This can be someone with expertise in the asset class and location you are investing in, such as a good lawyer in Panama, for example, if it’s a real estate deal there, who can understand what’s going on and hopefully keep you out of a scam.

To build his crypto-mining operation to maximum capacity, taking advantage of his location’s inexpensive electricity bills. He does believe crypto prices will return to former levels and is a big believer in blockchain technology in general.

The number one investment you can make is in yourself, your own education and spending your time with people who are going places, can lift you up and whom you can lift up also.