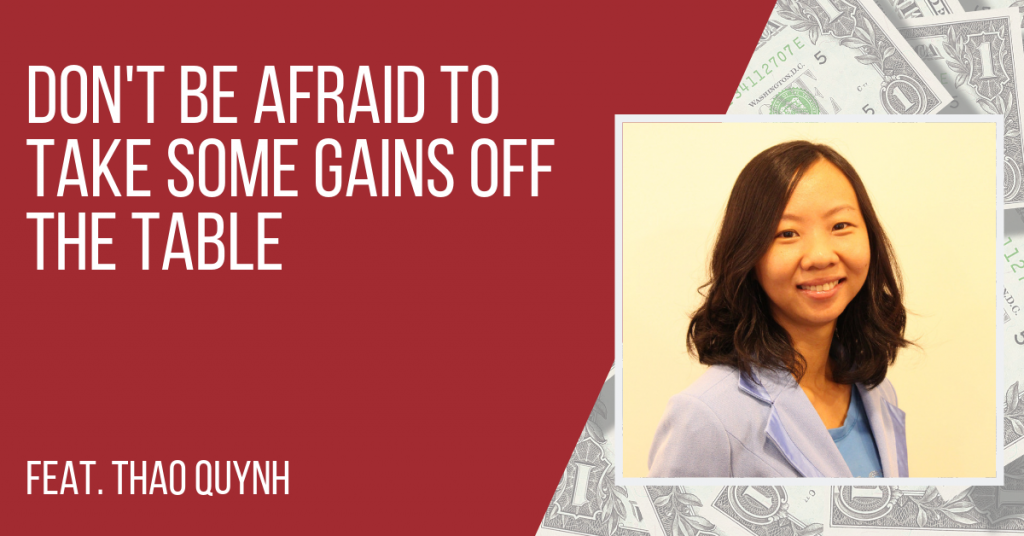 Thao Quynh has 15 years of experience in the financial service and investment industry. She was the investment portfolio manager for two European funds with US$280 million of assets under management. Prior to that, she worked as a financial analyst and research manager for leading brokerage houses in Vietnam. She started out with a university tuition loan to create the asset of knowledge and it is this knowledge that has given her financial security. She believes in diversifying across various asset classes and allocates about half of her wealth to investing in the stock market investments. Thao holds a master’s degree in international business from SKEMA Business School in France and an MBA from the French-Vietnamese Center for Management in Vietnam. Today she is serving her country as an investment manager and portfolio strategy manager at Vietnam Holding Asset Management.

The year 2007 was a boom time for the relatively young Vietnamese stock market and everyone was excited about the kind of profitability in which returns of double or triple were quite normal.  The VN index chart had soared from around 680 in late 2006 to its peak of around 1179 in March 2007. Several companies were trading at 70 times PE and 100 times PE, showing what is considered a bubble at that point. 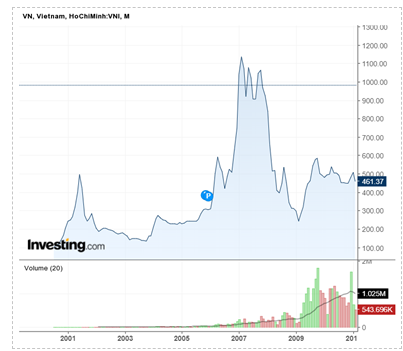 The VN index chart had soared from around the 680 mark in late 2006 to its peak of around 1179 in March 2007. The latter year was when naïve investor Thao started to invest and got caught up in the excitement and greed. Source: Investing.com

In the same year, Thao invested in a Vietnamese start-up brokerage house. It looked a good prospect for the following reasons:

So all up, it had good financing potential, network advantage, and management capability. This investment was at first a big success. Two months in, the stock price had gone up around 18%. But Thao didn’t sell because, by her own admission, she got greedy and expected it go higher. She even rejected an offer to buy her shares on the over-the-counter (OTC) market at 2.5 times her cost price.

Thao doubted that the bubble would burst at that time because everyone was expecting robust growth in the economy since the country had just joined the World Trade Organization (became a member on 11 January 2007) and that this would be a good catalyst for corporate performance and stock prices. However, the unexpected happened when that same year the Vietnam stock market showed for the first time some correlation with the US market. The global financial crisis was showing early red flags with the Lehman Brothers collapse. Her investment went from a profit of 2.5 times to a loss of 50% in just a year and liquidity was a big factor as no one wanted to buy after the bubble had burst.

Regret hit Thao over this investment but she decided to ignore it. She consoled herself that the stock price would recover one day. But that only happened nine years later. Thao sold her investment in 2016 at break–even point on her initial price.

“It did recover but nine years later. I sold my investment in 2016 at its break–even price so, although I suffered only a nominal loss, I had a big opportunity loss for not selling at the right time and for keeping it for too long with that awareness of the bubble.”Thao Quynh

Unrealized losses are real. Andrew asks this question because understanding what is at stake here will help in evaluating the content of your portfolio:

If I didn’t own this stock today, would I, knowing what I know now, buy it today for my portfolio?

If your answer is yes, then just keep holding it. But if your answer is no, then it may make sense to sell it. There are a hundred different potential stocks that you may find interesting that you could put that money in to.

“The probability of the stock market going up, that particular stock going up maybe much higher than the one that you’re currently holding.”

To avoid the same fate

Thao suggests to continue learning, research every investment carefully and be disciplined with carrying out valuations.

Thao has started working on her own business, which is educating children in finance and business practices. She is very excited about this project and will be working on it for the next year in the hope that it’s a great success.

Be disciplined with the valuation when it gets super high. But, there is nothing at all wrong with realizing a little bit of gain.