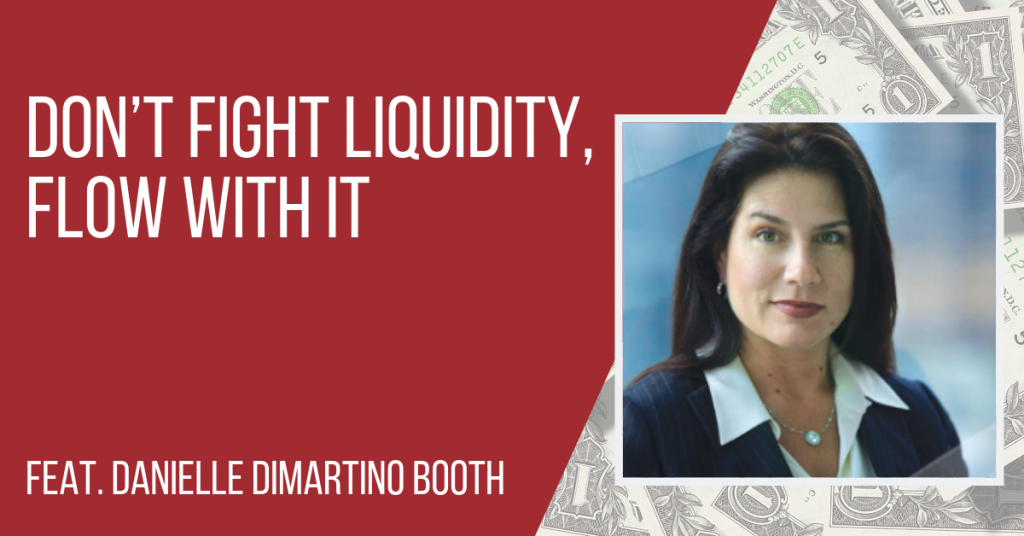 Danielle DiMartino Booth is CEO and director of Intelligence for Quill Intelligence LLC, a new research and analytics firm. She is known for her meticulous research in the financial markets and her unique perspective honed from years of experience in central banking and on Wall Street. Danielle is a global thought leader sought after for her insights on monetary policy in the United States and abroad. As a sign of the high value placed on her expertise, European Parliamentarians invited her to Brussels in May 2018 to share her insights on global economic trends and fiscal policy.

Last decade, Danielle spent nine years from 2006 at the Dallas Fed, where she served as advisor to that district’s president, Richard W. Fisher, until his retirement in March 2015. She provided market intelligence and policy briefings and advised Fisher on policy, a unique role that had not existed outside of the New York Fed before her appointment. Get to know Danielle in today’s feature story, her remarkable career journey from working in equity markets, then as an advisor to Fisher, to her current role as a financial consultant, author, and commentator. More importantly, discover what she regards as her most significant investment loss and the valuable lessons she learned from it.

“My biggest lesson that I’ve ever learned is that I will never again deny the simplicity and the utility of liquidity and it’s as simple as that.”

Analyst has also dodged some major bullets in her time

While these podcasts are about the missteps our guests have made, Danielle has also had a considerable share of good fortune or made decisions that saved her from calamity; none perhaps more than when she turned down employment offers from four of the most ill-fated companies in US history: Arthur Andersen, Enron, Lehman Brothers, and Bear Stearns.

So, as she told Andrew: “You never know in life that your choice might just end up being serendipitous but indeed providential at the same time.” This all happened right before Danielle started working on Wall Street, which was ahead of her return to Dallas to serve at the Federal Reserve. This was also a move she had never planned to make. Danielle revisits New York every two or three weeks to contribute analysis to media outlets as a “Fed Whisperer”, offering explanations as she “understands how central bankers think”, a rare talent indeed.

‘Architect’ of liquidity reboot fails to take own advice

As a Fed insider, Danielle witnessed the meltdown following the financial crisis of 2007-2008. Her Dallas Fed boss at the time, Richard Fisher, was being criticized for comments against the Fed lowering interest rates to the “zero-bound”. He had pointed out that the ongoing problem was not a case of the price of credit being the impediment to the market working but rather liquidity being frozen, despite it being richly liquid in the preceding years.

Danielle reviewed and understood her boss’ comments. She had helped to create many of the liquidity systems applied via the New York Fed. She had helped to turn on the financial “jaws of life” to force open the capital markets with liquidity facilities. What she realizes now is she had listened but not truly heard, looked but not truly seen, and had learned little from her experiences.

Despite being “one of the chief architects of these facilities”, she said was perhaps blinded by the emotion brought on by taking interest rates to zero unnecessarily. She then saw first-hand the collapse of the global investment bank, Lehman Brothers, and the bailout of AIG at the cost of US$85 billion. In the following months, she saw quantitative easing (QE, more or less printing money) rolled out and the effect that had on financial markets. Again and again, she failed to recall the lesson she had taught others about the importance of liquidity.

Now 10 years on, Danielle notes that the European Central Bank (ECB) has finally stopped its QE program (one of the measures used to stimulate liquidity and therefore the markets) early this year but warns that it is going to be the first time in more than a decade that the economic world will be “net negative in a global liquidity position”.

1. When liquidity opened up, Danielle says she should have jumped in feet first and invested enthusiastically to follow the flow until ECB chairman Mario Draghi put a halt on the ECB’s QE, but not until then because …

2. “Liquidity is global. It is fungible, it is agnostic, it knows no borders, and it knows no asset classes. It flows to wherever the cracks are open.”

Liquidity moves where it can “find a home”. Every single asset class in the world has moved up, even gold, because of the rise in liquidity, which, over the past decade, “has found many homes”:

3. Investors need to understand that as long as the wave of liquidity exists, they should not fight the waves. She explains: “As long as the liquidity is abundant, then you should be invested in risky assets.”

4. BUT: Now that liquidity is being withdrawn, the markets (and investors) do not like it at all.

5. Investors worldwide should be really aware of what central bankers are doing, and that is, all central bank bosses are applying the same policies

1. Looking back at Danielle’s time at the Fed, interest rates were coming down.

2. As she said, the price of credit, in other words, the interest rate, did not cause tightening in that market. Instead, the banks were flush with cash, but they were not lending.

3. Though lending rates were low, banks were risk averse and had held back on lending.

4. The Fed stepped in and tried to get liquidity moving in the system.

5. When interest rates are brought down and floods of money come into a system, you usually get two things:

Debt and how investors should prepare for the storm

Danielle A1: Both, sadly.

“You always take your profits off the table. If you want to let the dice roll, leave your cost base is there, take your profits. Put them in something safe, call it a day and you’ve still got a foothold in your original position.”

In other words, when she was working on Wall Street, Danielle used to have a yellow post-it on her computer that said:

“Pigs get fat; hogs get slaughtered.”