Vorapon Jim  Ponvanit is the founder and CEO of a PeerPower, a Fintech start–up focusing on SME marketplace lending in Thailand. He is also a partner in boutique advisory firm, Khronos,and has 18 years’ experience in M&A, investments, and restructuring. He is an educated investor in stocks, bonds, and has a solid, diversified portfolio. He and his wife are also avid food connoisseurs and share a love of dogs.

In this episode, Jim shares the gems he has learned on his investment journey, including how research alone is not enough to guarantee your success. There are “what–if” questions all you investors out there need to ask to substantiate your assumptions. And, the exciting part is to identify the common investment mistakes you can avoid and to “wait for the right pitch”. Since investment is a lifetime exercise, you’ll also learn more about the six-step guidelines. Andrew offers to help you to better understand the investment process.

“The whole point of investing is you want to live to fight another day. And you want to make sure that you have fewer mistakes and more successes. That’s all you can hope for because nobody hits home runs every time, right?”

Around eight years after the 2008 financial crisis, Jim started to liquidate his US portfolio. He put some money into structured bonds and equities, which made considerable gains in the following run-up of  US stock markets.

He then took that liquidity in mid-2015 and was looking to diversify and make use of his capital. At the time, his obsession with volatility began alongside a search for ways to trade on such conditions, and so he took a look at the VIX index.

He found there was no direct way to expose investors to that index, other than buying derivatives or self-building a portfolio, but he noticed a new product called exchange-traded notes (ETN).

Armed with research noting that the VIX was down around 40% year-to-date and brimming with confidence and cash from successes on the US bull market, he invested 50% of his liquid funds in one such ETN, the iPath S&P 500 VIX Short-Term Futures ETN (VXX), which he thought would track the VIX index well. He had convinced himself that volatility had reached its bottom since the crisis, the side of the research that backed his story.

Four months in and 40% down, he does more research and invests more cash

A third of a year into the investment, and with his position down 40%, did he pull out? No. He did more research and after that, remaining convinced that volatility had this time reached its lowest point, proceeded to put the other 50% of his hard-earned cash in. 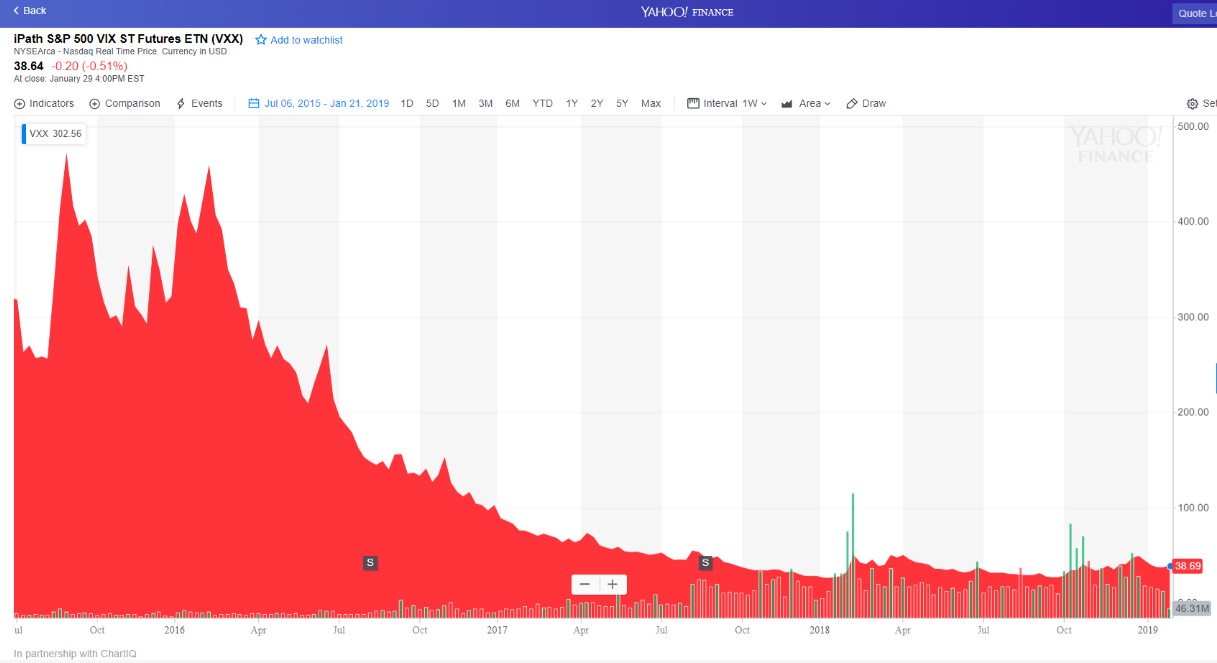 The chart above tracks the downfall of the VXX ETN volatility product that Jim invested in from July 2015 (until early 2017). VXX reached maturation at the end of January 2019. Source: Yahoo Finance/ChartIQ

After a year, Jim had lost 70% of his injected fund

Early in 2017, he liquidated from his portfolio the position in VXX and lost close to 70% of what he put in during the course of 14 months. He recently checked the price of VXX and if he had held on to that position, he would have been down 87% now, which he said was a minor consolation.

That was his worst investment ever, and not because he didn’t know what he wanted to do but because he actually went in with a plan, found research that supported that thesis, and kept on reading. He stuck to his contrarian nature and ignored what the market was saying, thinking ideas that opposed his thesis were just “people selling research”.

1. Avoid overconfidence – Don’t be overconfident, no matter how much you know or how successful you have been with investing in the past.

2. Don’t practice information-selection bias – In carrying out your research, include all information in your assessment of whether to go ahead with an assessment, especially if research contradicts your initial thesis. And furthermore …

3. Listen to the market

1. Research is no guarantee of success – Many people don’t do any research before they invest. This is the number one error out of all of the errors or mistakes made by people Andrew has interviewed.

On the other hand, people who research often build up a thesis supported by their research, which is no guarantee that they are going to see good performance.

… sets out the best way to build a position into an idea and invest. This is based on 500 stories submitted to him and 35 interviews in this series:

a. Find an idea

b. Research the return

2. Separate research about return from assessment of risk. This is a key clarification inherent in the six-step process above. Often when doing research, investors think that risk management IS research. It’s great to spend time researching the exciting potential you are going to earn from a particular idea. Enjoy that process. Learn as much as you can but then stop that process to say “This looks good”. Finish the research. Then move to the next step, which is assess the risk.

3. Find opposing views of smart people – This gives investors a practical, real-market, beyond-research-and-theory perspective and helps avoid the one-track mind that can result after being buried in books, news and analysis.

Jim added some final points on lessons learned, which include the idea of taking a step back and question your assumptions by asking the “what-if” questions. Ask yourself:

These questions can be asked in addition to Andrew’s six steps and could have saved Jim in that he would have lightened his position or avoided throwing good money after bad. He implies fighting the emotional battles to “get a grip on your human nature and start questioning some of these [assumptions and attachments] in an objective light”.

To avoid the same fate: Remember Andrew’s six guidelines, take a step back and question your assumptions. If all of that reviewing is sound: “Put in your money, but don’t put everything in.”

Paraphrasing Warren Buffett, Jim likens investing to baseball in that you can stand and bat all day. “You don’t have to swing if you don’t like the pitch.”

“Wait for the right pitch.”

“What have I learned in all these years in finance [is] reduce risk  … as we get older, the idea of reducing risk and protecting our exposure is critical.”