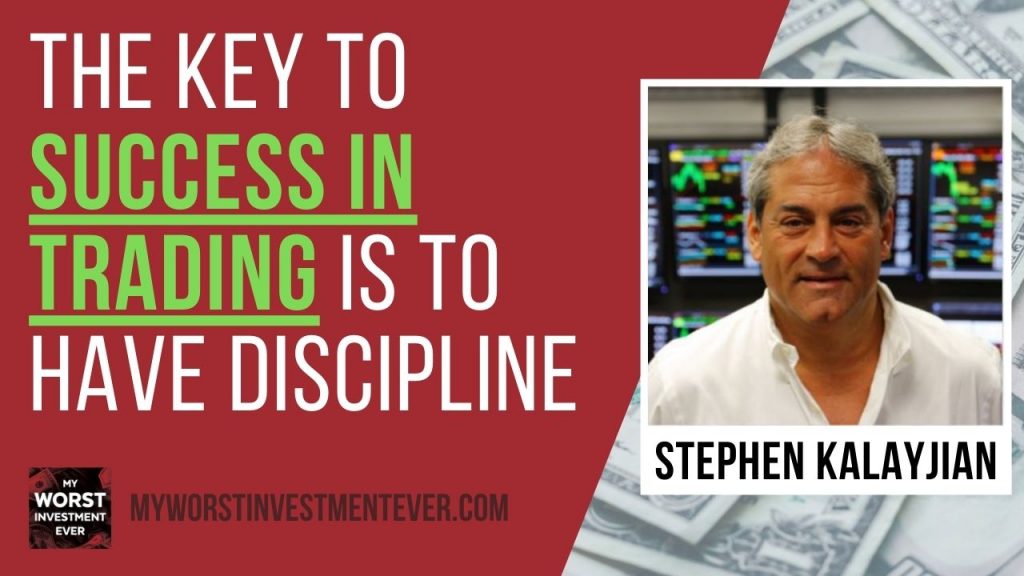 BIO: Stephen Kalayjian is a Chief Market Strategist and Co-Founder of Ticker Tocker, a firm that researches and develops software to help identify trends, reversals, patterns, and divergences in the marketplace for all asset classes and time frames.

STORY: Stephen had a little over $3,000 saved up, and he wanted to invest it. He opened an account at his father’s friend’s brokerage and bought 550 calls betting that the stock was going to go higher. He never thought about premium depreciation. Over the next couple of weeks, the stock started to drift lower. Eventually, his entire investment went down to zero.

LEARNING: To err is human, we learn from the mistakes we make. Adhere to the preservation of capital and discipline. Take risk management seriously and have discipline when trading to avoid losing your money.

“If you’re gonna invest or trade, you got to have discipline.”

Stephen Kalayjian, Chief Market Strategist and Co-Founder of Ticker Tocker, has over 30 years of experience in the industry trading stocks, futures, and currencies, having begun his career at the American Stock Exchange in 1983.

In 2005, Stephen founded his firm to research and develop software to help identify trends, reversals, patterns, and divergences in the marketplace for all asset classes and time frames. Stephen seeks to generate high alpha trading ideas throughout the day. He and his team employ technical analysis through utilizing the proprietary charting software he developed on Ticker Tocker to forecast the market.

Stephen has traded nearly 2 billion shares over his career.

Thirty-seven years ago, before Stephen started working at the American Stock Exchange, he was making $2.10 per hour cutting grass, cleaning windows, washing cars, cleaning basements, and garages. He just did whatever he needed to do to survive. After about 1,500 hours of work, Stephen had a little over $3,000 saved up, and he wanted to invest it.

It was while working at the floor of the American Stock Exchange when Stephen opened an account at his father’s friend’s brokerage and bought 550 calls, i.e., he bet that the stock was going to go higher.

Stephen only focused on the assumption that the stock could go higher, but he never knew about premium depreciation. He had no idea that if the stock went down, the call option would go down too.

Over the next couple of weeks, the stock started to drift lower, and right before Thanksgiving, the stock got worse. Right around Christmas, Stephen was broke beyond broke. His entire investment had gone down to zero.

It’s ok to be wrong

Nobody wants to admit when they’re wrong. What they don’t realize is that it’s ok to be wrong because we are all human. We learn from the mistakes we make.

No one’s bigger than the market

Adhere to the preservation of capital and discipline.

If you cannot afford to lose money, then you should not gamble. Be more careful and take risk management seriously.

Discipline is a critical thing

You cannot just roll the dice when you feel like it. Have discipline when trading to avoid losing your money.

The key to success when trading is discipline. Just as you employ discipline in other areas of your life, you need to have discipline when trading so that you know when to keep going and when to quit.

Stephen’s number one goal for the next 12 months is to inspire people to learn the right way with Ticker Tocker. His goal is to help people change their lives.