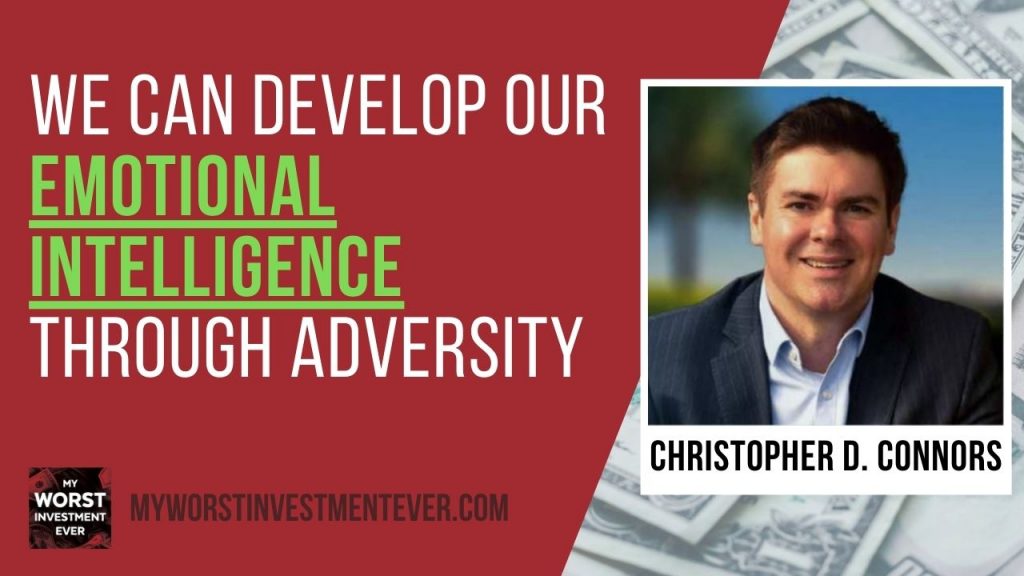 Christopher D. Connors is the bestselling author of Emotional Intelligence for the Modern Leader and The Value of You. He is an author, executive coach, and keynote speaker who helps leaders increase their emotional intelligence, prioritize goals, and build thriving organizations.

He works with executives and leaders at Fortune 500 companies, sports organizations, schools, and universities. His writing has appeared in CNBC, World Economic Forum, Quartz, CEO World, Virgin Media, Thrive Global, and Medium, and he’s been a guest on FOX and ABC TV programs.

Christopher is happily married to his beautiful wife and is the proud father of three amazing, rambunctious baseball-loving boys. He lives in Charleston, South Carolina.

“Adversity is your best friend. In every adversity, there is always an opportunity that is going to come out of that.”

Christopher grew up just outside New York City on Long Island while his wife grew up in South Carolina. They had been living in New York when the wife said she wanted to leave. And so they decided to relocate to Atlanta.

Christopher wasn’t emotionally or mentally prepared to make a move, but he did it anyway as it was the right move for his family. Physically, Christopher was in Atlanta, but mentally, emotionally, and spiritually, he was still in New York. He was living this life where he was just struggling to put the pieces together.

While Christopher was struggling to adjust to the new life, career-wise, he was thriving. Christopher landed the most prestigious job opportunity he’s ever had. The job was very high paying, and he got to work with some of the top corporate clients in all of Atlanta, including Coca Cola, Delta, UPS, and the Home Depot.

His head was just not in the game

Despite having landed the job of his dreams, Christopher was still not settled and was struggling to adapt. He was still trying to figure out a little bit more about himself in terms of what he truly wanted to do. Even though on paper, this opportunity looked like a dream job, the more he went through it, the more he realized it wasn’t.

Christopher tried out a couple of different assignments that didn’t work. He just wasn’t able to employ emotional intelligence to be able to separate his personal life from his work life. About 10 months into it,  he was fired. Here he was less than a year into a move with a young son and a wife, and all of a sudden, he didn’t have an income coming in.

It was a big blow to his ego because he had been successful in all of the other previous jobs that he had been in.

Figuring his next move

Getting fired was entirely unexpected for Christopher, but with a family to take care of, he had to bounce back soon.

Christopher had always had this burning desire to write and coach just lying underneath the surface. He had treated them as hobbies for so long and just doing it a little bit of on the side. Now that Christopher had time on his hands, he started to build up a little bit more, and with time he turned it into a fulltime venture.

Christopher admits that his poor performance in this lifetime job opportunity remains his worst investment ever; however, he’s thankful that it happened because he mustered the courage to kick the fear of venturing out entrepreneurially in the butt.

Adversity is your best friend

Don’t fear pain and failure. With every adversity, there’s the opportunity or the equivalent seed of an advantage. Learn to see opportunities within your adversities, and you will thrive.

Start taking the initiative to go after the things that you have the skills for, but have previously been too afraid to do. Your success depends on the actions you take today.

Plans are nothing; planning is everything

Have a plan in life and take action to turn those plans into reality because plans are nothing planning is everything. Know that plans will change, but that doesn’t mean that you shouldn’t plan.

Move from thinking to doing

Make all of these things that you’ve always believed that you can do actionable. You need to move from just thinking and talking about these things and start doing them. Muster the courage to start putting your ideas out there, and you may just surprise yourself.

It gets hard before it gets easy

Sometimes we just have to hit rock bottom to become our best versions. It has to get hard enough and painful enough for you to decide that you’ll do something different.

Our adversities make us who we are

It is our adversities, our struggles, our mistakes, and our losses that spur us to new opportunities.

First, listen to your heart about what you truly want to do. Second, don’t live in the past; be willing to adapt.

Christopher’s number one goal for the next 12 months is to be a great dad. The couple just welcomed a newborn child into the world. From a professional standpoint, Christopher plans to continue building his coaching business and working with people that he deeply admires in a variety of industries. He also has some ideas for a third book coming up and has started laying the foundation for that.

“Follow your heart and intuition. Mix this with a plan that’s coupled with the talents, skills, and experiences that you have. Then just go for it.”