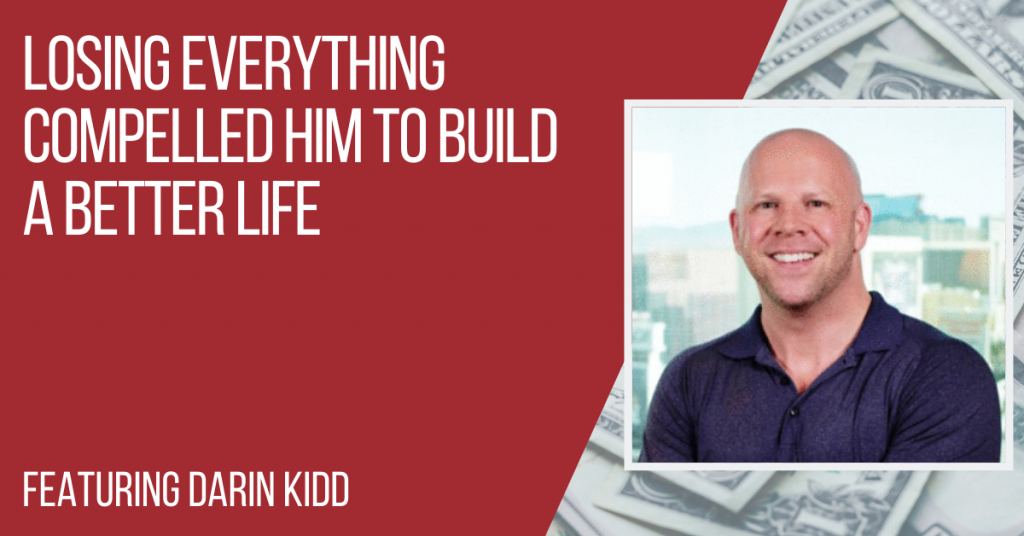 Darin Kidd is an entrepreneur who has achieved success in various arenas. He was a leader and multiple-seven-figure earner in the network marketing profession, building massive teams all over the world. He has owned profitable franchises and has built his online digital brand, which is now consumed by hundreds of thousands of followers on social media. He has been featured in various magazines and books, was on an advisory council with John Maxwell, and has been interviewed by Grant Cardone on Grant Cardone TV. Currently, he is a speaker, trainer, and mentor for others.

However, he was not always a successful businessman. Over 20 years ago, he was bankrupt and felt like a failure. He managed to emerge from that experience with a unique perspective and an “I Will Until” attitude on life. He genuinely wants to help people “be more, do more, and have more” in their life.

“It’s about progress, not perfection. Just get a little bit better every single day.”

From debt-free to bankruptcy

Darin got successful in his early 20s. Everything was going superbly well. He was debt-free, had money in the bank, 401k, some investments, and more. One day someone moved into Darin’s town, and after some time, he convinced Darin that if he paid him up front, he could build his dream home for him for a lower price.

The deal sounds too good to be true? It was. The dude walked off in the middle of the construction, and everything he had done to the house was off. And just like that, Darin went from debt-free, perfect credit, money in the bank, 401k, and new cars to bankruptcy and a repossessed car.

He couldn’t feed his kids or support his wife. Darin’s family was now on government assistance, Medicaid, and applying for food stamps. Darin went from a successful businessman to a depressed man.

Darin’s family had this big Coca-Cola plastic piggy bank, which they were putting change in. Darin had promised his daughter that someday they’d go to Disney World. One night, after losing everything, Darin and his wife were in their bedroom when the daughter walked in. They had dumped out the piggy bank and were going through the change to try to get enough to buy something to eat. The daughter ran out of the room, crying and saying dad had taken her money for Disney World. Darin was so devastated and couldn’t believe how low he’d gone to the point of stealing money from his kids’ piggy bank.

It was at this moment that he decided it was about time he took action and start building a better life for his family. This was when he took on the “I Will Until” attitude on life, which helped him rebuild his life and become the now-renowned successful businessman he is.

It’s not the easy times that make us grow but the difficult times. There’s no elevation without obstacles. So appreciate the challenges and learn and draw strength from them.

Practice getting a little bit better today than you were yesterday because the simple things you do daily that seem insignificant compound over several years and completely change you.

Do what others are not willing to do

Do what unsuccessful people are not willing to do. Do today what others want to do tomorrow, and success will follow you.

You become who you hang out with

Never compare your insides to other people’s outsides

Always remember that people are suffering inside, no matter how successful they seem. They are in pain and facing one issue or another. People, however, tend to see their own pain more clearly but don’t see other people’s pain because you only see their outsides and not their insides. So don’t let what you think you know about people intimidate you or hold you back.

Invest in yourself. We don’t make what we want; we make what we are. If we want to make more, we have to become more. So don’t try to figure it out yourself. Find a mentor or a coach to walk the journey with you.

Darin’s number one goal for the next 12 months is to impact over 1 million lives through consulting, coaching, training, mentoring, and courses.

“Be persistent, consistent, have a good attitude, and remember progress, not perfection. The best time to quit on your goals is never.”