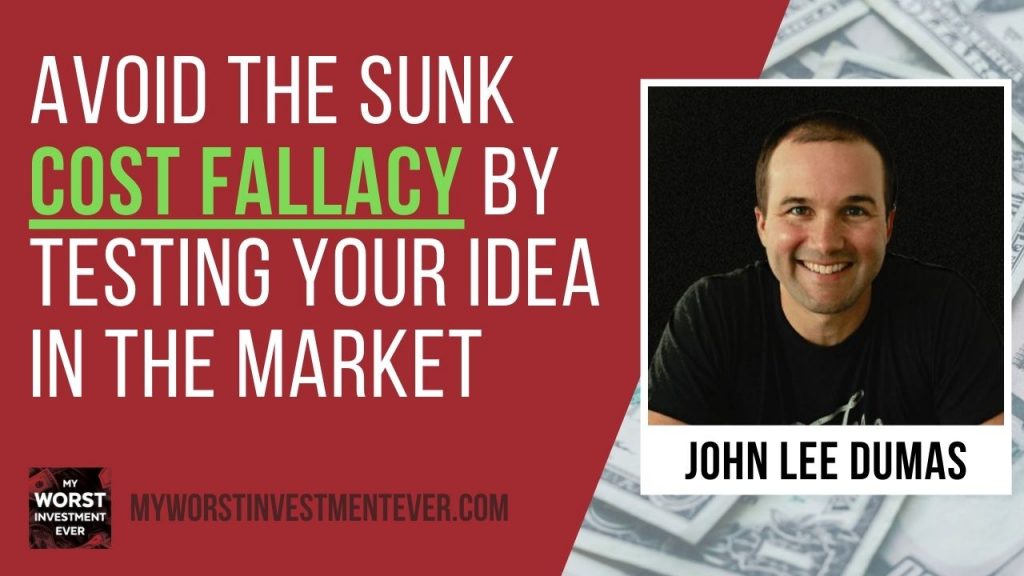 John Lee Dumas (JLD) is the host of Entrepreneurs on Fire, an award-winning podcast where he has been interviewing the world’s most inspiring Entrepreneurs. With more than 2,000 episodes, one million-plus listens a month, and seven-figures in annual revenue, JLD has learned a thing or two about podcasting.

I learned about podcasting from John and joined his podcaster’s paradise in 2014. It is a community of more than 2,500 people and is the place to go to if you want to become a podcaster. I highly advise those who wish to become podcasters to go to the Apple Podcast called “Free Podcast Course” and listen up.

“I never have since then created something that I didn’t first get proof of concept by actual people investing actual dollars into that offer.”

When JLD was in college, he found this penny stock after reading some guy’s website. The stock was six cents at the time. JLD invested $1,000 instantly and planned to sell when the stock got to eight cents. He left it at that and went to class.

JLD came back 45 minutes later, and the stock was at 12 cents. In literally 45 minutes, he’d made 1,000 dollars, which for a college student was a big deal. So he thought this is the best way ever to make money. So he cashed out immediately and sold his stock.

Then the stock went up to 18 cents as he watched. JLD regretted selling and so out of guilt, he bought the stock at 18 cents and went to bed. He woke up the next morning and logged in around 11 am and the stock was down at 3 cents.

JLD experienced first initial luck to double his money and then lost it all, and all this within 24 hours.

In 2013, JLD was one year into Entrepreneurs on Fire when he thought it would be a good idea to come out with a course with an offering. He’d built an audience through his podcast and understood what it means to generate revenue online. So he sat down and came up with this great business idea.

JLD’s idea was going to be this podcast platform where customers would simply record their episode, send JLD the mp3, he would edit it, add the intro and the outro, upload it to Libsyn and distribute it out to all the podcast directories.

Putting his heart and soul to his offer

JLD invested heavily in this idea. He hired about 10 people to work with the clients he had hopes of getting. He invested a ton of money, time, and bandwidth into it. And then he opened the doors.

He couldn’t have failed faster

Upon launching the offer, JLD got just two clients. One of them asked for a refund within 24 hours. The second one ended up being a nightmare client.

He quickly learned that this was an incredibly lousy investment and decided to call it quits. Despite the offer being his worst investment ever because it costs a lot of time and took a lot of money, he was glad to have walked away and not let the sunk cost fallacy take him down.

JLD went on to create another offer, after proper planning, and it remains a massive success to date.

Listen to your audience

Before you create an offer, ask your audience what they want. Find out what’s their most pressing need and the most suitable solution, then offer them that. Listening to your audience will guide you in creating an offer they will want to pay for.

Get proof of concept first

Before you create something, get proof of concept by getting a few people to invest actual dollars into that offer.

Your timing could be everything

Just because your offer doesn’t work the first time doesn’t mean that it’s a bad offer. The timing could be the reason. Your offer could be something that works down the road when the time is right.

Don’t let the sunk cost fallacy take you down

If your offer fails, don’t keep pushing it just because you invested your money, time, and energy in it. You’ll only be digging yourself in deeper. Take a pause and re-evaluate your offer then give it a second go. To succeed as an entrepreneur, learn how to avoid the sunk cost fallacy.

You always have something of value to offer

Sometimes you can get confused about what value you bring to the audience. Your voice, your experience, can end up being the thing that people are willing to pay for. Talk to your audience and find out what they find most valuable about you.

JLD’s number one goal for the next 12 months is to complete his first traditionally published book, called The Common Path to Uncommon Success. So the first hour of every day for JLD, Monday through Monday, Saturdays, and Sundays included is spent writing this book. He plans to publish the book in the spring of 2021.

“Try not to become a person of success, but rather a person of value. Those words are from Albert Einstein, and they changed my life back in 2012.”