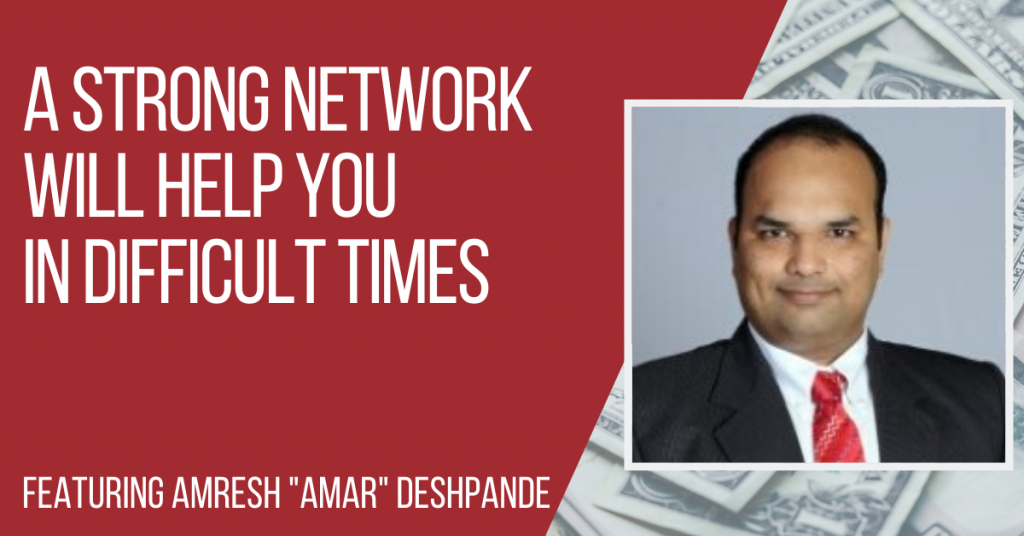 Amresh “Amar” Deshpande is a skilled communicator with a background in marketing, consulting, and sustainability. He is a public speaker and podcaster. He is the co-founder of Gaatha story, a podcasting company he founded with his wife in 2016. Amar is the creator and host of MyKitaab, a podcast on how to publish and market your book. He is also the creator of Baalgatha, Fairytales of India, and Veergatha Podcasts. He is a published author and blogger and has been featured in the Financial Times and Entrepreneur India.

Amar has over 17 years’ experience in program management, construction, and communication with organizations such as Amazon, Schneider Electric, and Jones Lang LaSalle. He is an alumnus of IIM Ahmedabad, India and the University of Illinois at Urbana Champaign in the US.  He is passionate about sustainability and is a USGBC-LEED Accredited Professional.

“If you know you’re going to dive into the deep end right away, either have a lifeguard around or wear a floater so that you don’t sink.”

Uprooting his life on a whim

Eleven years ago, Amar found himself in a situation that demanded him to eradicate his life from the US and back to his home town in India. His parents were getting old and in need of care. At the time, Amar was supposed to go to Canada for business school, but without giving it a second thought, he put everything on hold and went to India.

Amar planned to give everything a break for a year and then go back to the United States. He figured that the life he had built for himself would still be there after a year, but his parents might not live for long. So for an entire year, he gave his all to his parents.

Putting his career on the back burner

Unfortunately, life didn’t play out as Amar had planned. After the year was over, the situation with his parents hadn’t improved. Even though his senses told him to leave India for the sake of his career, Amar ignored his feelings and continued his stay in India. His love for his parents clouded his judgment.

Since Amar had planned to stay in India for a year then head back to the United States, he never networked with people in India nor got in touch with his colleagues back in the States. Amar should have probably spent that year networking and cultivating relationships with his co-workers, his clients, and customers. Instead, he completely put everything concerning his career on hold. Now here he was a year later in need of a job in India with no idea where to start.

Fortunately, Amar got a job consulting for construction companies, but he had to move from his hometown to Mumbai, where everything was super expensive. On top of that, India was going through the economic effects of the Lehman crisis, and businesses were suffering. While he had a few dollars saved, the exchange rate was pretty low, and so he ended up losing 20% of his savings.

Things go from bad to worse

As if losing his savings was not enough, the Monsoon hit, and everything came to a standstill. He was no longer getting a salary as the construction industry was dead.

Before long, Amar found himself completely broke and had to sleep in the streets because he couldn’t afford to pay rent. Sleeping in the streets was the wake-up call that he needed. He made a resolve to turn his life around. Amar realized that he was still living in the glory of his past life. He decided to let that go and start again. The next day he quit his job, moved back with his parents, and began rebuilding his life in India. Amar went on to build a successful entrepreneurial life in India, where he lives to date.

Take time to think things through before making a drastic change in your life. This will help you see things clearly and avoid making an emotional decision.

Have a strong network

It’s imperative to have a network of friends who can be your sounding board when you’re going through a difficult phase in your life.

Invest in your career throughout

No matter where you are in your life, always work towards improving your career. Invest in networking for career development so that you stay on top of your game.

Go back to your roots

If things are not working out as you hoped the will, let go and go back to your foundation and start rebuilding yourself from the ground up. This will bring you quite a relief.

Keep simplicity in your life and your business. Keeping things simple will allow you to achieve more.

Invest in your network no matter the occasion. You never know when you might have to reach out to certain persons or organizations for any sort of help.

Amar’s number one goal for the next 12 months is to create more content for Gaatha story to build a more extensive library. Amar is also reaching out to his network, especially during this time of the COVID-19 crisis, and checking up on them.

“These are tough times, but it’s cyclical. So at some point in time, you’ll reflect upon these times and see how much you learned. So, stay strong.”