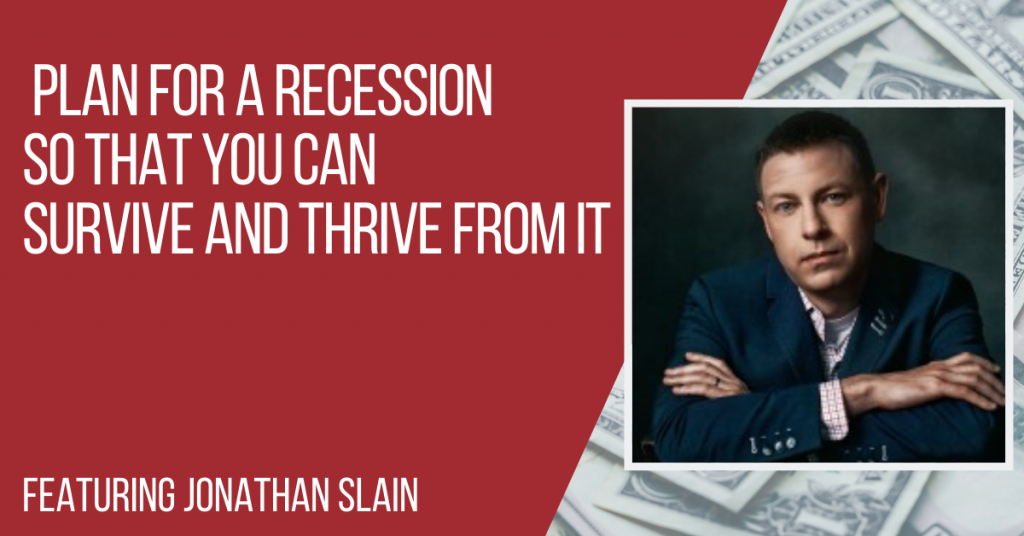 Jonathan Slain’s book, Rock the Recession: How Successful Leaders Prepare For, Thrive During, and Create Wealth After Downturns came out in September 2019 and is a #1 Amazon Best Seller.

Jonathan coaches high growth leadership teams across the United States to implement the Entrepreneurial Operating System®, also known as “Traction”. He focuses on working with entrepreneurial niche/specialty firms and large corporations, spending over 100 days per year working with teams just like yours.

Jonathan was Valedictorian of his graduating class and had the highest GPA ever in the history of Shaker Heights High School, where he was also voted “Next Bill Gates and Least Likely to Lose his Virginity.”

“There’s always going to be a disruption. Embrace it, and have a plan for everything.”

Jonathan was working as an investment banker when he received a call from his brother-in-law asking him to help evaluate gym franchises that he wanted to invest in. Jonathan agreed to accompany him to Denver, where the franchises were.

On the flight home from Denver to Cleveland, Jonathan, on a whim, suggested to his brother that they open the gyms together. His brother-in-law agreed, and Jonathan left his job at the bank and began working with his brother-in-law.

Up to a good start

Jonathan didn’t bother to do any research and had total trust in his brother-in-law. He believed that the business was going to work. They opened up their first gym in Hudson, Ohio, and went on to scale the business pretty fast.

Indeed, the franchise was thriving. In less than five years, they had five units operating, all one-on-one personal training studios. The branches were in five locations across Cleveland, with 25 employees. They broke franchise records by recording the most personal training sessions in the year, the most locations, and the most revenue of any group.

At 25, Jonathan was a thriving franchise owner and was riding the wave of success. Then the great recession hit out of nowhere. They had no plan on what to do at a time of such a crisis.

You’ve got to have a plan

Create your plan when you’re not stressed out

Figure out your plan when things are calm, not when you’re in the middle of a crisis. People tend to make bad decisions when they’re stressed out and emotional.

A recession can be an opportunity

Not every recession has to be bad for your business. If you’re an entrepreneur and once every couple of years, there’s a significant disruption in your industry, figure out what opportunities come with the disruption. Pounce on these opportunities so that you can benefit from the disruption.

Use stop losses for your stocks

Use stop losses when investing in the stock market, especially if you’re a first-time investor. This allows you to predetermine future actions in case of an economic downturn.

Don’t wait for an economic downturn, get your plan ready now

Don’t wait until everything starts to crumble to come up with a contingency plan. Do it when times are good because then you will be in the right headspace to come up with an airtight plan because you are not panicking.

Have both an upside and a downside plan

Separate your research into the upside and the downside. By looking at an idea from both angles, you give yourself a chance to step away from the excitement of having an idea and see the ugly side too. In the end, you may just realize that the idea isn’t that attractive, and not worth doing.

Get the book, Rock the Recession: How Successful Leaders Prepare For, Thrive During, and Create Wealth After Downturns and take the 20 questions recession readiness assessment in it. This will help you benchmark how well prepared you are for the recession. Instead of it being subjective, you’ll get a score from zero to 100. Zero is not prepared at all. 100 is looking forward to the recession, because of how well prepared you are. Once you get your score, then you can decide what you want to do with that information.

In 2020, Jonathan is focused on being at home, in Cleveland, more. He plans to get better at his virtual meeting capabilities so that he can have more virtual clients.

“Rock the recession, be in a position to rock your recovery so that you never have to borrow money from your mother-in-law as I did.”