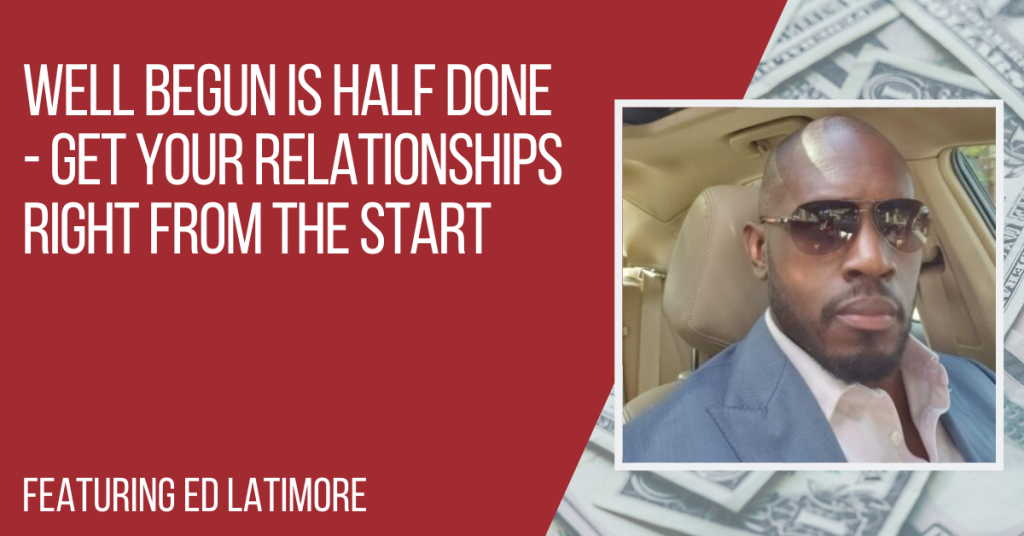 Ed Latimore is a former professional boxer and a veteran of the United States Army National Guard. He holds a B.A. in Physics from Duquesne University and has written two Amazon Best Selling books.

Millions of people have learned from Ed’s insights and experiences through his writing. He teaches the lessons he has learned via his unique path through life at his blog, “The Mind and Fist” at http://www.edlatimore.com. He also delivers daily wisdom and observations on Twitter @EdLatimore.

“If you just work and gradually improve and you’re not afraid to take criticism and suffer, you’re eventually going to get better.”

At 22 years of age, Ed found himself out of the longest relationship in his life. He was a mess, and without much thought, he found himself in the arms of another woman. Blinded by the emotional loss, he felt from the broken relationship, Ed jumped right into another relationship without getting to know the woman first. It didn’t matter to him that she was dating someone else when they met. It didn’t matter to him that her attitude seemed off. All he cared about was that he found her attractive. He just wanted to be with someone who wanted him.

Her true colors start to show

A few weeks into the relationship, Ed realized that his girlfriend was emotionally manipulative and did her best to isolate him from his friends. They would get into constant arguments but he kept going back to her because he found her attractive.

Not too long after they started dating, Ed’s girlfriend dropped the bomb on him; she was pregnant. Ed was distraught! Not only did he doubt the child was his because he came to learn that she had other partners, but also, he was not in a position to raise a child. He was just 22, broke, and living with his mum.

Ed being the good guy he is, didn’t abandon his girlfriend. She moved in with him at his mum’s house. Things, however, got worse. She was cheating on him, was always criticizing him and continued to manipulate him emotionally. Ed was so miserable and emotionally drained but he stayed and hoped things would get better but they only got worse.

Having the guts to leave

Ed wanted to leave the situation, but he felt trapped. His poor financial status made him feel useless and worthless. He didn’t have much to offer, financially, so he stayed so that he could continue living with his mom. It was a miserable situation.

One day he woke up and realized that he was either going to lose his mind or do something that he’d live to regret for the rest of his life. After the worst fight with his girlfriend, he mastered the courage to leave the toxic relationship eventually. He vowed that with his next relationship, he would take his time to choose right and not let heartbreak lead him to another bad relationship.

Vet the people you get into a relationship with

Get your relationships right from the very beginning. You’ve got to make sure you pick people the right way. Ensure that you have a vetting process. Don’t date people just because the opportunity presents itself.

You can learn quite a lot about a person by simply observing the little things once you know how to connect them and what they mean.

Don’t be afraid to have high standards

It’s better to have high standards and lose a few potentially good people but block out all the bad ones than to lower your standards and have way too many bad ones.

Don’t ever be willing to stay in a situation any longer than you have to. Never get attached to something you can’t walk away from.

Get a monetizable skill set. You may go hard at the gym, look as good as you want, be the coolest guy in the block, but there’s nothing quite as freeing as knowing that you have your own money and you’re independent. Nothing gives you more standards, as being able to bring something to the table.

Ed’s goal for the next 12 months is to earn a quarter-million dollars this year. That would be a big stretch in his life. He sat down and figured out that what’s important to him was writing and teaching. Now he wants to continue to double down on that as he keeps sharpening his skills and take on different clients.

“Well begun is half done. If you just remember that you can save yourself a lot of trouble.”