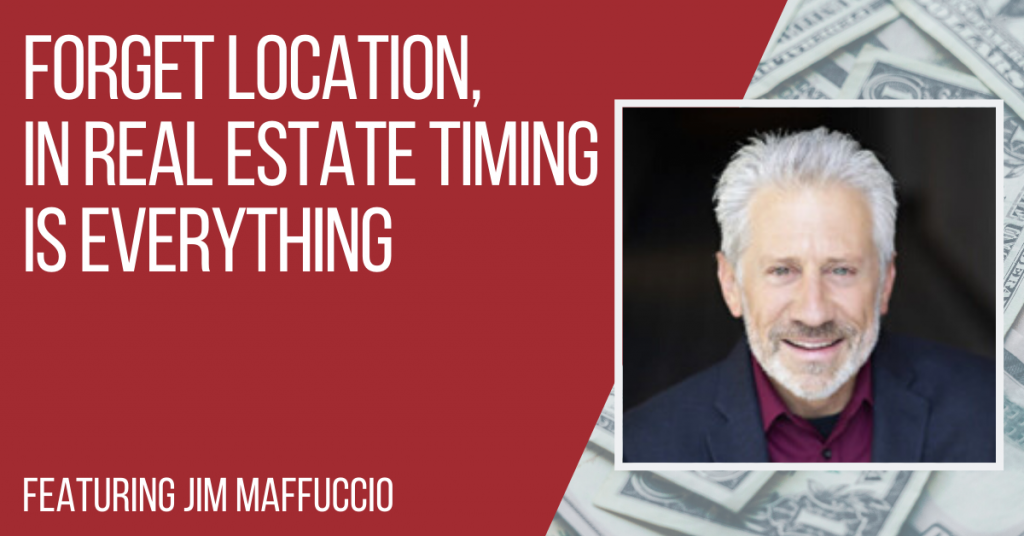 Jim Maffuccio (Ma fuchi oh) has enjoyed a long and successful career in real estate and has some battle scars to prove it. Today, as Founder and Principal of Aspen Funds, he’s drawing on his over 30 years of real estate experience in a way that many haven’t discovered. Jim has become an expert on mortgage notes and is helping investors earn high yields every month without the built-in volatility of traditional investment options.

“If you launch off on a cockeyed idea that you haven’t gotten counsel from others, haven’t done your homework and the timing is bad, you can persist all you want but I’m sorry, it’s not going to work.”

Jim was sitting at his kitchen table in Ventura, still working for a big oil company that gave him job security and a huge salary. He had just got his real estate license and started putting together deals for a couple of friends. He did some real quick math and said, “Man, I’m gonna make more money on these two real estate deals when they close than I’m making in a quarter of a year working.”

Too fast too soon

Without any more research or experience, Jim pulled the ripcord and bailed out the corporation. Within a week, both of those deals went south. He made nothing, and now he was jobless.

Not one to give up easily

Jim found another way to get a few more deals in his pipeline. He started doing transactional real estate helping buyers and sellers find and sell their homes. He hooked up with a friend who had some experience in real estate. They decided to delve into land development.

The timing was just right

They started subdividing some land, did their first home project, and hit the 1988/89 cycle right. The prices were going up and they ended up doing well with that first project. Full of vigor, they went out and acquired a bunch of other lands and started their next projects.

Forgot to keep up with the current affairs

Jim and his partner were so excited about their success that they forgot to keep up with current affairs. The S&L crisis hit them unawares. They had bought all this land, and just as the market had gone up pretty rapidly, now it was turning a corner pretty fast.

Time wasn’t on their side anymore

The problem with a development project is that it takes a long time to get your approvals, and you don’t have any control over that timeline.

Jim and his partner were raising money pulling the land together, putting all the pieces together, designing the project, hiring architects and land planners, and working hard to present their product to a market that they didn’t even know if it would exist by the time they were finished.

They had to redesign the project to an affordable housing situation. They broke ground in their project in 1994 just after the recession. It was terrible timing for them. They had this beautiful, wonderful little development of homes but couldn’t help but watch the ship go down. The other production builders that had much deeper pockets came in and slashed their prices by $40,000 a house.

Jim and his partner couldn’t make money at that rate, so they ended up closing up shop. He lost everything including investors’ money, time and some friendships.

Jim and his partner decided to jump back in the ring and try to fight the battle again. This time around, they aimed at affordable housing. They leveraged up again and got tons of land and had projects going in Southern California.

Then the subprime crisis hit in 2008, but they kept going. This time the crisis sunk them twice as deep and it went down as Jim’s worst investment ever. He lost everything and found himself bankrupt in 2009. He had just moved to the Midwest, had five teenagers living at home and was in his mid-50s.

He finally decided to play it smart, which resulted in Aspen Funds, which now has a seven-year successful track record. The company is very well risk-averse.

Consider the economics of real estate

Jim’s company is now focused on buying residential real estate. Instead of selling, Jim prefers renting because it provides a more stable income. For the most part, rents are going to keep up with inflation, at least.

Build a scalable operation with time

Jim loves plotting steadily and then build a scalable operation rather than trying to swing for the fences and do a deal. He doesn’t just do deals anymore. Now, with a company, he has an ongoing business model that he’s scaling and building.

When buying real estate, buy into diversified markets. In markets where you know, there are jobs in a multi-faceted economy, not just jobs in one sector. A market where there is a high quality of living, where the politics are good, and it’s business-friendly. So you have families and companies wanting to move there.

A diversified market then becomes your collateral, and that’s what protects your investment.

Most times, people get too excited about an idea that they think will make them quick money, or maybe they’re not experienced, and they forget to look at the bigger picture.

Take action and persist in a decent direction for as long as possible. You’re going to break through at some point, and you’re going to begin to see the fruit of your labor.

Jim’s goal for the next 12 months is to scale his business. The company is revising its systems and processes as well as making a few staff changes to reorienting and fine-tune the machinery so that it can grow. Jim wants the company to triple in size over the next 12 months.

“Just keep going. Find the thing you want to do that makes you resonate on the inside. Get some good counsel around you and then just apply the energy to it, and you’ll find your breakthrough, hopefully before you hit 60 years old.”