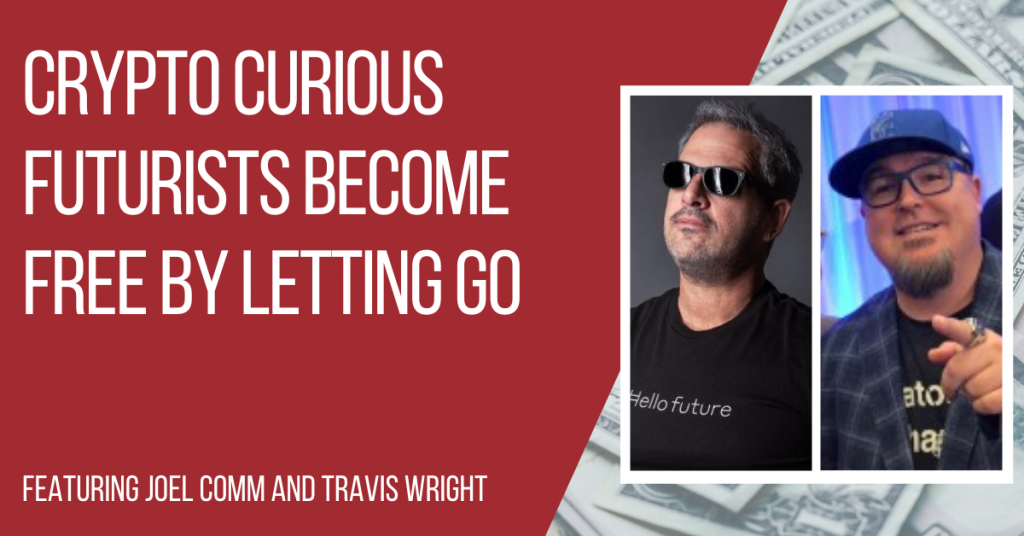 With over two decades of experience harnessing the power of the web, publishing, social media and mobile applications to expand reach and engage in active relationship marketing, Joel is a sought-after public speaker who leaves his audiences inspired, entertained, and armed with strategic tools to create highly effective new media campaigns.

These two gentlemen are the hosts of the podcast Crypto Curious and Crypto Serious.

“The current paper currency model is going to go away. A big shift is going to happen. The paper money system is going to crumble.”

2009 was a good year for Joel. He had a staff of about 38 people running several successful projects. The money was flowing, the business was good. So together with his team, Joel came up with one of the first pieces of technology that would bring email marketing type of delivery to mobile.

Think of Constant Contact and AWeber, where you can send bulk emails to people that have subscribed to your list. They came up with technology that would allow you to do that to mobile phones.

Joel put a lot into this project spending somewhere in the low six figures of his money. They did everything they could to promote the system. They showed up at trade shows and demonstrated it, but people didn’t respond. He tried to raise venture capital to grow it but didn’t get the response that he wanted. He even tried looking for partnerships, but no one was interested.

Meanwhile, every month, he was pouring more money into it because once you set up shortcodes with the mobile services, you have to pay monthly to maintain them. Otherwise, you lose them.

Joel realized soon enough that what seemed like an opportunity and a cool idea had hit a wall. He then tried to sell the software that he had invested a lot of money into to somebody who could pick it up and run with it. But that too didn’t happen. So now he was left with a failed project, emotionally bruised, and six figures less. But he still held onto the system.

The failure to successfully launch his system was hanging on him and crushing him. One day in 2013, he saw the bill for what it cost him to keep this thing running and was faced with the challenge of what to do. Does he keep paying for this, hoping he could salvage it and get something out of it and turn it around? Or does he pull the plug and flush the whole thing down the drain?

Joel pulled the plug and thought that he would feel these waves of crushing defeat because he had made the worst investment of his life, and that loss had cost him a lot. But he experienced something different. When he pulled the plug, he felt this release like the burden was just instantly lifted. Now he could focus his attention and energy on things that he was far more passionate about. Letting go allowed him to put this failure in the past.

Don’t do it just for the money

If you’re not passionate about something and planning to go all-in, then don’t do it. Money should not be your only motivator. Life is just so much more than how much money we make. It’s also about the people in our lives and the experiences we have and share.

Don’t let the sunk cost fallacy make you stay in a bad investment. Once we’ve invested a lot of money in something, we can be emotionally invested in it. But just because we invested money in it doesn’t mean that it was the right thing and that we should hold on to it forever.

You can instantly stop failing by letting go of that investment that is not bringing you any more value.

Joel wants to stay open in 2020, live every day, and let the year surprise him.

Wetting his feet into digital currency

In July of 2010, Travis read an article on Slashdot, a big tech publication that talked about this new Bitcoin 0.3 version that had just come into the digital currency space. What fascinated him was that he could find the new Bitcoin on his computer. So he decided to check it out.

He mined a block of 50 Bitcoin. Then he went to a website where they were giving away Bitcoin every day and got five Bitcoins, so now he had 55 Bitcoins.

Too much for his computer

Mining the Bitcoins was causing too much stress on his computer. Eventually, his computer got fried. Fortunately, he was able to log in and get all his important files except his Bitcoin. So he ended up throwing the computer. So now there’s a computer somewhere in a dumpster with 55 Bitcoin on it.

Lack of knowledge is what cost him

At the time, Travis didn’t know anything about cryptocurrency trading. He didn’t have anybody who he could talk to about this new fad. Someone who had blockchain and understood Bitcoin and cryptocurrencies.

He’d jump right into the new fad without doing any research. Had he done his homework first, he’d have known about buying Satoshis and putting them in a crypto wallet instead of on his computer.

In January of 2018, the 55 Bitcoins, that were now in a dumpster somewhere, were worth a whopping $1.1 million! Yep, Travis had literally thrown $1.1 million into the trash bin. His ignorance had cost him $1.1 million.

Keep your private keys to yourself

When investing in crypto, make sure to store your crypto, not on your computer, but a hard crypto wallet without an internet connection. Keep all that stuff secure and private. That way, nobody can steal your stuff, and you have easy access to them.

The market will get crazy

When the markets are high, and the crypto prices are really good, sell some of your Bitcoins, take a little bit of the profits off the top and spend it on other investments because the market will sometimes dip. So don’t just watch all your investments plummet down to near zero when the markets dip, make money during high markets.

You’ve got to take it to the end

Great investments have to work to the end. It’s a little bit like playing basketball and you’re good at dribbling and you’re in the back of the court. But if you can’t take it to the hoop to get the point, then all that work is useless.

Don’t be afraid to use your crypto once in a while. Don’t just hold it as an investment. Remember to do your research and your due diligence into it and start to understand the best cryptocurrency, what is blockchain, and why blockchain works.

“We’re all human, flawed and fallible.”