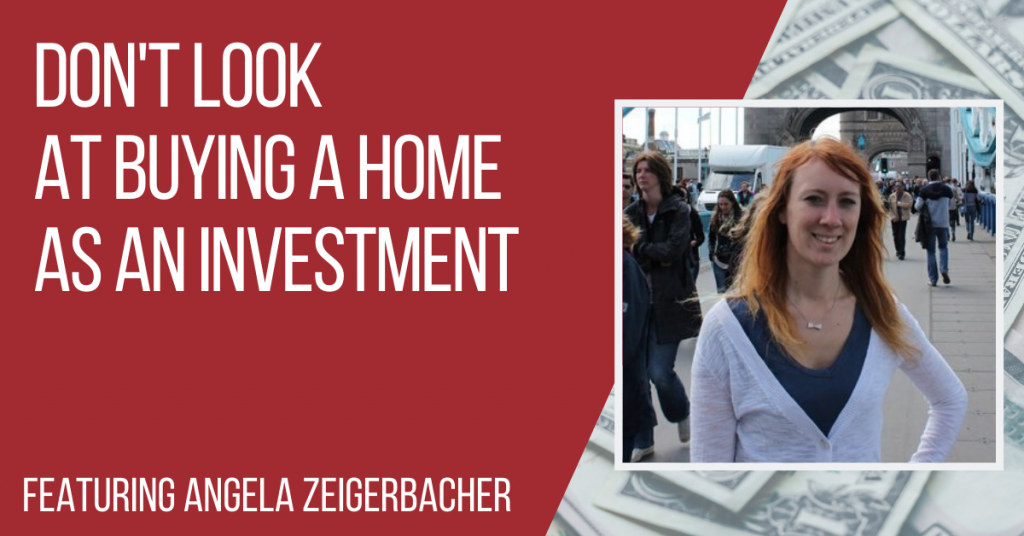 Angela Zeigerbacher has always been interested in the personal finance realm, from hoarding cash in her sock drawer as a kid to paying off her student loan debt in one year after college. After countless conversations with friends, she realized not everyone had the same level of personal finance education, which prompted her to launch the Money in the Bank podcast, a personal finance podcast for the average Joe or Jane.

On top of this, Angela has taught personal finance to teenagers in high school as well as hosted “lunch and learn” at several companies. She recently started a food channel on YouTube, Foogality, where she cooks and bakes frugal type of meals.

“Things can always break when you buy a house. So going in without a maintenance fund is a really bad idea.”

Interestingly, nobody talks about what you should do once you pay off your debt, especially to young people. So after working so hard to pay off her debt, she didn’t know what to do now that she was debt-free.

All her friends advised her to treat herself, go on nice vacations, and buy things she wanted. Angela had never really been a spendthrift. So she didn’t take the advice completely to heart, but she started thinking about it.

Desire to live the American dream

Everyone kept telling her to buy a house, so she figured the American dream sounded good. It would be nice to have a house and have a boyfriend, two cars in the garage, and a white picket fence.

Her American dream started with a new car. She didn’t put much thought behind it. She just went to the dealership and picked a car that she thought was good for her; a brand new Ford Escape for $35,000.

Next on her American dream list was a house. After buying the car, her lease came up for renewal. At the time, she was living with her boyfriend and they decided that renting was just throwing away money, especially now that the lease was going to increase by $250 a month. So they decided that buying a house was the right thing to do.

Again no thought was given to this decision as she was just too excited to get something she wanted and could afford.

Even though they went for a house, they could easily pay for, one huge factor, prompted by the hasty decision making, was ignored. They never factored in the closing costs which was about 3% of the buying price.

Now they were draining their emergency funds and savings accounts scraping this money together to fulfill their dream of buying a home.

Now we hate the house

The couple bought a house that they could afford, but they didn’t spend enough time looking and ended up just quick buying the first house they saw.

After living there for just a year, they hated it. There was no insulation in the bedroom, so it was freezing in the winter. Their bills were super high. They went from paying about $50 a month in an apartment for heating and cooling to about $200 a month.

Another thing that they forgot to factor in was property taxes, and they can be quite expensive. They were paying about $350 a month in property taxes, as well as a Private Mortgage Insurance (PMI) of about $100 per month as well.

In hindsight, even though Angela thought renting was throwing all this money out the window, they could have rented a two-bedroom, which would have been more than enough for their needs at the time, for probably about $875 a month.

Buying a house ended up being Angela’s worst investment ever. Even though she made about $19,000 worth of principal, it still cost her in total $30,000 because closing costs on both ends were high. She also had to sell her car as she had moved closer to work. Cumulatively, her American dream cost her about $50,000.

Never listen to what others or society think that your life should look like. Having that car and having that house makes you look very successful when you’re 22 years old. But ultimately, from an investment perspective, that isn’t what’s best for you. You are better off using that money to invest in other things that have a return on investment.

Buying a house is not necessarily a good investment

When it comes to buying rental property versus buying a home, one is an investment, and one is not. Most first time homebuyers tend to think that buying a home is an investment but it’s not. Some people have had major luck with the buy and hold model on their homes, but that is like winning the lottery.

Think of your house as a home, your place to live in. A house has no liquidity like a savings account. That’s why you accept a lower return on a savings account as your money is very liquid, you can get your hands on it if you need to, but you can’t with home equity.

Always do your research

Before you put the down payment on a house, do your research. Find a comparable house that’s for sale, and try to compare the two. By doing so, you force yourself to ask all the questions necessary to make the right decision.

Your parents know all about buying a house, hear them out

Listen to your parents when it comes to buying a house. They’re likely to know all the expenses and all the trouble that comes with the purchase.

Keeping up with the Joneses

You don’t need to chase the American dream just because everyone else is doing so. Don’t follow other people’s dreams. Just because others are doing something, it doesn’t mean they are making the right decisions. Be brave, be willing to stand on your own.

Don’t rush big financial decisions. Take your time, think about it, do your research, do your homework, and make sure you’re excited about what you’re doing. Ask for more opinions from people around you.

Angela’s goal for the next 12 months is to focus on her YouTube channel and pick up some more editing skills, so her videos get better. She also wants to work on releasing a frugally minded cookbook and the next year.

“Don’t let sunk cost fallacy keep you in a bad situation. It was hard to sell my car after so much depreciation but it was far much better than holding onto a mistake.”