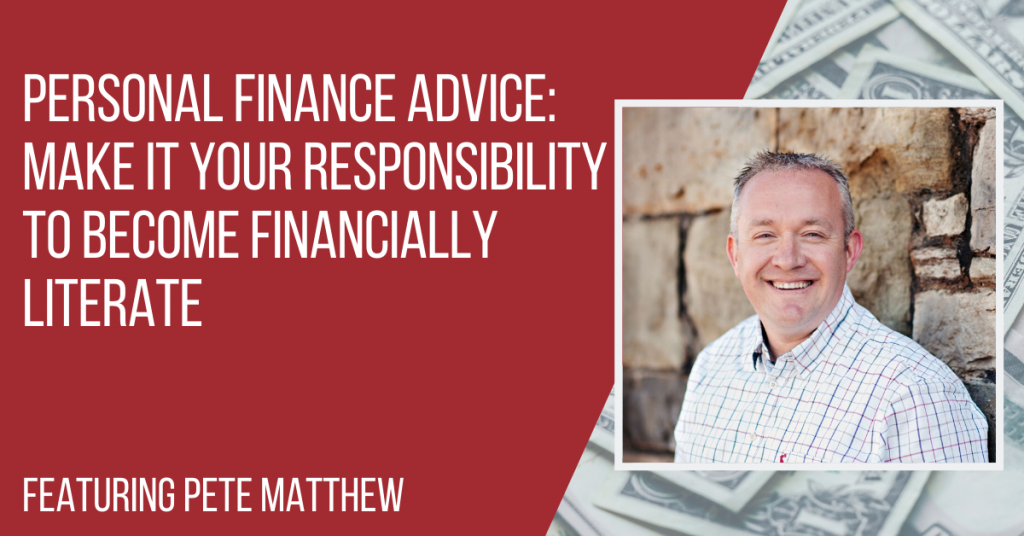 Pete Matthew is a 21-year veteran financial planner, based in Penzance in the far southwest of the UK. In 2010, he began shooting a series of short videos explaining how money works in simple everyday language. This hobby became Meaningful Money, which is now UK’s biggest independent personal finance podcast with over 3 million downloads, a YouTube channel, a book deal and an online Academy teaching people how to beat debt and build wealth.

Pete is also the Managing Director of Jackson’s Wealth Management, which can trace its roots back nearly 100 years in Penzance. He’s married and has two daughters age 19 and 16. And a Jack Russell Terrier called Maisie.

“We should be intentional with our finances because nothing good happens by mistake. Anything good takes work and intention”

Pete grew up in a home where money was an absolute taboo subject. His parents, like many others of their time, didn’t know how to talk to him about money. So he grew up with zero financial training. And thus he never knew how to engage with money, well not until he met his fiancé.

Pete came to learn how to manage his finances in the most embarrassing way. One weekend, he was heading for a weekend getaway with his fiancé, and his brother and his wife. During the car ride, they were talking about paying for the weekend. Pete was filled with fear because he had zero money. He was worse than zero. He had overdrawn his overdraft.

He had no choice but to admit to his fiancé that he had no money and there was no way that he would be able to pay for the weekend. The embarrassing part was that they were driving in her car that she had saved for because she had all the financial discipline that he didn’t.

Right there and then Pete had a life-defining moment where he thought he might lose his fiancé over this because how could she marry such a mess? He had student loans, but no degree to show for it and an overdraft with the bank. Fortunately, she stuck with him and she paid for the weekend, and he eventually paid her back.

Money lessons from his fiancé

His fiancé and that vulnerable moment taught him a great deal about how to manage personal finances as well as day-to-day expenditures. He realized that his worst investment ever was a complete lack of investment in his ability to cope with day-to-day finances.

When it comes to financial planning we are our own worst enemies. Many times we tell ourselves incredible lies that lead to self-sabotage. We tell ourselves that we can’t do anything about the financial mess we are in and we believe it. So instead of learning about personal finances, we continue being passive about it.

Practice automatic bills payment with a two account approach. It’s very simple. You get paid into one account and process all your bills from that account every month through direct debit or standing order. This ensures that you never get surprised by a bill.

Most people hate finance, and that’s ok but, don’t keep saying that to yourself because if you do it will cause self-sabotage. Take a moment, stop and let that go. Find a way to start loving finance.

Personal finance doesn’t have to be complicated and overwhelming

Learning about finances and managing your money can be very simple these days compared to a few years back. So go out and learn how to do it and start doing it.

Educate yourself, learn about personal finances and don’t accept ignorance. The financial services industry may make it look so complicated that you think you need an expert to train you. But take it from an expert, anybody can do it on their own.

Personal financial planning comes down to three things. One, spend less than you earn. This is the bedrock of it all. Two, insure against disaster because there are some things you can’t control. Three, invest wisely. It doesn’t need to be complicated. So find a way that works for you and do it a step at a time.

Pete’s number one my goal for the next 12 months is to lose some weight. This has been a bit of a perennial goal for him but he now feels like he is in a good place for that. He intends to practice the same discipline he applies in his financial planning to achieve this goal.

“Stay strong, stay the course, it’s worth it. Get other people involved, learn from others. Don’t be a lone wolf.”