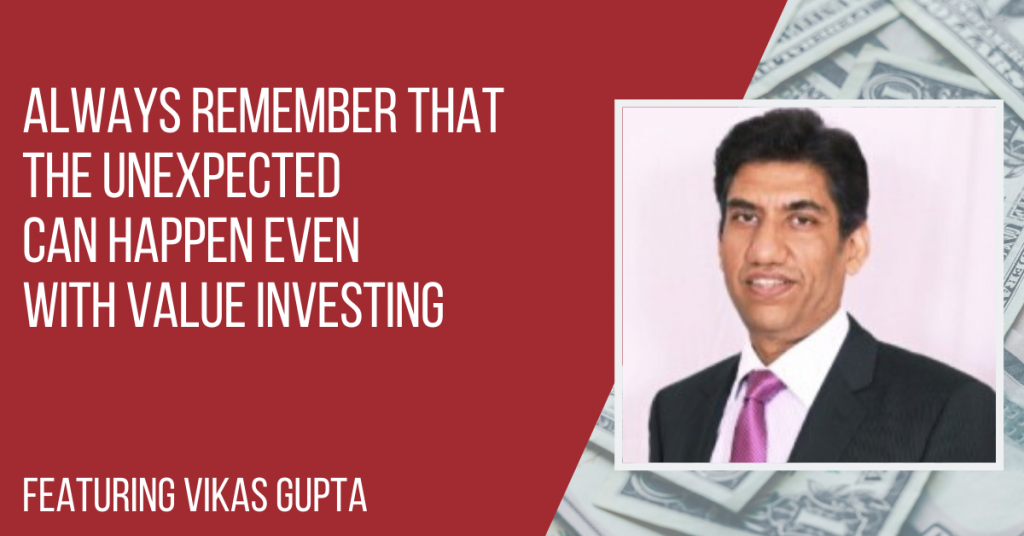 Vikas Gupta founded OmniScience Capital to provide a scientific approach to global and India-listed equity investments. Together with his team, he formulated the Proprietary Scientific Investing Framework which stands on the strong foundations of nearly 100 years of investment research and practice.

While his exposure to the capital market can be traced back to the 1990s. He has a long track record of investing since 2003 onwards, based on the value investing philosophy developed by Benjamin Graham and Warren Buffett. The practical experience of investing over the various ups and downs of the markets was supplemented by a relentless thirst for learning from other investment greats. Scientific investing is the result of this trial by fire over the decades.

Vikas has earlier incubated the global equities vertical at ArthVeda Capital, which won international awards and rankings. Besides, he successfully obtained a US SEC license for the firm with a vision of operating in the US markets. He led advanced discussions and/or inked agreements with leading stock exchanges, asset management firms and research firms across the globe, including from the US and Europe.

He has a B.Tech from the Indian Institute of Technology (IIT) Bombay and has earned his Masters and Doctorate from an Ivy League University—Columbia University, New York.

“Listen to everyone, even the greats, but make up your mind on your own.”

Vikas started his investment journey by following the ways of some of the top investment maestros such as Warren Buffett, Benjamin Graham, Franklin Templeton, Peter Lynch, Philip Arthur Fisher, among others.

By doing so, he was exposed to different investment philosophies, including value investing, investing in monopolies, concentrated focus investing, diversification and so on. But what attracted him the most was looking for monopolistic growth companies.

Vikas decided that he was going to have a 10 stock portfolio and so he went out looking for stocks worth investing in. He would find what was the best stock and then allocate 10%. This is when he landed on his worst investment.

The company ticked off all the right boxes for the perfect investment. One of the few English speaking media companies in India, in a highly concentrated region and with a huge expansion possibility in the neighboring states, high returns on capital and had all the indicators of a strong monopoly. No doubt, it was one of the best value stocks available.

Not so perfect after all

The red flags started when the next annual report was not available. Vikas, however, was optimistic and so he waited it out. Finally, several months down the line after regulators came in and forced the company to file a balance sheet, a report was released. It was then that Vikas and other investors found out that the huge cash-rich company was saddled with a billion dollars of debt.

The company had used its assets and many other assets, which were not even part of the company to borrow from top-class lenders, public sector banks, private sector banks, and non-banking financial institutions. They even securitized the same assets twice or thrice to different lenders. The shares were pledged to various lenders. It was a total disaster that suddenly left shareholders loaded with as much debt as the valuation of the company leaving them at nil of what they invested. So Vikas lost everything he had invested in this stock.

Things can go wrong even with the best value stocks

You can do all your due diligence, all the analysis, all the evaluation. But, ultimately you are at the mercy of the management. Something could go wrong even in the most perfect investment. It could be something internal, could be something which a competitor does, could be a disruption, you never know.

Do not have a highly concentrated portfolio

Always diversify your stock portfolio to between 20 and 30 stocks because your perfect investment could still go to zero. And be prepared to lose 100% of your capital in some part of your portfolio.

Life goes wrong all the time

You can never completely prevent something from going wrong no matter how much work you put in, that’s just the reality of life. Life goes wrong all the time, even though we think we’re able to control it.

So, to prepare for that, make sure you don’t have too much riding on any one investment even if it’s doing well because you never know, it could go wrong.

Never take literally what others are saying, particularly when it comes to investing. It’s a very emotional topic, and you never know the truth behind what people are saying. Some people are too emotional and not honest about their experience, so they mislead you with half-truths.

If you have $100 put $90 in an ETF then put the $10 balance in 10 positions, $1 each. This allows you to first understand what’s going on. So start with 10 stocks but allocate only a very tiny portion to that so that you don’t lose all your money.

Vikas’ goal is to get his portfolio stabilized and make sure everything is performing right.

“Keep going back to the Intelligent Investor by Benjamin Graham.”