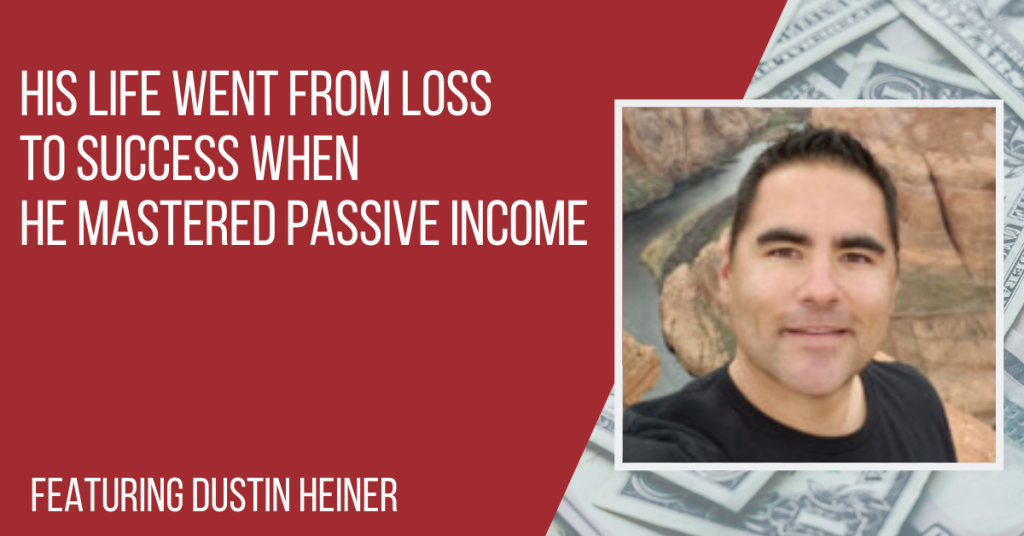 Dustin Heiner is the founder of MasterPassiveIncome.com and the host of the Master Passive Income Podcast. Dustin is a real estate rental property investor, who was able to make enough passive income from his business to quit his job when he was 37 years old. With his podcast, books, courses, and coaching, he now helps other people quit their job by investing in real estate rental properties to live the dream life. Now, Dustin is living his dream life alongside his wife and four kids while traveling and exploring the world.

Before becoming a master of passive income, Dustin Heiner worked as a government employee for years. As he was going about his daily grind, he received a phone call from his boss who summoned him to her office.

At that very moment, Dustin thought of all the worst-case scenarios. While he was walking to his boss’s office, he could not shake the bad feeling that he would lose his job that day since rumors had it that the department had been cutting people off.

He was given a two-week notice

Then came the blow when his boss confirmed that he had been laid off. Losing a job while trying to provide for your family is a scary thing. But Dustin had to do something.

First things first, he had to get a new job quickly. Good thing is, he’s got good connections from his previous jobs and luckily, he got hired a week after losing his job. One word sums up everything he was talking about – network.

Planning for some backup

Dustin learned his lesson and started to think forward. Being just an employee would not work for him and he needed a way out from his job. His back-up plan–investments. So, he started investing in stocks but turned out, he was losing far more money from it. He then stumbled on real estate which taught him great lessons.

Location-based businesses are not for everybody

Not all beginnings are great, and Dustin could attest to that when he invested in a retail establishment in 2007. It was a combination of a convenience store and a pizzeria, a market that is heavily dependent on the people around the area which is very promising. And the results for the first 2 years were great.

However, the economy crashed and the working population in that area was greatly affected. Consequently, Dustin’s retail business also suffered. So, what began as a good investment, turned out to be his wake-up call.

Invest your time and money efficiently

Spend your life doing the things that are going to benefit you more than just a job. When you know what those things are, study and master it. The results will surprise you.

Get an investment that works for you

Dustin cannot stress this enough that you need to create a business that does not need you. Let the business do the work for you. Therefore it is very important to learn and master passive income.

Know and control your expenses

Easy to say but hard to learn. There is no hard and fast rule on how you successfully control your expenses. It is important however to find the best way possible to at least minimize the costs.

For Dustin, he loves real estate and has formed a formula on how to handle his expenses effectively. However, controlling your expenses is as important–if not more–as knowing your expenses. Being able to spot them head-on would save you a lot of time and money.

Do not forget your exit strategies

Diving into a business venture is one thing and planning the best exit strategy is another. Dustin did not know about strategies when he started but somehow, he stumbled into it. He never starts anything without his exit strategies. It may not be necessarily exercised, but at least, it will prepare him.

When someone asks you, “what do you do?”, Dustin teaches us how to answer it. You don’t say, you’re an author or a real estate person, you say you are an investor. And what it conveys is that you are an investor of your money and time.

Another key investment strategy is allocating resources. This way, it makes you think differently and start to do things differently as well. Don’t put your time and effort on things that will only pay you one time. See what passive income is, and master it.

Get yourself out of the employee mindset

The key to changing that mindset is to just simply think differently. You are not an employee because you are an investor. Never think otherwise. So, when asked, “what do you do?”, answer it with confidence that you are an investor and that being an employee is your side thing. If you embody it, things will be better.

Don’t put your time into activities that only pay you once. Dustin explains that passive income—and why he has his Master Passive Income courses–is where he works one time and gets paid over and repeatedly.

To create a brand called Successfully Unemployed”. He’s ready to impart knowledge through a podcast where other people just like himself who are successful from being unemployed can share their stories and inspire others.

“Learn. Learn everything. And apply everything that you have learned wisely.”