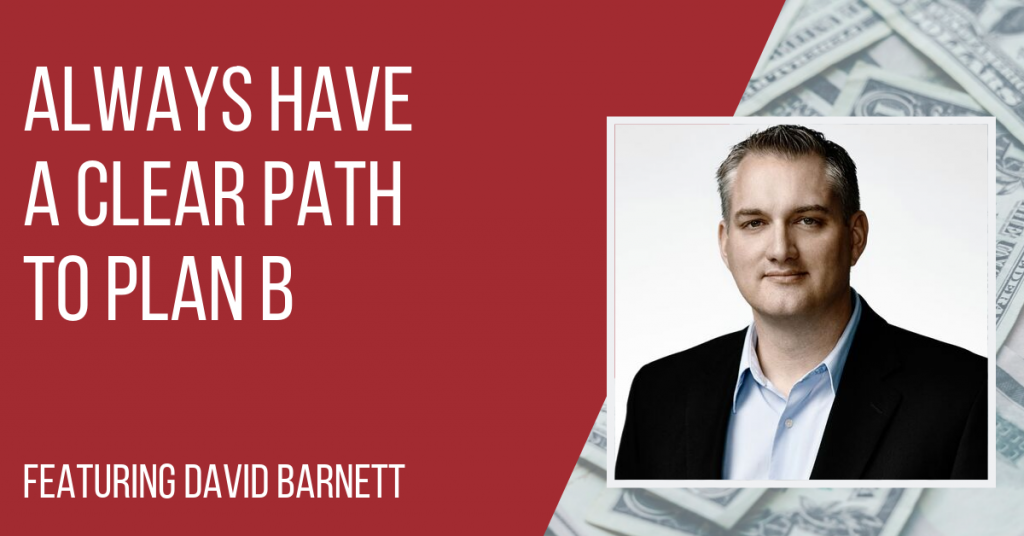 David Barnett is a three-time best-selling author, consultant and business coach who has been working with small-business owners for more than 20 years. For the past 10 years, he has been helping people buy and sell businesses. David works directly with clients and produces online education products to teach aspects of small-business purchase and sale transactions and local investing.

“(As one progresses in doing business) The deals keep getting bigger and we need these little ones to teach us to not make mistakes when we get into the big ones.”

Background on value-added taxes in Canada

David was approached by an entrepreneur he knew quite well who had run several businesses. The latter was building a new business. In Canada, they have a value-added tax called the HST. When a business buys goods it pays HST, when it sells goods or services, it collects the HST, and the business then sends the difference to the government. So when building a business, the founders have to lay out all kinds of money. All of the contractors and suppliers are charging new tax, but the founder has yet to make a sale. So the business pays out money in taxes, and it is not returning. Usually when a new businesses is founded it gets a check from the government because when it files a tax return, it has overpaid sales taxes versus what it has collected. David had been through this many times.

In the first filing for a business, the business should get a check back from the government. After that, if it is doing well, it sends money to the government. David’s partner started to run short of cash in building the business because there were unexpected events and extra expenses. He offered to sell David and his investor group his HST return at a discount. So the idea was that the group would give the partner an advance and then, within three months, this money would come back to the group because the return would come in and the group would be paid. So the group proceeded.

David then started to learn more about how the government processes HST. It turned out that when the figure is high enough, the government do not blindly issue checks, it looks at the company more closely. So a few months went by and the government wanted the partner to submit some of those bigger invoices. So he did and when it found out the nature of his business, that there was a lot of cash involved, it required him to do anti-money-laundering training, so the partner would become aware of current rules and laws. By this time, it was month five, and because there was so much cash in the business, he had to go through the training. So the group had gone from the business being built and all the money was going out to active operations. But the government withheld the money due to the business because it wanted the partner to send in more information. It wouldn’t release the funds because he had to do the training.

Business had failed to send in payroll tax, which killed the investment’s chances

Sadly, the business’ sales failed to come in as fast as was forecast, and another problem was that the partner had failed to send in source deductions – there were no income tax deducted from employee pay checks. By the time month six had come along, and the tax office was ready to return the HST, it didn’t, because it did some final checks and found that the business actually owed the tax office money.

David had not been entirely comfortable about doing the deal. So he had invited two friends to join him to form the investor group. Now he had to face them and give them the news about all these problems that had been dragging on, and of course about the loss of the $25,000 they had put in. He admits he felt quite stupid in front of his friends and for the fact he got involved in the first place. He had failed to make himself fully aware of all the potential hazards that could have come about by doing this kind of thing. After two years though, he and the group were all able to write off the loss as it had become an allowable business investment loss. So they were able to offset some other gains with it. But he still feels embarrassed also that he had been a person who had written a book on how to successfully invest in small local businesses. It was a hard story to tell and one had not been ready to share until this occasion.

“There always has to be a clear path to a Plan B … some kind of security or collateral against something (your investment or deal) … even if it’s a guarantee from some person or entity or other business that you think would eventually have the ability to pay.”

Plan A: Make the most attractive thing possible, which is the repayment of your money

If it doesn’t work for whatever reason (and because we’re dealing with humans, anything can happen: illness, marriage breakdowns, all those kinds of things) … have a Plan B.

Plan B: Some other path to take if Plan A goes wrong

Follow your own counsel. In one of David’s books he tells how people can do local investing deals by learning how banks do them, which is, banks have a Plan B, they get collateral, they get security, they ensure that if something doesn’t work out, there’s a Plan B to follow. And that was one of the key critical things that David admits failing to have set up.

Government has extreme power and can literally do whatever it wants. It can cancel a deal, it can refuse to pay, it can demand more payments or fees. Dealing with anything linked to governments is messy, both in the West and in Asia.

If you don’t have rights over the benefit you’re seeking then it’s very hard to win.

That can be some kind of security or collateral against the deal you are doing, even if it’s a guarantee from some person or entity or other business that you think would eventually have the ability to pay.

David is focusing most on his everyday work with people who want to buy and sell small businesses. He has an online group coaching program where people from all around the world (Asia, Australia, New Zealand, Canada and in the US) collaborate. He works with them to help them prospect, find, locate, make offers, make deals, do the due diligence, on buying small- and medium-sized businesses. The group’s been going for about a year and a half and it continues to grow. It’s very exciting for David because people can spend a lot of time looking online for information about buying a business but every one of the deals is done privately, so it’s very rare that you’re ever going to get somebody to tell you the exact details of what happened when they bought or sold a business because it’s all confidential.

“If you want to avoid all risks … you know, just stay home and don’t do anything and don’t go anywhere.”

David says, if you want to avoid all risks just stay home and don’t do anything and don’t go anywhere.

But he doesn’t think that’s what life is all about. He admits losing money in the deal, but he now sees it as a piece of the $25,000 that’s going to help save him from losing the piece of the $100,000 because as one progresses in doing business, the deals keep getting bigger and we need these little ones to teach us to not make mistakes when we get into the big ones.