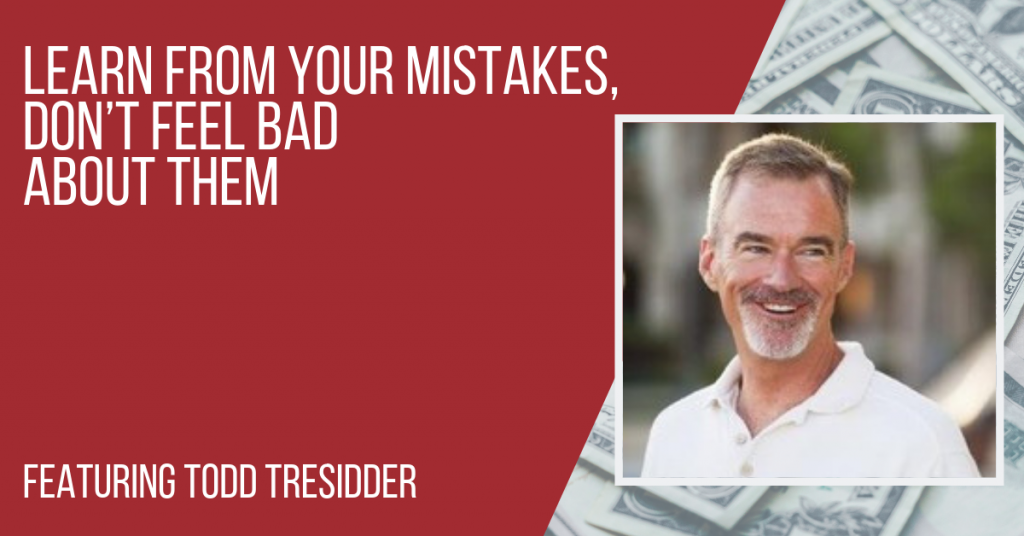 Todd Tresidder is the author of seven personal finance books with an eighth coming out shortly. He created a course on strategic wealth planning and is the founder of FinancialMentor.com, a popular personal finance site. He is a self-made millionaire and was financially independent at age 35, which was more than two decades ago. Since then he’s been coaching clients on how to do the same giving him an unusual depth of experience.

Todd has maintained his wealth by remaining an active investor and utilizing statistical and mathematical risk-management systems for investing. At FinancialMentor.com he teaches advanced investing and advanced retirement planning principles. Take the next step beyond conventional financial advice and discover what works, what doesn’t, and why, based on years of proven experience.

“So he had all kinds of great stories about how this company was going to the moon and he didn’t understand the setback but this company was going to fly and I was a stupid kid and I bought it hook line and sinker and I put even more money into it. So I made this stupid mistake of averaging down on a loss you know chasing good money after bad and eventually went to zero, and I lost everything.”

Todd made his first and worst investment when he fresh out of college. Holding a fine résumé for a new graduate, he had been the manager for campus businesses. It was the mid-1990s and he had read the book In Search of Excellence by Tom Peters. He went straight from college to work for HP, one of the top employer companies at the time, and had a friend in the credit department. One day during a lunch-time chat, his friend told him about a new company they were working with that was buying HP mainframes. It was listed in the Nasdaq pink sheets. Todd’s friend had put his money in the company’s stock after doing financial analysis on the company.

‘Inside scoop’ spurred him to invest all his MBA savings

So Todd felt this was a “cool insider scoop” on this “amazing emerging company”. The company had an algorithm that was dominating how mail was going to be sent. Todd said “it sounds so absurd now, but it sounded cool at the time”. He had been busily saving for tuition fees to study for an MBA after paying his own way through school, and was still trying to pay off his college bill. He was also saving some money but chose instead to stick his savings into the hot tip. Initially, it went up. But he neither knew anything about how new stock issues work or about how this business worked. So he also had no idea that it was standard protocol for new issues to be promoted in an over-the-top way to get people excited about the stock, that it was “going to the moon”, in order to create demand. Todd was in early enough to see an initial rise in the stock, and he kept pumping more money into it. The more he had, the more he would invest, thinking this investment was going to pay for his further study.

Stock price turned but broker talked him out of selling

He then watched his investment fall to zero

Todd bought the broker’s story and put more money in. He made “this stupid mistake” of averaging down on a loss, chasing good money after bad and eventually it went to zero, leaving him with nothing of his original investment. That was Todd’s first and worst investment ever. So for his very first investment he lost everything. But it did set him on a course to learn everything about how to stop it happening again.

“It was only in hindsight, as I started to learn (about finance and investing), that I realized the depth and the level of all the different mistakes I was making.”

If you think about it, you are actually buying a business, so if you are going to buy based on any sort of fundamentals, it better be business fundamentals.

You must must have risk management plan in place

This must include an exit strategy.

Don’t play a game that you don’t fully understand

Todd was in the new-issue market, which is a very specialized game. There are rules by which that game is played by and he admits violating them all “with pure stupidity”, because he did not know the game.

Which is he says is what many people are doing right now.

Don’t ever buy based on news

Don’t send good money after bad by averaging down

Don’t let a win turn into a loss

When we get excited about the opportunity of big returns, we often ignore the risks

Part of managing risk it to assess the risk of that particular company but the other part of it is managing all the other risks, and that is about the position, size, how much money you put into it, and things like that.

The hardest thing for an analyst or investor is the decision of what to do when the stock goes down. When we talk about emotion in investing, the feelings involved when our stock is starting to fail is intense. Nobel Prize research highlights that the pain of loss is two-and-a-half times the excitement you feel when you’re winning. When that emotion is involved, that really is the time to have a risk management system in place. It could be a stop loss, or something else.

You must learn the game before you play

“(Risk management) It’s the first consideration in investing. I always think in terms of what I can lose and only secondarily do I consider what I can win? My focus is entirely on controlling losses.”

Focus on risk management, first and foremost. The reason for that is you can make all the other mistakes, but if you have a risk management strategy, you can still win in the long term.

“If you don’t have risk management any one mistake can bury you.”

Todd is finishing off his wealth planning course at FinancialMentor.com and he has one final module to create to complete that project. Then is will be time to build all the sales funnels and all the systems to support the site.

“It’s really not painful to talk about your losers.”

Todd said, no one is born a smart investor. As a matter of fact, we are hardwired in our DNA that opposes what we should be doing as a smart investor. That’s one of the reasons he uses quantitative disciplines to overcome the natural human emotions. Recalling mistakes and how they are made is just part of learning how to invest.