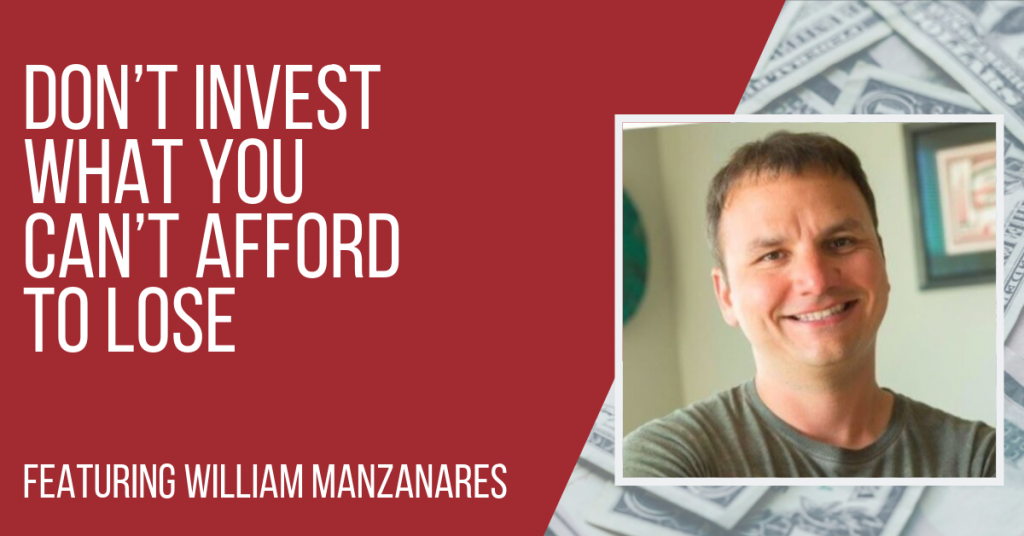 William Manzanares IV was born and raised in the Tacoma area of Washington State and is an active member of the Puyallup Tribe. He is a serial entrepreneur, having owned and operated successful smoke shops, convenience stores, and restaurants since 2005. William is passionate about helping small business owners as well as struggling readers.

To that end he has written I Can’t Read: A Guide to Success Through Failure, telling the story about being unable to read as a youth and struggling with dyslexia, William hopes his new book will equip kids to improve their literacy and inspire them to pursue their dreams. He spends much of his time speaking with students about career planning and goal setting.

“I was excited. He offered high returns … and an equity stake in everything in the business. He talked a big game of how he was publicized everywhere and I said … ‘Okay, let’s do this’ … He did say after signing … checks that were written out in the contract, I’ll just pay you in big chunk payments. So I got like a $5,000 payment, then a $10,000 payment … that took about six months to get those and then when a final payment bounced and I think he tried to write me another $15,000 check, it just didn’t go through. This was like six or seven months after I gave him the money and I went: ‘Oh, what did I do? (What have I done?)’”

Will met the publisher of a local weekly newspaper who was also the public relations representative for his native American tribe in Tacoma because he said he could get all kinds of tickets and Will wanted to take his daughter to see the Seattle Seahawks American football team play in the Super Bowl for the second time in its history. The publisher was always around talking about his connections and that he always knew someone who could get show tickets to anything. Will let his guard down.

Invests US$60,000 in regional newspaper

The man then started talking to Will about signing up other cities for his business, that he had just signed up another city and that he needed some investment money to sign up more cities in the Pacific Northwest region. The amount sought was US$60,000 so Will loaned it to him and got a lawyer to draw up a contract for the deal. Will was excited as the publisher was offering an equity stake in the business, high returns and “he talked a big game of how he was publicized everywhere and I said … ‘Okay, let’s do this’ … He did say after signing … checks that were written out in the contract, ‘I’ll just pay you big chunk payments’. So I got like a $5,000 payment, then a $10,000 payment … that took about six months to get those and then when a final payment bounced and I think he tried to write me another $15,000 check, it just didn’t go through. This was like six or seven months after I gave him the money and I went: ‘Oh, what did I do? (What have I done?).”

Sees state of the accounts, realizes his money is gone

Will called the publisher, inherently wanting to be a nice guy, and the principal made excuses, said he was sick, blamed everyone else but himself, but in the end let polite and persistent Will into the company’s offices to consult and maybe try to save the company. Will then spent half an hour with the bookkeeper (while talking to Andrew he admits he should have done this a long time ago). After he saw the books he realized he was never going to regain his money. The principal owed printers and many other people. As PR guy for Will’s tribe, he also had been telling people including Will that the tribe owed him a lot of money. The tribe has a multimillion-dollar casino, so people thought they had the revenue.

Thinking ‘success the best revenge’, Will starts his own

So Will did what many entrepreneurs would do, and instead of getting mad, decided to get even by starting his own online publication called Grit City, after the nickname for Tacoma. What he discovered was publications in start-up phase do not make money, so essentially he was funding this new venture and in so doing, was throwing good money after bad. His CFO also told him later about sunken-cost fallacy. He had already lost so much money with the other weekly paper owner and he was sinking money into the new publication. One day he decided he could not continue, and as a gift, handed the business to his partners, and walked away, another $60,000 out of pocket. While his former partners made the publication work, Will will never make any ROI from any of the decisions he made. One small satisfaction though is that soon after he left Grit City, it was outranking the publication of the con artist he had had dealings with originally.

Do due diligence, look at company’s books and debts

If someone offers you an equity stake in a company, look at their debts, look at their books. If they are not willing to show you, then they’re not good partners and they are trying to take something from you.

Beware of con men and the ‘confidence’ they show

The nature of con artists or confidence men is that they make you believe because of the confidence they have. Don’t look at what someone’s doing for you just because they’re doing it for you. Chances are their “kindness” and “confidence” is part of a mass scheme of deception.

Due diligence is first getting access to that but monitoring is continuing to keep track of exactly what’s going on. For a lot of people that are investing in a private business, the first step must be:

Even though it’s more time, trouble and hassle, make sure you get those financial statements that will ultimately will be signed by an auditor.

Trust can only be built with time

There is no short cut to building trust between people. Only time works with building trust. Sometimes we like people when we meet them, and we think we can trust them. So when you come upon someone that gives you confidence and they’re really excited, just remember the first three letters of the word confidence – CON! That is what the expression, “con man”, comes from.

Spite is not a good investment strategy

Don’t believe when you go into an investment about the high returns, think about whether or not you can afford to lose the amount of money you are investing?

Will would like to see people who struggle with reading picking up a copy of his book, then after that, picking up more books and continuing to learn.

“I’ve made a lot of mistakes in my life with my reading struggle and one was not admitting it to the public, to anyone, for most of my life.”

It’s okay to take risk. Just make sure you’re not risking everything you have.