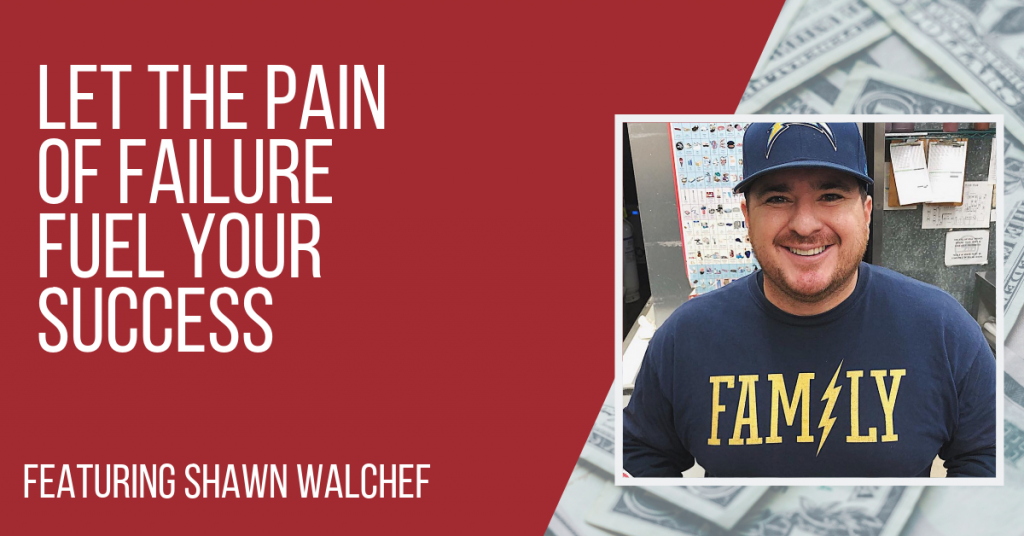 Shawn Walchef is a restaurant owner, digital entrepreneur and a proud father. Since 2008, Shawn has owned Cali Comfort BBQ in San Diego County. In order to survive, Shawn knew early on to operate his family restaurant and sports bar like a tech company. Now whether it’s his annual #BETonBBQ “Turf and Surf” tasting event in August, or his expanding catering empire in San Diego, Shawn’s many ventures all incorporate technology, especially the kind you use every day on your cell phone.

That’s how he discovered podcasting. Since Shawn first started a business and BBQ-themed podcast almost three years ago, he’s watched podcasting grow, with many shows popping up that he’s helped inspire. Shawn has played a big part in getting so many fellow BBQ business owners into podcasting. Listen today to his Behind the Smoke: BBQ War Stories podcast, in which he guides viewers and listeners through the ever-evolving world of digital marketing and this helps his fellow restaurant and business owners adapt and succeed.

Shawn will begin releasing weekly audio and video episodes in the fall of his new Digital Hospitality podcast. On the show, he and his guests will get personal and truthful about what it takes to truly thrive in business, sharing advice on social media, blogs, and digital tips and tricks. The show will also explore topics that aren’t usually discussed on a business podcast, such as health and wellness. To find episodes, educational blogs, and behind the scenes content, keep your eyes out online at CaliBBQ.Media.

“Basically, he wanted me out and he wasn’t going to pay me back. He wasn’t gonna pay me back the money, and he was going to keep the liquor licence … I had never been spoken to like that in my life. I had trusted him. My business partner, Corey, my best friend … we both had trusted him, we had put all of our hopes and our dreams into this restaurant business. But we did it in a way that we had no control.”

Shawn never knew his father, but learned a great deal from his medical doctor grandpa, who raised Shawn with the help of his grandmother and mother. From a very early age, his grandpa taught him that hard work is good, but that hard work and education would get you ahead in life. Grandpa also sent him to university in Colorado and on exchange to Alicante, Spain. During his time abroad, his grandfather asked him to return to San Diego as he had been made the trustee for grandpa’s estate as Shawn was the only person he trusted. After his grandpa retired as a medical doctor, he had started investing in real estate, and now needed help with that business so Shawn transferred to the University of San Diego. This allowed him to spend time with his grandfather, help him write his memoir, and to just there to learn from him.

Shawn had thought he was going to be an attorney, so he took the L-sat, studied very hard, and applied to law school. He was rejected by Diego’s three law schools, which hurt a great deal. Then his best friend Corey, who had been with him in Spain, moved to San Diego and Shawn suggested Corey help him manage his grandfather’s real estate, which they started to do around 2006.

Early on invested in eatery with liquor license

Grandpa had purchased a property in East County, San Diego that had an existing restaurant, which also came with a type-47 liquor license, which allows you to sell beer, wine, spirits at an existing restaurant space. The license is very valuable in the San Diego market. They thought, if someone wants to open a bar, or restaurant, anywhere, the profit is in the liquor, which was a very attractive proposition for the two budding business partners. They decided to purchase the license for his grandfather, which at the time was valued at US$75,000, but they bought it for $50,000. They also raised another $50,000 to invest in the restaurant that was being operated by a man named Howard. He had been running a breakfast restaurant and Shawn and he had become friends. Howard was looking to expand his business so the partners said they would add the liquor license and help by including a dinner service and turn it into a sports bar.

The deal was this: Howard would run the restaurant and he would have majority interest, a 51% ownership stake in the company. Shawn and Corey had 49%. Young and naïve, and not knowing Howard nearly as well as they should, the partners started working at making capital improvements to the business, adding flat-screen TVs and products so that they could create a dinner menu, and hiring staff.

But Howard didn’t like many of their actions, and one day, after the guys had been installing some TVs, Howard blasted Shawn in front of customers, staff members and Corey. He accused Shawn of being lazy, inexperienced and spoiled. He regretted bringing in the liquor license and the partners, said he wasn’t going to pay Shawn back the money invested and that he was at the same time going to keep the liquor license. Shawn had never been spoken to like this and he and Corey had trusted the guy, and had put all their hopes into the restaurant business. But they had done it in a way in which they had no control. While they did it with the best of intentions, ultimately they were at the mercy of Howard, who held the majority stake.

Shawn turned bad to good, ends up recovering all

Even though this was the worst investment in his life, he turned everything, including an abusive voicemail, to his benefit. He kept the voicemail, played it, added it to his iPod and used it as his workout mixtape. For Shawn, it simply became motivation. Fortunately, Shawn filed a lawsuit against Howard to recover only the money he and Corey had invested but he was able to recovery everything, including the money and the license. After a year or so, Howard failed to make the location and Corey and Shawn took it over again, and it became Cali Comfort BBQ, which was the start of the businesses they are running now. The voicemail that Howard left became the intro to the first 30 podcasts episodes of Behind the Smoke. Shawn says if you’re going to be in the business, if you’re going to invest in things, you have to understand that there’s the human element, and that’s an element you can’t control. All you can do is do your best and you need to put yourself in a position where you can control the narrative.

“So my workout mixtape was this man screaming at me telling me that all I’d never worked a day in my life and that I was worth nothing.”

If you really want to play a part in a business, and it’s a business or investment you truly are interested in, get executive control. Make sure you and you alone or you and a trusted partner are the running the business. Never put yourself in a position of being without a majority stake and without control. I understand a lot of times, you have to raise capital and do things, so that you could get any business open. When you don’t have control, you don’t have creative flexibility.

Adapt to survive, pivot to thrive

If you don’t or are unwilling to change (in your business dealings or investments) it will be very difficult to operate any business, especially restaurants or bars.

Restaurants are risky investments but food of course is a necessity. Every village needs the local pub, every village needs the local eatery. It doesn’t matter where you are in the world, there’s a place that you love, that your family loves, that when it’s your birthday, your grandmother’s birthday, that’s where she wants to go, you have a special table, somebody makes you feel a way that’s memorable.

“If you’re going to be in the business, if you’re going to invest in things, you have to understand that there’s the human element, and there’s a human element that you can’t control. All you can do is do your best and you need to put yourself in a position where you can control the narrative.”

When we get excited about the returns and the opportunity, we often ignore the risks. Now Shawn having experienced what is truly at stake understands the risks a lot better now.

Whenever we go into business, we usually have to do it with other people. We must ideally want to find people that we trust. The most important thing Andrew has learned about trust is that there is no shortcut to building it. Ultimately, trust takes time. Remember, it’s actually a bit of a dilemma because looking at a business idea, entrepreneurs want to jump in, and often need to act quickly, but you can’t act rashly. By the same token you also can’t wait too long. But never forget that ultimately, you’re trusting the people around you to work with you, to get where you want to go.

Great idea to use failure and rejection as motivation

Success can be motivating, but being told you can’t do something or you get rejected, it can really put a fire in your soul.

A good entrepreneur knows that changing, pivoting or iterating must be almost constant in the quest to discover what really works in a business, and most importantly, what works for your customers. If you don’t iterate, you’ll eventually die.

“If it’s an investment that you are personally going to be involved in, from a business standpoint, from an operational standpoint, from a visionary standpoint, make sure that if you care about it, and love it and want it to succeed, that you have the majority, controlling interest and be ready to devote your life to it.”

His number one goal is to get his family moved into their new home.

Next is getting the Digital Hospitality podcast launched on a weekly basis.

Then he wants to launch his book in which he’s going to talk about all the secrets, missteps, the “Howards”, the failures, the lawsuits, the litigation, the funding, and all the things he and his business partner had to do to keep their doors open, in hopes that some other restaurant owner can read, gain some insight, and hopefully avoid the mistakes that Shawn and Corey made.

Stay curious and get involved.