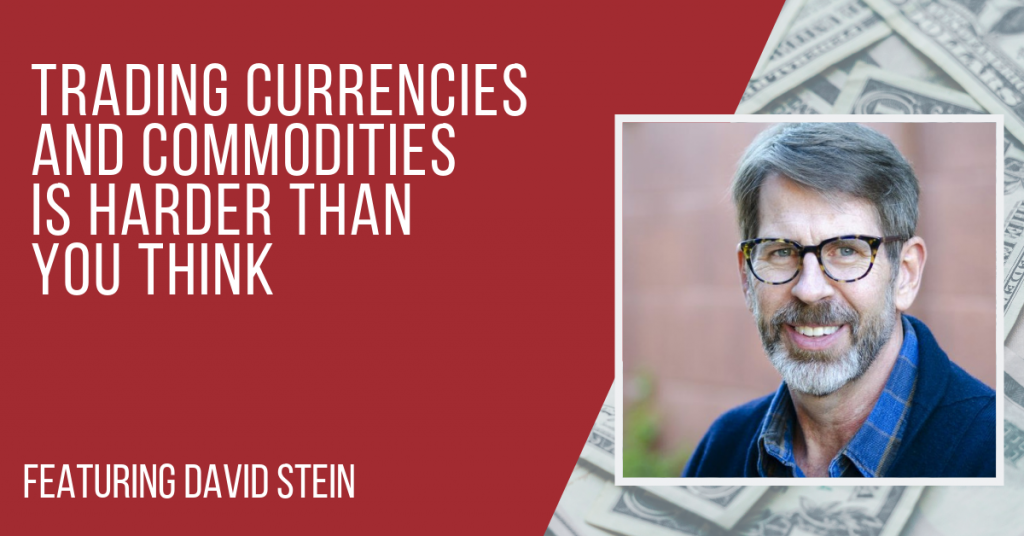 David Stein helps individuals to become more confident investors via audio, video, and books. For the past five years, he has hosted the weekly personal finance podcast, Money For the Rest of Us. The show has more than 250 episodes and more than 10 million downloads. David’s upcoming book, Money For the Rest of Us: 10 Questions to Master Successful Investing, will be published by McGraw-Hill in October 2019.

Previously, David was chief investment strategist and chief portfolio strategist at Fund Evaluation Group, a US$70 billion institutional investment advisory firm, where he co-headed the 21-person research group. David’s former institutional clients include The Texas A&M University System, the University of Puget Sound, and the Sierra Club Foundation. He lives in Phoenix and Idaho.

“And so I started trading and quickly found that it’s not that easy.”

David’s worst investment occurred during the transition period after he had quit the investment business and was trying to decide what he wanted to do in “retirement”. He had set up then shut down a few websites and had reached the point where he thought that even though he had retired, he could be a trader. He was experienced. At his prior firm, he was joint chief of investment researchers and money managers and trading was just part of what he and his team did, which included hedge funds and private equity. As his group’s head strategist, he would go to New York once a year and meet hedge fund managers, because he liked to see what they were thinking, to learn from their successes and mistakes and to see their take on the world.

About a year before he retired, he went to a commodities trading hedge fund housed in a Connecticut mansion. He met the founder and went to the trading floor. It grabbed his attention immediately. The floor was separated, with quantitative traders on one side and discretionary traders on the other. He said you could tell where the quants sat and where the discretionary traders say because the latter were messier and their desks less organized, but it looked like a fun and cool place to work. Then once he saw them at their desks trading, David got the idea that trading wasn’t that hard as he had had 15 years of investment experience.

So a year after he quit his job, he decided to be a trader in commodity futures and currencies options just to see how it would go. He knew enough to know that he would not be putting all his money into it, because he had known many people who had suffered huge losses in trading commodities. But he thought with his experience that he knew enough. He had economic models to use, and other investing tools, so he started trading and quite quickly found that it was not nearly as easy as he had suspected it would be. Some of the trades went well and some didn’t. The problem he found mainly with commodities and foreign exchange (Forex), gold, silver, and other precious metals, was the volatility. They trade almost 24 hours a day, it is extremely volatile, and there is no rhyme nor reason for that the volatility.

Decides to stop trading but forgets to close one trade

So he realized that there were things happening that were not at all like the investing he was used to. He had done fine, if fine is losing a little bit of money, but nevertheless he decided to stop trading. What he forgot was that he still had one trade in silver left open. It was a stop-buy order set up so that when silver fell to a certain price, the system would buy an open contract on silver that would go long on the metal. He had neglected to close the position, so the trade went as intended: silver fell to the resistance point and the system trading bought him silver (set up to bet that silver would increase in value), but then silver kept falling. Before he realized what had happened, he had lost around US$25,000 in this particular silver contract.

Good decisions are so due to processes not outcomes

At this point in his story, David is reminded of Annie Duke, who in her book, Thinking in Bets, makes a distinction between decision outcomes and decision processes. A good decision, certainly a good investment decision, doesn’t happen because it has a good outcome, a good decision is the result of a good process, he related, para-phrasing Duke’s argument. He did not have a good process for buying commodity futures and trading because he didn’t understand what the market was like. He thought he knew enough about investing, how commodities and economic trends work, but he admits that he really didn’t.

‘You must know who’s buying or selling and the volume’

He also recalled a professional trader telling him that no one can successfully invest unless they have “border-flow information”. In other words, that the investor knows who’s buying, who’s selling, and how much they’re buying. Even today, the other thing one must ask when they invest: “Who’s on the other side of the trade?” “Who am I trading with?” Benjamin Graham wrote in his classic, The Intelligent Investor, that he was trading with individuals, and that most individual stocks were held by individuals, and so he could get some type of informational insight. In David’s commodities trading career, he said, he was up against institutions, and mostly quantitative “bots”, algorithms that can act very quickly.

Sting comes from the fact he should have known better

David also recalls a quote from The Wall Street Journal that if a hedge fund that trades in commodities thinks their competitive edge is that they have a network of people who know what’s going on in terms of order flow, it’s a bit like saying you can deliver a package faster than Amazon. Like maybe you could at one point, but now you’re competing against robots, which excel extremely well in an environment in which there is no rhyme or reason as to why things are moving. That’s what David learned. He came out of trading a little wiser, and kept his remaining $25,000. The sting certainly came from losing the money, but in some ways knowing that he should have known better stung more.

“(US$25,000) That’s not a huge loss, but it stung because of how I lost it. Annie Duke in her book, Thinking in Bets, distinguishes … a good investment decision isn’t so because it has a good outcome, a good decision is the result of a good process. And I did not have a good process for buying commodity futures and trading because I didn’t understand what the market was like.”

No one should be trading commodity futures or Forex

Such instruments are speculative – a speculation is when there is disagreement on whether the return will be positive or negative.

Individuals should rather be focused on investing

Investing has a positive expected return, with usually some income component or earnings component. The key is to focus on investing. It’s fine to have some diversification and speculative forays for hedging. But if individuals bet their retirement on trading, that’s insane, because it is purely speculative, and that means you have to get everything precisely right to make money.

What do you know that the market doesn’t know?

Investors in individual stocks must ask themselves that crucial question. Most of the time, the answer is going to be: “Nothing!” It is insufficient to find a company or idea that you like; what is required is to find a company or an idea that you like that the market has failed to notice. And as the market and all the people working in it, is huge, that is almost impossible.

Investing in commodities or Forex is extremely risky

Don’t be a trader

But if you do, start off with a very small amount of money, and be prepared to lose it all, because trading is speculation.

Make sure you understand how it all works. Remember this too: If a person has or is a successful trader, they will not be teaching in a trading academy. They will either be working for hedge funds or they’re already retired and living on the beach somewhere. If someone is teaching other people how to trade, they are making their money teaching other people how to trade, they’re not making their money trading.

To sell enough books so he gets to write another one

He enjoyed the writing process of taking five years of podcast episodes and distilling them into the best 60,000 words. McGraw Hill has given him an advance and he wants to go out to sell enough books so that he can earn back his advance and do it again because it was fun to do.

“I just enjoyed being on your show. Thanks for having me.”