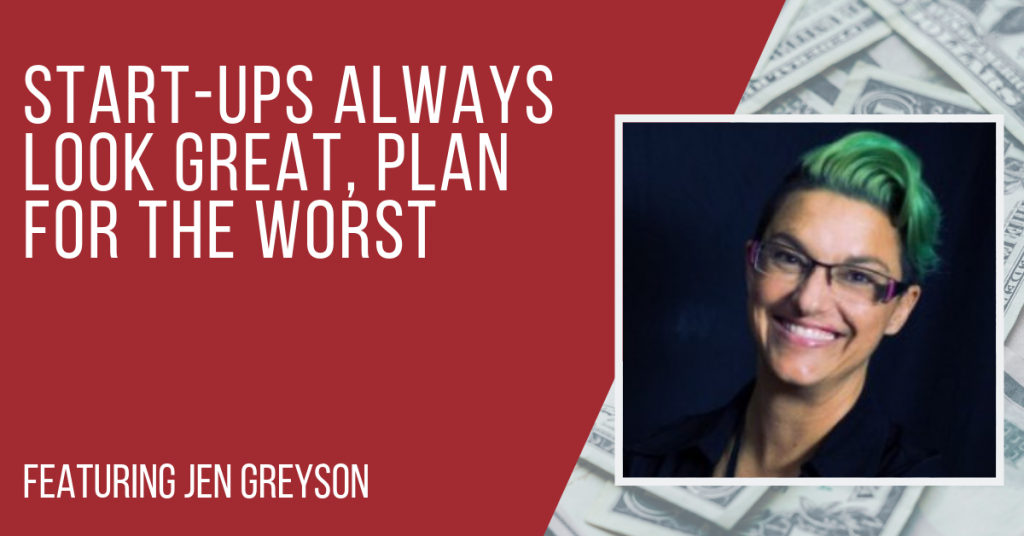 Jen Greyson is one of the top eight women in crypto and is a “genius at failure”. She’s currently running co.co, a start-up that’s the Airbnb of office space, speaks inter-nationally on topics ranging from AI to being a female tech founder and knows the struggle of being a working parent through the longest summer.

Chance meeting with computer engineer on an AI quest

About four years ago, Jen had built the perfect life for herself. She was a new single mom, was ghostwriting for an amazing client that she had had for a few years and worked one day a week. She would go hiking with her dog and had a great home on a lake. Then she met a captivating computer engineer who was into AI. Over long lunches she would hear from him about virtual reality, AI and things she thought only existed in science fiction. His goal was to build artificial intelligence “for good”, to create a level playing field so that a young person in Switzerland who wanted to use AI to complete a college exam had the same chance as a CEO working for a Fortune 100 company that could afford to pay huge bills.

The more she started looking into the idea, the more she liked it. She offered to help with his writing as she really wanted to be a part of the process because it was world-changing. She was also newly divorced, had a lot of freedom and was doing financially well. So she dug into his business plan and her business brain kicked in. She had run some big businesses but had left corporate America never wanting to return. He suggested one afternoon: “You should come run my company for me.” At this point, she was fully wrapped up in the idea, “had drunk the Kool Aid” and was excited.

While not wanting to get back into her pantsuit, the idea of reinventing the way corporate structures worked appealed greatly. So even though she would be running this company, it was a start-up and they would be doing it on the global stage using crypto. That community was very welcoming and she saw the potential of the project to have an impact on small businesses, so neigborhood stores to college kids and other players who really needed AI could have it. She had some money saved and the engineer didn’t but she decided to back the idea because she believed in it. They had a good plan in place, as with every start-up in the beginning. And the thinking, as with all new businesses was, in 90 days they would be rolling in money. Jen agreed to bridge the company financially for 90 days and took out some loans.

Costs sink in as deadlines pass and keep passing

They started having many major complications and Jen as CEO held the fiduciary responsibility. She started feeling uneasy about what their investors were getting out of the deal and that her partner was wanting to raise even more money. She also felt bad about the risk she was taking because the SEC was starting to look closely at crypto projects but their regulations were opaque, which meant even more risk. She was having conversations with lawyers in-house and around the world to navigate the regulation landscape. And Jen was personally committed to the tune of US$150,000, which made decisions difficult to make as a CEO without thinking about the money she was risking or that she had committed.

She was making decisions that might have been different if her money was not at stake. She met a mentor and, while she didn’t want to give up on the project, needed clarity. She had invested in it, believed in it, and truly wanted to have an impact on all those lives. The mentor asked her: “What would you say to a CEO in your position if you were coming on today as an advisor?” She was rocked, but it allowed her to look at the loss as a sunk cost and that her money was truly gone, never to be returned, and to ask herself what decisions she needed to make “today”.

She left that meeting able to separate herself from the disappointment, the hurt, the anger at herself and to unemotionally, unattached, look at the situation clearly. It then made the next decision easy. She handed in her resignation and that was the end of it, except that she had learned a lot of amazing things, and now considers it her “most brilliant failure” for sure.

“What would you say to a CEO in your position if you were coming on today as an advisor?”

Live a life with no regrets

Look at every situation as a learning opportunity

Always get everything in writing

Always assume a start-up is going to go bad

Always have an exit strategy

You must have a plan for when the start-up goes really bad.

Be close with the others in a start-up

Have a relationship with the people you’re going into business with or only work with people who know how to communicate and with whom there is mutual respect.

“Anytime you start a business with someone, it’s all unicorn farts and rainbows … Everything is glitter and beautiful and wonderful. And then, like any relationship, it gets hard and the honeymoon ends.”

Investing in start-ups (N0.6) is a very high-risk venture

Anytime Andrew looks at investing in a start-up situation, he applies this formula.

If there’s no trust from the start … STOP.

Money: If you don’t have money, you’re not going to get there. So you’ve got to have the runway that money provides.

CEOs may be risking everything

Normally what people say is: “I want the CEO to have skin in the game. I want the CEO to be aligned with the other shareholders and the other investors.” But the reality is that for CEOs, sometimes it’s all of their capital. Meanwhile others are investing perhaps just 1% or 5% of their total capital so the way they think is very different.

It can be applied to any part of life, even apply to relationships. Knowing what you know now (about this enterprise or relationship or job) would you still get involved with it if you just encountered it now?

Set deadlines and solid penalties if they are not met

Jen is 100% thrilled about her current start-up, mostly because she has some great partners. She’s excited to see that starting to change lives and is committed to creating spaces where people can work.

“Each of us can start changing the world.”

As a mother of two boys, she always wants amazing things to happen for them. And so she’s excited to see what they get to accomplish in the next year.

Every failure has a lesson. Learn it the first time, or the lessons will get bigger, harder and bloodier.