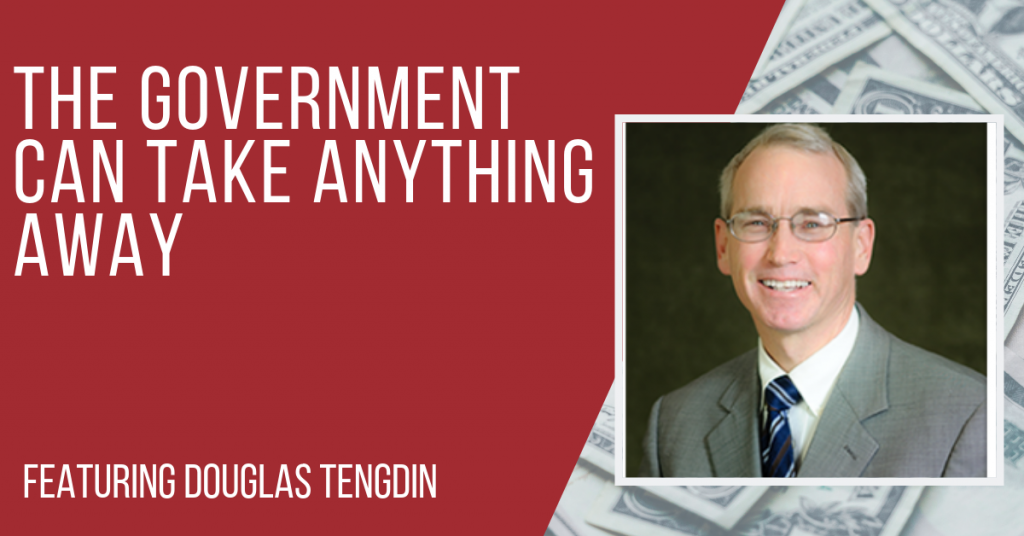 His first job in the investment industry was as a mail boy and securities runner in 1974. He has also worked as a bond trader, currency trader, mutual fund portfolio manager, bank treasury analyst and manager, and private wealth portfolio manager before becoming a CIO. He began to produce a monthly market commentary in 1993, and started blogging in 2007. His daily blog is called the Global Market Update and he produces a one-minute podcast and radio spot that accompanies it.

He has been married for 35 years, has six children whom he and his wife have homeschooled, and is active in church and outdoor activities. He currently lives in Hanover, New Hampshire, with his wife, their youngest son (about to enter college), and his mother-in-law.

“The government can take anything away. They’re not predictable. You may think you have a way of predict them but they’re not.”

Douglas says his story was not as much a terrible investment as it was memorable. It was 1988 and he was in his late 20s and a bond trader for a mid-sized US bank. He sat on a desk with other bond traders, and bought and sold United States Treasury securities during the trading day hoping to speculate on price movements, which are relatively random on any given day. He had built a lot of financial models using Lotus 1-2-3 spreadsheets, but he had created a lot of them, and they had macros built into them and macros that built other macros, and they were continually processing price activity, looking for clues.

Built models used to help his bank trade in treasuries

He had had considerable success with these models and had been hired to help manage the bank’s treasuries department. He was then invited to do the same thing for the traders and so he started doing that and making predictions. Then his leaders suggested he put a paper portfolio together to see what he could do, so he used his models and put the paper portfolio to work, with considerable success.

Then they put him to work trading live funds (real money). He was invested in two- and five-year treasuries. He would buy and sell those securities, going short or long, but he would always be ahead by trading day’s end.

He remembers the day well. It was August 1988. The market had recovered from the 1987 crash, and the economy was moving along. There was speculation about the future of oil prices, which had crashed in 1986 and they were starting to climb out. There were of course doing okay. But there were always “squiggles and giggles”, always turnarounds. So he had purchased the four-year Treasury bond, had watched the price move up and it was close to his return target when the bank’s Dow Jones newsprint machine sounded three “dings”, which meant there was a news item. Immediately following that alert, the machine dinged twice, which meant the US Fed has raised its discount rate.

Alan Greenspan was new to the Fed, and at the time the central bank was engaged in a policy of “creative obfuscation”. So he had been chairman for a year looking at the economic landscape and instead of adjusting monetary policy through the Fed funds rate, or through the money supply, which was what they were doing at the time, they occasionally changed the discount rate. That was a surprise. And Douglas’ modest profit in the four-year Treasury turned into a more than modest loss. He recalls seeing that happen and thinking: “How can they do this? Don’t they know that I’ve got a financial model that’s working and it’s working really well?” Besides that, it was the first part of the month and he had yet to make up his monthly profit and loss statement.

“And my modest profit in the four-year Treasury turned into a more than modest loss. And I remember seeing that happen and thinking, ‘How can they do this? Don’t they know that I’ve got a financial model that’s working and it’s working really well?”

Mind racing, brick in the stomach, wind sucked out of his lungs, numbness in his limbs. All the issues at hand flashed through his mind. The thought of being in the hole despite his risk-controlled position in four-year Treasuries to the tune of US$4 million made him feel like a brick had fallen to the pit of his stomach, the wind was sucked out of his lungs, and numbness in his limbs. All this and it could have been worse. He had not lost someone’s retirement savings, he hadn’t risked his institution’s capital, it was not a massive loss. But it was a very memorable moment.

Despite planning government action can destroy you

What was striking to Douglas was that despite all kinds of planning, all kinds of models, all kinds of fancy algorithms to understand what was happening, the news can and did hijack him and it can happen immediately. This applies particularly to the government, which has unquestionably a massive responsibility regarding monetary policy, financial policy and fiscal policy. They play a huge role with every modern economy. The government can change what it is doing and announce a change, and that announcement can have massive and instant effects on your financial position.

Position closed but colleagues cheered him up

Douglas closed the position right away and watched it. If he had the insight and experience to reverse it, he would probably ended up positive on the day. But someone told him once that “your first loss is your best loss”. He simply looked at the market to try and understand what the next dynamics were. The next dynamics were going to be price down, which followed through that day. The next day, he took a short position and started earning his way out of the hole that he had made. Some of his friends in the market had said: “At least it’s early in the month, Doug, and you’ll have a chance to make it back for your monthly book. And they were right.”

“Someone told me once that your first loss is your best loss.”

The government can take anything away

It is unpredictable and you may think you have a way to predict it, but you can’t.

Size matters (position size, that is)

Douglas’ position size was manageable, and he hadn’t taken an outsized position and for that reason he was able to earn it back.

We don’t know the future

We invest based on forecasts, but we have to be humble about those forecasts and remind ourselves continually that we don’t know the future.

If you think this won’t happen again, get out of investing

As the disclaimers say: “All investment carries risk.” And as Douglas said above: we simply don’t know the future, there are all kinds of things that can happen.

One thing an investor can say ask themselves is “how can I structure my next investments so I will not be exposed and this will never happen again?” The answer to that is such a structure would cost so much in costs or possibility of return that it would never make sense. Sometimes you just have to accept these types of losses.

Douglas was protected against devastating loss and could even recover his losses by the end of the month because he had sized his position modestly and carefully.

Governments can also lie or mislead

Case in point: During the Asian financial crisis in 1997, the epicenter of which was in Thailand, the government was announcing its foreign exchange positions, and people in finance thought it had US$40 billion. But it was not disclosing the forward transactions that actually, once unwound meant that in one day in March that 40 billion fell to seven. And then it was only a couple more months in the end of June, beginning of July, it said, okay, there’s no more money.

Douglas has a phrase on his wall that he created:

“Diversification is the compliment that humility pays to uncertainty.”

Answer to uncertainty is diversification

To continue to prepare ourselves for the next downturn

We can’t control the future. We can only control what we’re doing now (to be ready for an uncertain future).