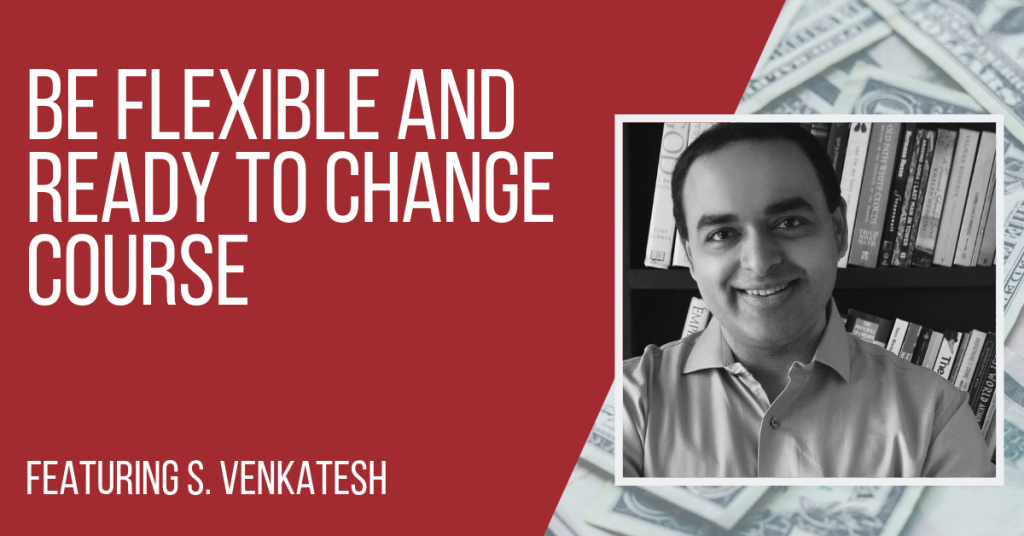 S. Venkatesh is an author, speaker, investor and entrepreneur. He has spent 22 years in the Asian markets in senior roles across listed equities (with JP Morgan and Credit Suisse), private equity (with Macquarie and AMP) and corporate strategy (with Masan Group). He is the co-founder of strategy consulting firm Dhyana Partners, and has served as a director on the boards of several companies. He is also the author of suspense thriller, KaalKoot: The Lost Himalayan Secret, which has been a No. 1 bestseller on Amazon.

In the listed equities space, Venkatesh has held several pan-Asia roles, including as head of India equity research at JP Morgan, and sector head for the Asian metals team at Credit Suisse and Deutsche Bank. He led the Credit Suisse Asian metals team to No. 1 position in the Institutional Investor survey in 2002. At Macquarie, he was a senior member of the team investing and managing US$1.2 billion funds in the Indian infrastructure sector, and was a director on the board and an investment committee member for the SBI Macquarie Infrastructure Fund. He led investments in Indian infrastructure assets at AMP Capital, and headed group strategy at Masan, one of Vietnam’s top-three largest private sector companies by market capitalization.

“Within a year both revenues and margins were under severe pressure and there was a fall in earnings. Eventually the stock halved so I lost 50% before I finally sold out last year. (This means) I held it for two years and lost 50%.”

In 2016, Venkatesh acquired what he thought would be a good long-term investment – and the company’s profile showed it had good potential based on its statistics and then-current standing. It was a large, generic-pharmaceutical manufacturer, one of the top three in India and 20th in the world. With sales of more $1.5 billion, market cap running into billions of dollars, good return on capital, great management, and an excellent track record, one could easily ask: “What could go wrong?”

“I felt that the company had things going for it: new product launches, and so on … so I dismissed the market concerns.”

Despite the company’s overall performance in its niche, its fundamentals and the sentiment toward it slid unfavorably. Venkatesh said, at that time, the US market was experiencing “huge pricing pressure”: a severe decline in prices and an increase in customer consolidation. In the same year, the US government also implemented stricter rules over imported goods and drug pricing. This led to “stricter inspections and adverse alerts”, which in turn equate to higher import costs, with the product demand remaining constant, if not gradually decreasing due to increased local and/or foreign supply.

Disregarding the red flags, Venkatesh held onto the investment, thinking that the market would eventually make a comeback, that the pricing pressure would stabilize and then return to its historical trend, and that new product launches would aid this recovery. He also thought the regulatory environment was a sentiment issue. This worked for the first few months. However, after a year, the effect of the changes in the US market was drastically felt in revenues, margins, and earnings, and after one more year, the stock’s value had halved.

“Rather than holding it all the way down, it’s better to cut losses and get out of a position that has gone wrong. But by the time I finally did that … I was already down 50%.”

Investing is a lot of hard work

Stay on top of your stocks’ fundamentals all the time. Even with the apparent safest company in the world, conditions can change very fast.

Pay attention to margin of safety in valuations

Sometimes at the top of a bull market, investors can feel that if the stock is good, they can pay more for it, which might work for some time. But with expectations so high, a small reporting change can mean that the stock corrects quite rapidly. A stock can still look as good or as inexpensive as it has been in its history, but if the company’s earnings halve, it can suddenly look very expensive.

Be ready to correct course

Keep a close eye on market concerns, and be ready to adjust your weight in a stock and cut your losses, especially if something is fundamentally changing. If Venkatesh had done that, he would have cut his losses earlier instead of holding on to it as it fell all the way down.

About changes: get past denial, accept and act

Accept when the fundamentals change, and avoid anchoring yourself to your old investment road map. Venkatesh realized that the time between his denial and acceptance was too long. When the expected stock rebound did not happen, he should have accepted the change and acted by taking money out of it and reallocating it into something with better long-term prospects.

“If something changes, and your thesis itself is compromised, you need to exit that.”

Collated from Andrew’s My Worst Investment Ever series, the six main categories of mistakes made by interviewees, starting from the most common, are:

1. Failed to do their own research
2. Failed to properly assess and manage risk
3. Were driven by emotion or flawed thinking
4. Misplaced trust
5. Failed to monitor their investment
6. Invested in a start-up company

Venkatesh took the route of trusting that his investment would grow on its own, and that the market itself would eventually rise up despite the stricter rules implemented on the pharmaceutical niche. That is not to say that he was careless, though. This leads us to Andrew’s second takeaway.

Being experienced does not mean you are perfect

Venkatesh has been in the business for quite a long time. From the many years he’s worked with various clients and stocks, he can be branded as someone who knows the market very well. Despite this, he is still human, and therefore is not immune to making mistakes.

Trend reversions do not always happen

It is a marvellous event for majority of the investors out there, that somehow, a stock will revert to its former glory. However, change is constant.

The investing journey has so many routes and detours that one small decision or event can quickly change your investment’s course. Not only that, but there are also unpredictable external factors that may affect the way the market will move. Thus, you need to always be alert and aware, and stay on top of your game.

Investing is similar to but not the same as gambling

People enter the investing business because they want to grow their wealth – a lot like gambling, if you think about it. In the same way, you need to set up your own strategy to be able to play. Moreover, experience is needed for you to know how the other players manage their game. The difference, however, is that in investing, you will experience an even greater loss if you’re not careful.

Be flexible about changing your investing road map and work really hard to monitor your investments.

Venkatesh is hoping to build the business at Dhyana Partners, to work with more clients and help with their businesses, their growth or their restructuring. His focus will be very much on the customer and delivering results for them.

He is also working on his second book, to improve his skills as a writer and express his gratitude to readers of his first release.

“It’s fine to make mistakes, but it’s more important to realize when you made a mistake, and to course-correct.”

Regardless of how experienced we are, there will always be times when we will poorly judge situations, or we let our emotions get the better of us. Thus, this leads to us making the wrong decisions, which is actually quite normal. During these times, the best – and probably only – thing you can do is to learn from those mistakes and ensure that you won’t make the same errors again through acquired experience.