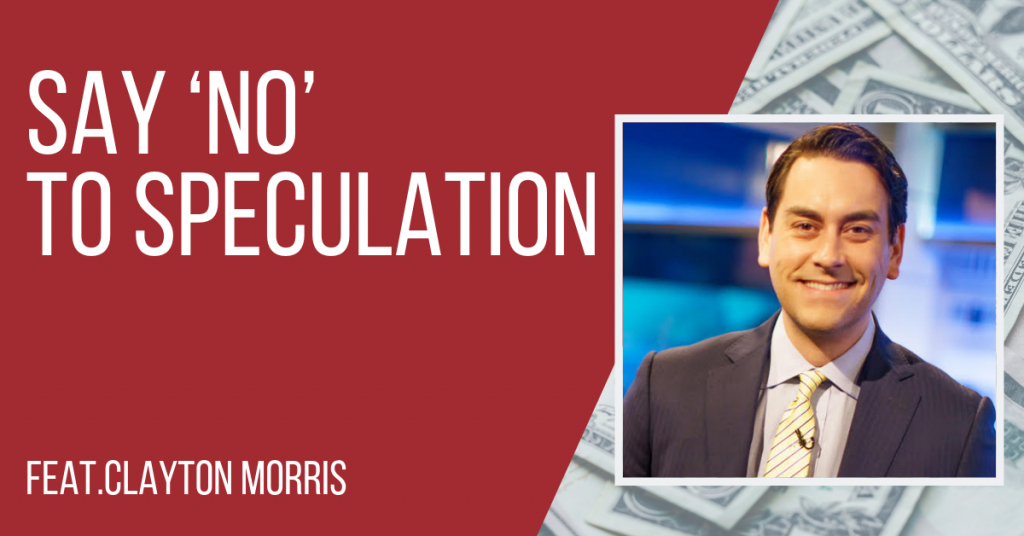 Clayton Morris is a former Fox News anchor who left the No.1 cable news show in its timeslot, Fox & Friends, after achieving financial freedom. Through his Financial Freedom Academy, Clayton now devotes himself to helping others build passive income and achieve financial freedom like he did using methods he had to learn the hard way. After some epic failures, he’s learned how to build a meaningful life and shares these lessons on his top-rated podcast, Investing in Real Estate with Clayton Morris.  At age 13, Clayton saw his dad unexpectedly lose his job. Ever since then he had a fear about money, and always knew there had to be a more entrepreneurial way of creating wealth. He got into purchasing performing assets to secure a future for his family so they didn’t have to go through the same financial pain as he did growing up. After years building enough passive income through performing assets to quit his high-paying media career, Clayton launched the Financial Freedom Academy because he realized his passion is helping others learn that they don’t have to just work for a paycheck, and they don’t need US$1 million to achieve financial freedom.

“So what happens to a lot of people that start to make money is that they quickly find ways to squander it because money flows to those people who take care of money … and guess what? Money flows away from people that don’t take care of it, and not taking care of it doesn’t just mean making stupid investments … it also means you … think you need to hold on to it like a hoarder.”

It was 2006. Clayton was working for Fox News’ The Daily Buzz program in Orlando, Florida, in the United States, when he caught the real estate bug. He had lived in and fixed up a one-bedroom condo on a golf course he had bought for US$75,000 since he moved to Florida in 2004 to work on the TV show. Then the woman in the two-bedroom condo next door died and her family were looking for a private sale as it needed renovation so he made an offer to buy it. Without any experience, he started carrying out repairs on the place every day after work. He then listed and sold them for the handsome profit of around $80,000 just before the market crashed. He had made a fortunate investment and definitely had the bug.

He then took that money and rolled it into a speculative land project in the beautiful mountain area of Cashiers, North Carolina. The project, a Phil Mickelson golf course community that a friend of Clayton’s had found in a backroom seminar in Manhattan required $30,000 upfront for two blocks of land on which two log cabins would be built with funds from a construction loan. The idea was that Clayton could flip the cabins and double his money. He was shown marketing materials on a website with running water sounds and visions of the proposed clubhouse and multiple phases.

Negative view on cash nearly makes him push it away

Clayton was feeling some emotional negative associations with money from his upbringing, which made him feel uneasy holding on to the profit he had already made. He said he never felt he was worthy of the money or worthy of success.

A short time later, while waiting for the cabins to be built, the market collapsed, the builder withdrew from the deal, and they had to find another builder. Clayton drove to North Carolina to see his plot of land and met a promoter at their “beautiful” offices in Cashiers town that had posters with a demonstration building, the construction phases, a log cabin in a field, and a lot of tea and coffee. They went to visit the marker where Clayton’s plot was and the clubhouse site which was also yet to be built and there was a wooden sign with a picture of a clubhouse on it. Despite the lack of any progress, Clayton could still imagine how good it was going to look.

But, just after the visit, everything started to fall apart: with a balloon payment coming soon on the construction loan, the economy collapsed. With it, the land value fell to very little, the second builder, Phil Mickelson, and the realtors all backed out, leaving Clayton apparently holding the bag. He had to go through deficiency judgment and foreclosure. One day while walking into Fox News, he went to buy coffee and because of the deficiency judgment against him, he found he could not use his debit card. He worked down the hall from national news figures Bill O’Reilly and Sean Hannity and went back to that office to log into his Bank of America account to find that everything was flashing red. All his accounts were frozen, meaning every single note of cash he had to his name was inaccessible.

Long climb back to financial health

He had to work with a lawyer to seek a settlement on the construction loan of nearly $200,000 but his property was not worth $5,000. No community had been built, and some other people had been built, and other similarly abandoned people were reaching out to form a class-action lawsuit. Sadly, to be party to the suit required another $10,000 as a buy-in, but Clayton decided to just walk away. He eventually paid off the loan and had to put the entire painful episode behind him. He said of course he never wants to repeat it.

What Clayton did was a speculative land project with the hopes of a clubhouse and waterfalls and there was no substance to it. He learned from this, got creative, and now only buys performing assets, in established neighborhoods, renovates them, and takes his $900 a month in cash flow from each. He buys assets that actually exist.

Extent of his speculation

He was betting big on many hopes:

Focus on one course of action

Stick with what you know. Don’t let “shiny-object syndrome” get you off track.

It is in what he calls his “Motivation Monday” broadcast, where you can hear a short inspirational piece about “the color of your thoughts”. In this episode he presents the very powerful idea of the three stages to go through when you really want to achieve something, 1. Ask for it, 2. Receive it, and 3. Allow it to happen.

Loss is a fact of life

Even people in prominent jobs with big careers make mistakes. The feelings that come with such mishaps can be devastating, overwhelming. But don’t face such times alone. Other people have been there, other people will be there, so reach out for the help and the support of friends, family and whoever you can.

External factors can have severe effects

Impacts outside your control, such as a collapsing economy, can have an immense impact on your investment and can cause everything to go wrong unexpectedly.

Beware the curse of winning

When we have some wins it can make us feel overconfident. It happens a lot with many of the stories in Andrew’s My Worst Investment Ever series. When investors first buy in to an investment and it goes up they feel confident, usually more confident that they probably should.

When we are craving something or thinking about it so much, that can have the opposite effect on getting it.

This is No. 2 of the six common mistakes that Andrew has gleaned from the My Worst Investment Ever series: Failed to properly assess and manage risk. Investors may find a project and assess the risk as being reasonable, but the problem is that in many cases, people put all of their money into it. In real estate, this is probably a little harder compared to buying stocks in the stock market, but the point is to make sure you size your position so that you are not putting so much money into one project or one target investment. It should also be remembered that your sizing of the position is not the initial down-payment, it is the final payment that must be made when the property will transfer.