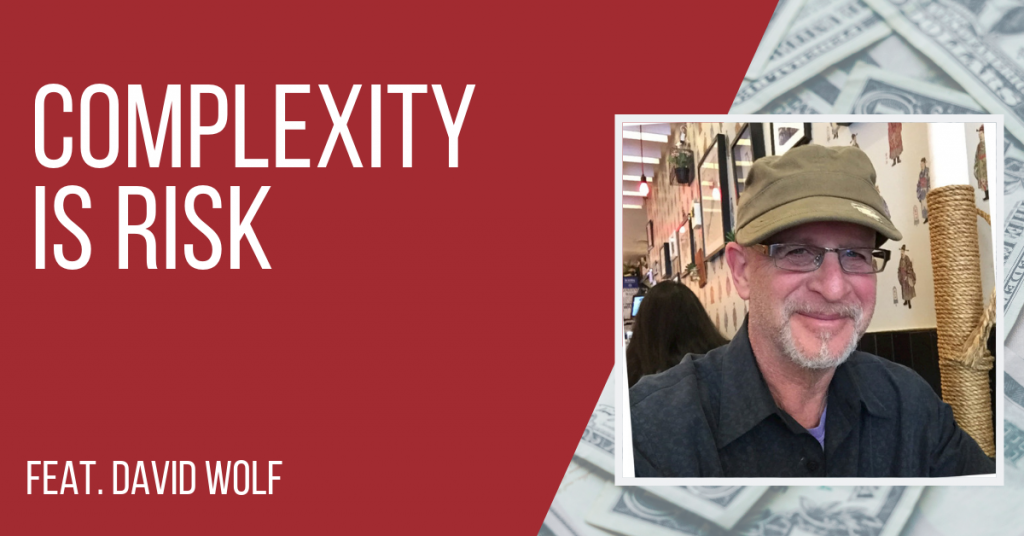 David Wolf is the founder and executive producer of Podcast and Radio Networks. For more than 32 years, he has been the creative director, music composer, and or producer of content for radio, TV, film, podcasts, audiobooks and multimedia. He has been hosting the Smallbiz America Podcast since 2005, which is now syndicated coast to coast in the US on BizTalk Radio Network and on Smallbiz America Radio.

Today, David applies his experience along with the skills of his virtual creative team to help companies, organizations, entrepreneurs and thought leaders grow their brands and businesses through podcasting, audiobook production and internet radio.

“But as you know from hearing these stories, we get emotionally connected to the idea that we can save the idea we thought was the right one.”

David, his wife and their two boys were living in Dallas, having moved there from Chicago in 1985 after their marriage. They had built together a successful business producing music for big name brands such as McDonald’s, Southwest Airlines, Chuck E. Cheese restaurants, Exxon Mobil through advertising agencies as primary clients. They also did work for children’s programs, such as the Barney the Dinosaur shows.

Music operation builds to more than half million in annual revenue

Upon arriving in Dallas, the keen 25-year-old David worked hard at building his music business, spending 85% of his time driving sales, meeting new people and getting them his music reel. The rest of the time was spent in the studio. With his wife Phyllis, a virtual team, and a collection of musicians and singers, David built up to a peak top-line revenue of around US$650,000 a year.

Around the time he turned 36, he and his family decided to move to Santa Fe, New Mexico, physically moving from the market that was supplying revenue for his business. He admitted failing to fully appreciate the amount of money the business was generating through the creative work and overlooked considerations of capital preservation. Riding the wave of past success, they moved but eventually the reality of being removed from their market dawned on them, so they decided to move back to Dallas to try to regenerate what they had started around a decade earlier.

Return to Dallas fails to recreate past wins

Back in Dallas, they could not generate the kind of success they had seen before. There was new competition in the market and David and his wife were older, nearly 40, which in that business is considered a little bit old because the decision makers in ad agencies are in their 20s or 30s. So the relocation failed to take and they found themselves asking the question: “What are we going to do?”

Then, possible light shines from the dark. David’s brother in Albuquerque, New Mexico invites him to get involved in a popular retail and wholesale bagel bakery brand in Albuquerque and Santa Fe that had been run by their cousin but had gone bankrupt after trying to grow too fast. David’s brother understood the bakery side of the business; David did not. He did however know how to market products and was drawn to the idea of something completely new in distributing an edible commodity.

So he and his family moved back to New Mexico and negotiated to buy with his considerable savings the assets out of bankruptcy for around $75,000. He also was attracted to the business as it had been generating $3.2 million at its peak, so it felt like a good idea. But it was a very complex business that required knowing a lot more than he realized, with 30 employees, wholesale purchasing, and retail leading to far more complex accounting than his previous experience of getting a creative fee and then paying musicians had required. But David learned a lot and was excited to do so. The media picked it up as it had been a very popular brand, had seven retail stores, and they were selling to businesses such as Cisco, Shamrock, Whole Foods, and Wild.

So he walked into an infrastructure set up to make the product and he was blind to the complexity and risk that he was undertaking. That said, the recipe was great and there were a lot of underserved people in the local Jewish community. Even so, the massive chain, Einstein Bros. Bagels had entered the market and had tried to buy out the cousin. The large publicly traded company began to do better than his cousin’s company, mostly because they really knew how to run a chain of stores.

After the bankruptcy proceedings, they found themselves with a 12,500-square-foot warehouse, far bigger than the company would ever need. They tried to get around their competitor Einstein through wholesaling while learning how to do so and bleeding money in paying rent and for utilities for the massive building they occupied. They raised loans, David used his own retirement savings, they brought in an investor, but after eight or nine years, David had to surrender. Even though it was the worst investment he has ever made he is very grateful for the experience and believes he’s a much better business person now because of this adventure.

Working with family either works well or fails dismally

His brother and his wife, David and his wife formed the top management team, in what David admits was a clearly flawed model for many reasons. Some of it he put down to personal chemistry, but in many cases he blames the idea that you have people doing jobs that are inappropriate to their skill sets simply because they are family members. David was technically the CEO, had strong marketing and communications skills, picked up the financial side, raised the money and organized the banking. His brother and wife were bakery people, but they wanted to be equity partners without having any capital to inject. This created many problems because they were employees who were owners at the same time. There were emotional drivers as well as he truly desired to help his brother who had had mixed fortune.

David was feeding his losses with his retirement funds, all the money he had made amassed from his music business when he was doing what he loved and had knowledge and experience with. He fed the flailing business in the belief that he could save it and in doing so, help his brother as well. It was a painful ending. When the business lost one or two of their large wholesale customers, he decided around when the 2008 crash was happening that he had had enough. He was depleted and exhausted. He filed for Chapter 7 bankruptcy and with his family had to do a complete restart in life. He admits being emotionally connected to the idea that he could save the idea he thought was the right one.

“I really learned a lot about business in that very painful 10-year period.”

Stay with what you know. Don’t chase the money, don’t chase the deal. Be really sure that you are rooted in, something that you can live and breathe in a very full way. David had been really successful as a music composer and a creative professional, but he is still not entirely sure why he veered off and walked away from a business that he was renowned for and that he was skilled at. He explains that he failed to fully understand the destructive nature of walking away from what he had already had experience and success in.

“And so that’s one lesson, to really ask the question: ‘Do I know enough about this other thing?’”

But he had his reasons: He was 40, burned out and quite tired of creating on demand. Just trying something new also seemed a sufficient reason.

Really evaluate and probe the idea of bringing family in to a business. Make sure that the right people are doing the right jobs. David himself on his own podcast has interviewed experts in family business dynamics that say involving family either works well or is a complete disaster. So in his case, it was the latter category.

“I underestimated the risk of bringing family in, even though it sounded like a beautifully euphoric idea.”

Never underestimate the complexity of a business you are investing in. David threw himself into a business he knew very little about and then relied on his brother for knowledge about baking.

Examine the fixed expense base thoroughly. David said he was foolishly optimistic that he and his family team could grow the business and underestimated many of the costs involved, especially plant rental and warehousing costs.

Hold cash flow as sacred once you have it. Coddle, cradle, nurture, hold as on to and keeping building it. It is so hard to create cash flow in the first place that, when you have it, make sure you take care of it, build it and protect it. Most of all, never walk away from it for any reason.

Complexity is risk. Andrew says he and his coffee business partner are always discussing ways to reduce complexity. He said he witnesses risk building up in areas of their business when complexity is growing.

If you feel costs getting too high, cut them immediately and massively. Andrew cites Gary Sutton’s The Six-Month Fix for this takeaway, from the front of this book about turning businesses around.

“If you’re the CEO of a struggling business, let’s hope we never meet. I’m Gary Sutton, a turnaround guy. When I arrive you leave. Results usually get better and fast.”

You have to focus on right person, right job. Andrew says this is critical for family and business in general. Bear this idea in mind constantly. Another way to think about this, and it’s very important, is to ask yourself the question:

“If somebody bought out our business, and they were going to run it, would they put us in charge … or would they go out and find a different person?

Peel back the layers of your emotional onion to really understand why you’re making a decision, whether that decision is to buy a business, turn a business around, start a new business, get into a franchise, or start a hobby and develop a business model from it. Really understand the why behind the direction you are about to take. Because, if you’re not emotionally connected to the purpose of the business, it could really hurt you down the road.

Do not underestimate the power of complexity and the power of risk. Risk shows up in a lot of insidious ways so try to determine what you don’t know about the path you’re about to take.

To quantify his objective. David is building a virtual team while building his business and he’s received advice to do this.

“I’d love to see it hit the quarter-of-a-million dollar top-line mark, because our gross margins are looking really good.”

Andrew on goals in general

“I highly recommend for yourself as well as listeners, and I try to keep myself to this:”

“I’m grateful for the opportunity to tell this story because it helps me really internalize it and point to the future, as you (Andrew) suggested. So thanks for having me.”