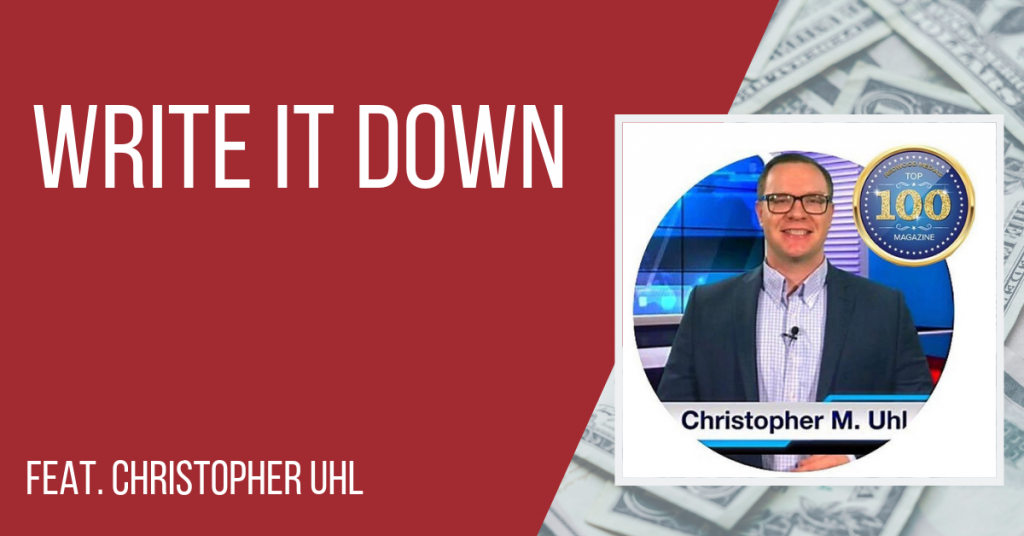 After graduating from college at perhaps the worst time in recent history, Christopher Uhl began his decade-long career in the world of corporate finance. Having become a Certified Management Accountant (CMA) and yet feeling unfulfilled by corporate life, he decided to follow his passion for trading stocks and options and created this website, 10minutestocktrader.com, in 2017. There he teaches aspiring traders how to manage a stock and option portfolios in only a few minutes a day through his free courses and access to his completely open and transparent portfolio.

In 2018, Christopher created the How To Trade Stocks and Options podcast, a top-25 investing podcast that is broadcast daily and dedicated to teaching the tools, tips and tricks to help his growing audience trade faster and trade smarter. Finally, Christopher was honored in Redwood Media Group’s The Top 100 People in Finance magazine. Christopher is following his passions and using the power of the internet to generate multiple streams of income while continuing to expand his influence and network. He holds a BBA and an MBA from Henderson State University in Arkansas, United States.

“There’s no reason to think that you’re smart enough to pick the bottom. You’ve got to be able to see what’s going on … and reverse the course if you have made the wrong choice. Be true to yourself, figure out that you are wrong, make adjustments and move on.”

Confessions of a reformed contrarian investor

Christopher’s story is quite recent, starting in the northern hemisphere’s summer of 2018. He had his website 10minutestocktrader.com operating, and life was going well as he looked for trades. Historically, when he had worked with other traders, he had developed a contrarian trading style. So if someone said they liked the commodity “corn”, for example, and they were going to bet on the price of corn to go up (to go long), Chris would say: “You don’t know what you’re talking about, I’m going to short corn.” Meaning he would invest on the idea that corn’s price was going to fall.

So last summer, gold was in a clear downtrend. Chris called its fall so “glorious” that if anyone had traded on that trend, they would have made a lot of money. But Chris thought he knew better and this was where all his problems began. So as he was looking at gold he noticed it had a high implied volatility rank. He explained that when selling options, one of the things he looks for is such a high implied volatility rank.

Of entire account, investor puts 60% into a long position in gold

Based on its high implied volatility rank, he believed gold had found its bottom and he decided to go long. His contrarian attitude looked at the trend and he decided to go the opposite way, for no reason than that it was his trading style (which he now says he has completely scrapped). He then went on seeking confirmation on Twitter, “a terrible idea” from which he has also learned, trying to find as much justification as he could for his bet and trying to find other people who were also going long on gold. Percentage wise, of his entire investment account, he had committed more than 60% into a long bet on gold and he admitted being excited about it.

Another error was that when inputting the trade he accidentally pressed four as in four contracts on gold instead of two, but left it as is thinking it would be fine. He then scanned Twitter every day to make sure everyone in that sphere agreed with his gold position. All this came in spite of undeniable evidence that gold was going down every day. Chris admitted to overconfidence and thinking he knew better than the market when the market was saying loud and clear that its direction was down, down, down. Chris has told this story many times on How To Trade Stocks and Options but he has never spoken in this much detail about it.

Gold drops 2% in a day while investor is on vacation

With all his contracts investing in the idea that he had picked the commodity’s bottom and that gold would go up from there, he went on vacation. While away, he received queries about how the trade was going, to which he replied: “Things are going great. Hitting all-time highs in the account and everything’s wonderful.” One day, he pulled up the trade on his phone and saw that gold had dropped a massive US$22 that day, a 2% move. Amid a sinking feeling, he asked himself the question sitting in the hotel in Orlando about to visit Disney World: “Oh, geez, did I just do something wrong?”

He finally cuts his losses after doubt murmurs for too long

Almost in denial, he admitted that the worst part of that was his inaction. He didn’t want to deal with his mistake because he was on vacation. But in the back of his mind, he was thinking: “What have I done?” When he and his family returned from Disney World, he watched as gold slid from $1,300 an ounce, to 1,250. Then it fell to 1,200 and he continued to hold his position the entire time. It fell further to 1,180 and 1,160 and, at some point, he realized he had to stop because the bleeding had gone on for far too long and he cut his losses.

With nine years of trading experience, he blew around 60% of his portfolio

Chris had been trading for nine years at this point and he didn’t know why he just decided that he was ready to use 60% of his account, which he called way too much and then decided to look to Twitter in one of the standard types of errors made in investing, which he pointed out was confirmation or recency bias. He noted he was on vacation, so he let things go, and that rather than having a stop loss in place and cutting his losses amid clear indications that the market was right, he decided to let it play out, even though there was absolutely no reason for it to turn around.

It could have been a perfectly normal trade

In the end, he took what could have been a perfectly fine trade and turned it into a big loss. He could have simply used his trading plan to put on a trade, see that it was not going his way, cut his loss, and move on, perhaps investing in the other direction. Instead, he took what could have been a small loss and let it turn into the biggest loser he has ever experienced. He said that what also made it a loser was that he lost a lot of sleep and gained a lot of stress, all while he was supposed to be getting away from it all on vacation with his family.

Find trading tools and write a trading plan that best suit your personality. Chris learned the hard way that that he had been trading for years without a plan. Your plan must include asking yourself vital questions such as: What are my entry levels? What are my exit levels? Why am I entering? Why and when would I exit?

Objectively look at your plan, charts, information and circumstances. Then you can act beyond ego and personal bias when you really need to change course, and not be emotionally wrapped up in a trade.

Your plan must include having a set of risk parameters in place. But you have to stick to your own rules and hold yourself accountable when things change so that you can adapt with that change and not let things get out of control.

Be extra cautious about calling a trend reversal. Andrew’s PhD thesis was basically on this topic, that analysts have almost no ability to pick a trend reversal. His original title was: Analysts are only wrong by 25%. The research he did looked at all companies across the world, at all analysts across the world, for a period 13 years previously. He found that analysts would generally forecast that a company would make say “125”, then the company would make “100”. So they were optimistic by 25%. You hear a lot from analysts when the market flies, but those same analysts are nowhere to be found when the market crashes.

Having a plan is vitally important. Most serious professions never start doing anything without a plan. But many people in the stock market, beginners and even the experienced, just rush in with no plan at all and throw money at an idea.

Andrew’s six-step plan for making a sound investment. During the time Andrew has run this podcast, he has learned a lot from guests, so much so that he has designed six steps to investing, the essentials of what makes sense to him from the lessons learned:

“Investing in the stock market is … a roller coaster. And some people decide that they’re going to be right in the front car of the roller coaster; those people are trading and really focused on the market … it can drive them up and down like crazy.”

Take the time to make a comprehensive plan of entry and exit, and then hold yourself accountable to that plan.

Chris has not one but nine goals and here is his plan for achieving them:

It just takes time and a portion of his day. All he needs to do is set aside that time. He has found that this method has made the biggest change for him so far in 2019. His goals have become clearer every day because he is taking these actions daily to realize them.