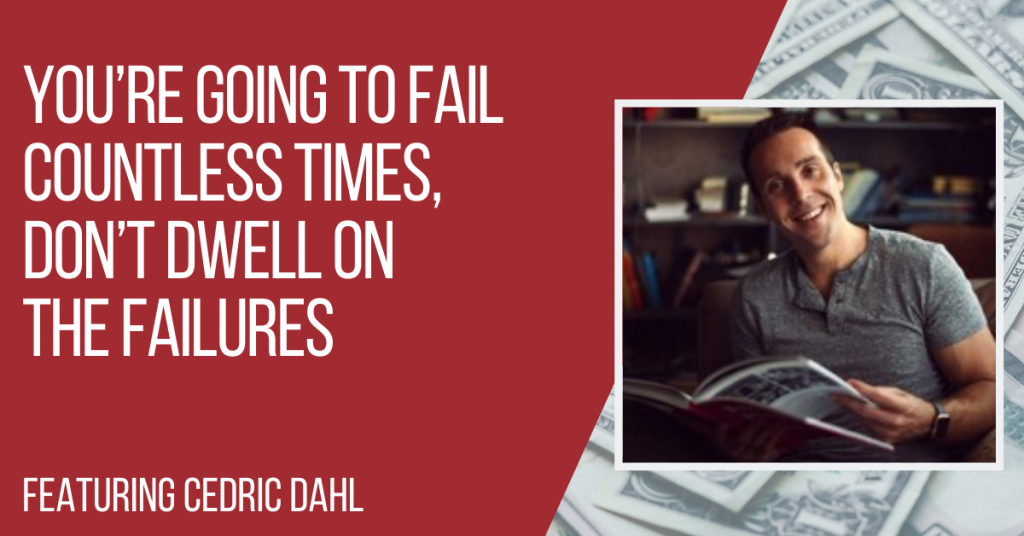 Cedric Dahl is a normal guy who got lucky along the way. He ran one of the first Bitcoin marketplaces in the US with legacy banking and regulatory visibility, all done with Google Ventures & Y Combinator backing.

“Whatever it is that you want to do in life, you just gotta show up.”

What’s all this Bitcoin business?

The first time Cedric heard about investing in Bitcoin was in 2009 when his close friend Bennett came to him excited about this new trend that was making people rich. To Cedric, it all sounded like a get-rich-quick scheme and he didn’t pay much attention to it.

His friend, however, kept insisting that he should learn about it. So for a week, he tried to explain it to Cedric, but it was too hard to understand even though he’d gone into a huge amount of detail.

He just couldn’t get it

Cedric went over everything three or four times to try to boil it down to a language that he could understand. Finally, he started to get it, but it all seemed like a stupid idea to him. So he refused to buy into the idea and kept ignoring his friend whenever he would talk to him about investing in Bitcoin.

Right place at the right time

Sometime in 2011, Cedric and Bennett were in Silicon Valley. They had just failed an interview with Y Combinator and so they were down in the dumps about it. They were staying with friends while in Silicon Valley. Bennett was like this beacon of light where he could explain this Bitcoin thing to everyone he saw. He was getting really big crowds of people around him. He was becoming a kind of a figure in Silicon Valley who could explain Bitcoin and digital currency. Cedric still barely understood it and thought it was dumb.

Cedric, however, felt that he and Bennett would make something out of this new trend. He figured that using Bennett’s charisma and ability to explain this confusing digital currency; they could help people buy it. People thought it was a splendid idea. Soon they were working with tech founders, angel investors, and venture capitalists.

One of their clients gave them $100,000 and asked them to start a Bitcoin market place. So they did it, and before they knew it, they had all of these investors rushing to use the marketplace. All along, Cedric was still truly clueless about the value of Bitcoin.

All of a sudden, they had more than a million dollars. Now Y Combinator was paying attention to them and even reached out with an unbelievable offer. So many other investors were also giving them offers to invest in the company.

The imposter syndrome kicks in

Cedric still had no idea what he was doing, and the more things were going well, the more he felt like a fraud. He started panicking and worried that people were going to find out that they didn’t know anything about what they were doing.

At the time, Bitcoin’s price kept going up and up and so did Cedric’s stress levels. However, the business was doing great and so they decided to sink more money into it. This time they went big with the hope of raising more funding from venture capitalists.

As they were getting ready to raise money, a competing company Coinbase announced the day before they were going to start fundraising, and that they had just raised an upwards of $70 million. So they had a war chest of about $120 million. The air was sucked out of the room. And just like that, their startup was dead.

Cedric was in denial and insisted that they keep going. He put his money into the business and tried to keep going, but it didn’t work, the timing was simply against them. He was crushed. He felt like he’d let down all of the people that he worked with. He was so heartbroken and beat himself up about it.

He felt so responsible and blamed himself. And for the next two years after the startup shut down, he kept beating himself up about it.

Soon enough, he realized that his worst investment wasn’t the company that he had lost, but all the time he had wasted dwelling on that one failure. It dawned on him that the pain that he was feeling was possibly the worst ever. So no matter what he tried next, even if it failed, it would never be nearly as bad as that feeling.

And so finally he got the courage to try a bunch of things, failed a couple of times, but he didn’t care and kept trying.

No matter how successful you are, there’s always a giant element of luck, and you cannot control that luck. So don’t fret it if luck is not on your side, it will come by soon. Stay in the game long enough so that you can get lucky again.

Risk management is important whenever you’re investing in anything. You don’t want to make any huge risks that will take you out of the game that you enjoy.

You can’t get better if you don’t practice and you can’t practice if you don’t start. The hardest part of any endeavor is starting, and in anything, starting is just showing up. So whatever it is that you want to do in life, you just gotta show up.

You got to stay in the game

It will be hard at first; challenges will be many, but you’ve got to stay in the game to succeed. Have the courage to stick with it.

Remove stress from your life

Stress kills, so remove it from your life. Don’t stress over what you don’t have control over and change what you can and move on.

In life, you are going to either win or fail and learn. To stay at the top of your game, minimize the gap between your failure and your next attempt. Don’t dwell on the failures; instead, focus on the next venture.

Cedric believes that we’re at the beginning of the end of cryptocurrency and is curious about government adoption of crypto. His goal this year is figuring out if this is real, and sharing his story and findings with others.